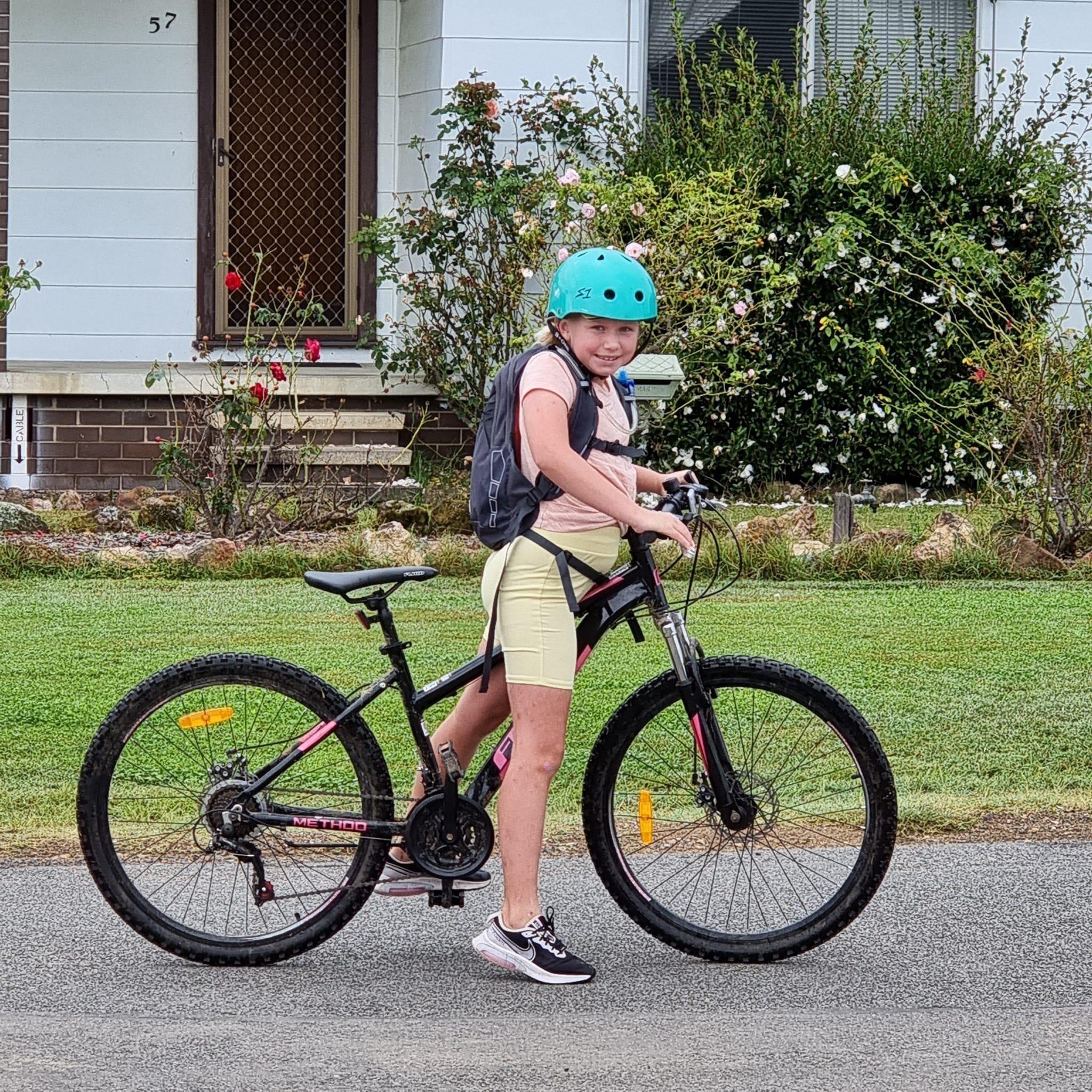 This month the Complete Parts and @ The Coalface $500 Community Gift goes to Jewel Harrison-Northrop. A young girl on a mission and on a bike!

The Bellbird nine-year-old is in training with her family for a bike ride of more than 100 kilometres in October to raise money for the Cancer Council’s Do it for Cancer appeal.

During lockdown last year, Jewel decided she wanted to do something great in memory of her nan, her father Andrew Northrop’s mother Robyn, who died of cancer aged 69 in 2019.

“I decided to do something for cancer,” Jewel said.

“My first idea was a dance marathon, but then I thought that as the family loves to go bike riding, why not try a ride? Since then, we’ve been training every day for the ride from Bellbird to Hawks Nest – that’s where my pop, mum’s dad, lives.”

“It’s become a really big thing and something we can do as a family. We can focus our grief on that, but it’s a great feeling to be able to do something good in memory of Jewel’s nan.

“We’re really pleased that @ The Coalface is supporting Jewel’s campaign, as she’s from a coal mining family – her dad, aunty, great-grandfather and grandfathers on both sides either still work or have worked in the coal mining industry.”

The family has been training since last year for the two-day ride which will start at 6am on October 1 – day of Jewel’s nan’s passing.

“We’ve been riding most days,” Jewel said. “The most I’ve ridden for is 46 kilometres, but if it’s raining, I’ll train inside on an exercise bike.”

One training ride she does is from her Bellbird home to Aberdare lawn cemetery and back.

“That’s where my nan’s buried and I wave to her. I think she’d be pleased with what I’m doing.”

The ride will be in two stages – 80 kilometres from Bellbird to Karuah with a night stop and then 26 kilometres from Karuah to Hawks Nest, finishing the 106-kilomtre ride at Winda Woppa.

Jewel won’t, of course, be riding alone. Her mum and dad, eight-year-old brother Banjo and four-year-old sister Dot will also be along for the ride.

“Dot usually rides on the back of a bike, and I think she’ll ride in our support vehicles,” Jewell said.

Jewel’s aunty, uncle and cousin will also make the trek, along with support from sponsors Gormo’s Mechanical at Rutherford and Tempest Bikes in Weston.

Melanie says the support from the whole community has been amazing.

“It’s definitely turned into a community activity. Bellbird Metro has collected more $1000 in donations and we’ve been collecting cans and bottles for Return and Earn.”

What started as a modest fundraising total of $5000 was quickly passed, then a new target of $7000 and at time of going to print, Melanie said donations were closing in on a third target of $10,000 on the Cancer Council’s Do it for Cancer fundraising page.

“The ride is inspiring the family and I hope it also inspires other people to think about what they can do for a community. If a family from Bellbird can do something – then any one can do it.

“Banjo is also thinking about what he can do to join his sister in fundraising. He’s thinking of a 50-kilometre run!”