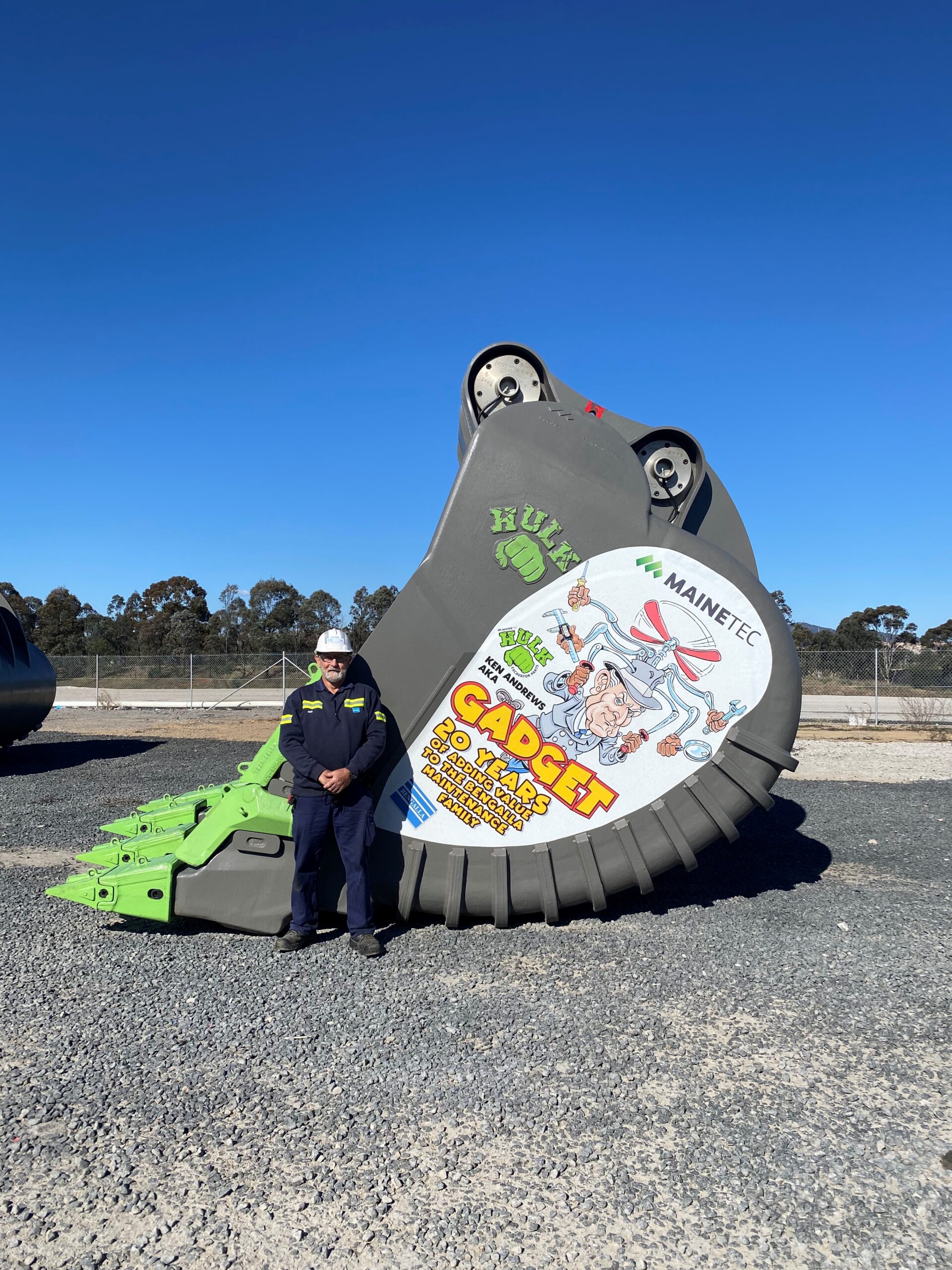 In partnership with Mainetec, Bengalla Mining Company have celebrated the arrival of a new EX5600 Hulk Bucket with a ‘Gadget’ tribute revealed to commemorate Ken Andrews’ 20 years of valued service with Bengalla.

On Thursday July 29, 2021, Bengalla unveiled their latest investment into greater productivity, a new EX5600 Hulk® bucket. Built by Mainetec, the bucket has also been finished with a fitting cartoon image of Ken Andrews, or ‘Gadget’ as he’s known on site, as a tribute to his 20 years of service with Bengalla.

A longtime member of the Bengalla family, Ken Andrews has worked in the mining industry for almost 52 years, commencing work at Bengalla in 2001 as an Operator Maintainer and then Maintenance Technician.

August 2012 saw Ken move into his current role as Offsite Repairs Officer overseeing and ensuring quality assurance from Bengalla suppliers for engine and component rebuilds, as well as bucket repairs and purchases for the excavator fleet and dragline.

The nickname ‘Gadget’ was coined by one of Ken’s mentors, John Nichol who set himself a goal of giving or stumping Ken with a gadget that he didn’t have or know of. Always keen for a new tool or a way of doing a task safer, Ken has plenty of gadgets to aid this mantra.

“Ken is a big part of the Bengalla family and is usually the person behind the scenes doing things for others, so we thought it was time to honour Ken and surprise him with the bucket,” said Ben King – Maintenance Capital & Projects Specialist at Bengalla.

“Bengalla had been looking at the Mainetec “Hulk” buckets and capital was approved to go ahead with two replacement units for our EX3600 and EX5600 fleets.

“The buckets normally come dressed in a big HULK logo; we reached out to Mainetec to see if we could have this changed and the ‘Gadget’ concept was born.”

Ken has had many defining moments during his long career, from his first role in the industry as Apprentice Mechanical Fitter/Machinest in 1969 at Muswellbrook Engineering to moving into a Field Supervisory role with P&H Minepro, managing the maintenance on the Bengalla Dragline from 1999 to 2001. “The day I walked into Bengalla with P&H, I was one of the Bengalla team,” said Ken.

In 2004, Ken experienced another defining moment in his career. Ken was involved in an unfortunate incident where a hi-pressure hydraulic leak resulted in fluid injection and the loss of sight in his right eye. Rather than dwell on the negative outcome of the incident, Ken used this as an opportunity to raise awareness for safety in the industry completing numerous presentations about his accident at Bengalla, as well as other sites across the valley.

“While my accident was a life changing downside, it has allowed me to do a lot of great work in the safety field and allowed me to promote safety not only in Australia, but overseas as well,” said Ken.

Throughout Ken’s career, he has influenced many of the maintenance and operational outcomes at Bengalla. “When it comes time for him to retire his toolbox, Ken will leave a legacy of mechanical ingenuity, professional work ethic and many important safety messages that will be remembered by all who have had the pleasure of working with him,” said Ben.

“He will take with him a wealth of knowledge that Bengalla will find hard to replicate when the time comes.”