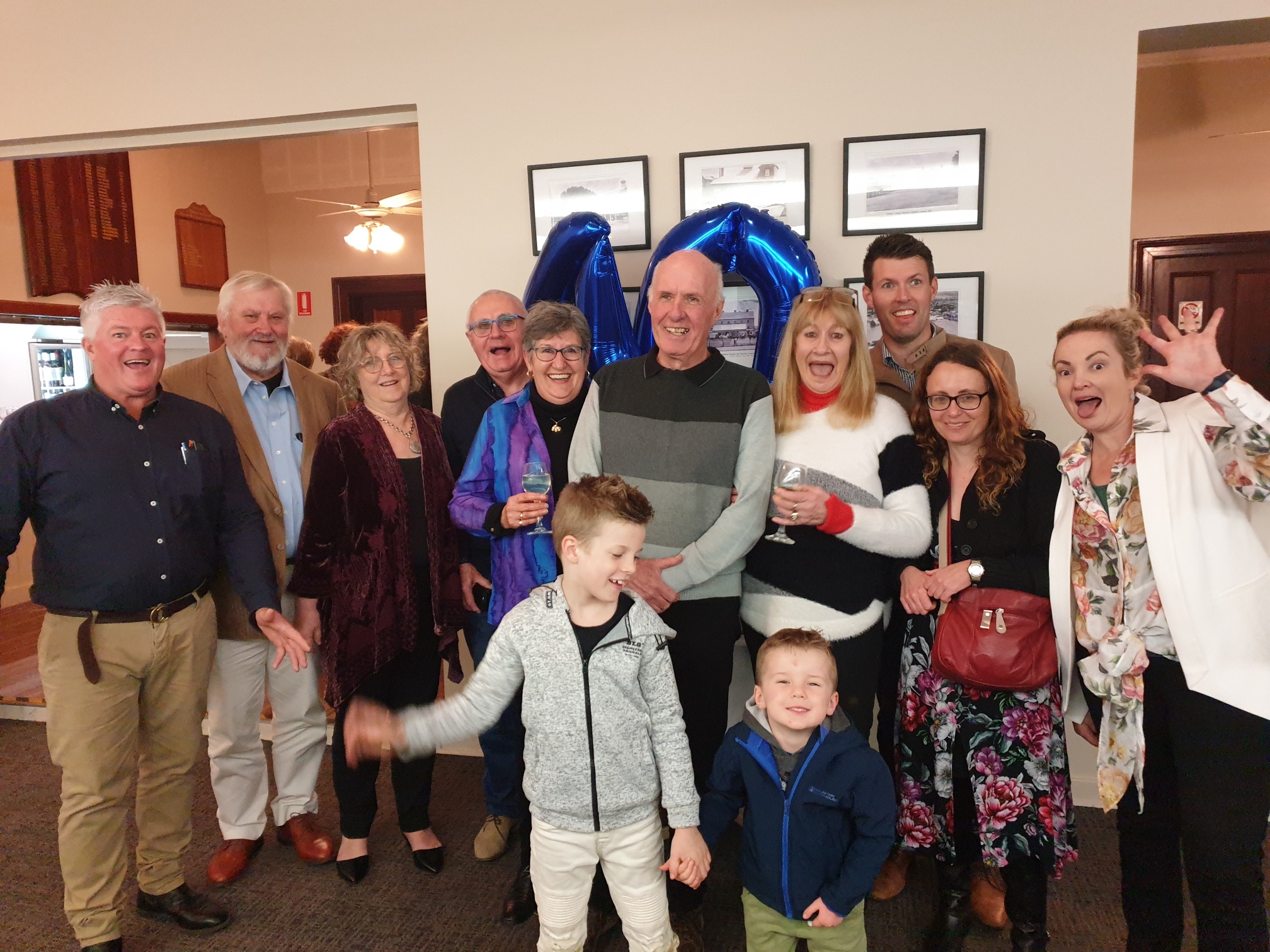 Beloved Singletonian Bernie Wood turned 40 recently. Well, his beloved business Singleton Earthmoving did and around 80 of his closest friends and business associates came to celebrate the momentous occasion.

And that’s the thing about Bernie Wood. He’s the type of man that you can’t do business with without becoming firm friends with him as well.

On the night, Bernie arrived to a resounding chorus of ‘I did it my way’. Well and truly shocked, it was a typical reaction from a man who doesn’t think he’s anything special. And that’s exactly why he is.

The truth is that Bernie Wood hasn’t just dedicated 40 years of his life to Singleton Earthmoving. Since arriving in town, he has dedicated himself to the Singleton community. The boy from Taranki NZ is now well and truly a boy from Singleton.

Taking opportunities, thinking on his feet, always acting with decency and fairness, this is the modest version of people’s opinion of the Bernie.

The Singleton Earthmoving story began the day lady Di and Prince Charles got married when he and Paul Gleeson decided to go for a meal at what was known as Ripples on July 29, 1980, and from that the company was formed. It started from humble beginnings hiring out rollers and other equipment, some of which are still lying around. They were building carparks, tennis courts and doing small earthwork projects. Camberwell Coal then stepped things up a gear.

On the night Bernie said in typical style, “I’m overwhelmed. The business has been great, but Singleton and the friends I have met are what has kept it all going.”

They say life begins at 40. Bernie and his business partner Chris ‘Bango’ Bennett now drive the business and have diversified from mining to rail and general civil.

But Bernie certainly didn’t do it all alone. He was very insistent on attributing whatever success that came along was built with those by his side.

“I’m very pleased and fortunate that local identity and farmer Chris ‘Bango’ Bennett joined forces 7 years ago. Since coming together, a new energy and more success has come our way,” Bernie told us.

It’s not something he’s that comfortable crowing about, but the sense of personal satisfaction of being able to be a part of a place that has given him so much is clearly very gratifying.

Bernie, “To be honest the way I feel is that Singleton has given this Kiwi boy more than I can ever have dreamt of.”

Those people past who Bernie credits with so much were clearly present in spirit on the night. Paul was celebrated numerous times and much-loved brother in spirit and co-worker Lloyd, was not only mentioned, but a photo took pride of place next to the special cake and decorations for the event. Cleary missed, never ever forgotten.

At the end of formalities, a rendition of ‘Country Road, Take Me Home’ was sung in chorus led by Warren, and it is fair to say that whenever you are in Bernie’s company, it really does feel like home.

To 40 years from your mates, from your town and from your industry. Awesome work, and here’s to many, many more!

Chris ‘Bango’ Bennet – “Bernie is my business partner. He’s my mate. He’s just a good bloke. He’s been just a wonderful human being to Singleton as whole. Sporting people, people out of work. He’s managed to find positions in the company for so many until they’re back on their feet or permanently. He’s the salt of the Earth.”

The Hon George Souris – “Bernie Wood is one of the great characters of Singleton. He has become a legend in his own time because of the generosity of his spirit and the way he looks after people, his employees in particular, but who also are his friends.”

Michael Kelly – “A Kiwi blow in. But one of those blow ins we are pleased we the wind was blowing our way. A great Singletonian. He has made a tremendous effort in terms of 40 years in business, but what he has put back into the town, you couldn’t measure it. I know so many people and employees who are so much better off because of Bernie. The effort he has made on behalf of Singleton Rugby Club and he’s just a genuinely good bloke – simple as that.

Warren George – “Bernie is a man I hold in high regard and will respect till the day I die. I love Bernie, he’s helped me and my family. I’m here to respect and honour Bernie today.”

Bill Sutton – “Bernie is the greatest earth worker in the Hunter Valley. He’s done a great job and he has helped so many people. He’s got a heart of gold. He’s a dead set rugby fanatic. It’s my pleasure to know him.”

Barry Cox – “Who is Bernie Wood? Bernie Wood is one of the finest gentlemen you would ever find. He has done so much for so many people.”

Richard Bailey – “Bernie Wood is bloke I found in a tailings dam about 40 years ago on a roller with a bag phone the size of a suitcase sitting behind his seat. Every time you turned around, he’d be stopping the roller and running his business over this big bag phone – till he ran out of battery. And that was Bernie Wood, the loveliest bloke you would ever meet. Seriously he really is, a lovely boy.”

Shep – “He’s my mate! Who’d you think he is? He’s such a genuine bloke, you couldn’t get a more genuine bloke than Bernie. I’ve known him since he come to Singleton. A top bloke, a top bloke.”

Lyndal – “The most generous man I have ever met. He would do anything for anybody. You just have to ask and he is there for you.”

The Hon Joel Fitzgibbon – “Four decades is a great achievement and one you can be proud. Have one for me, it’s a true achievement.”