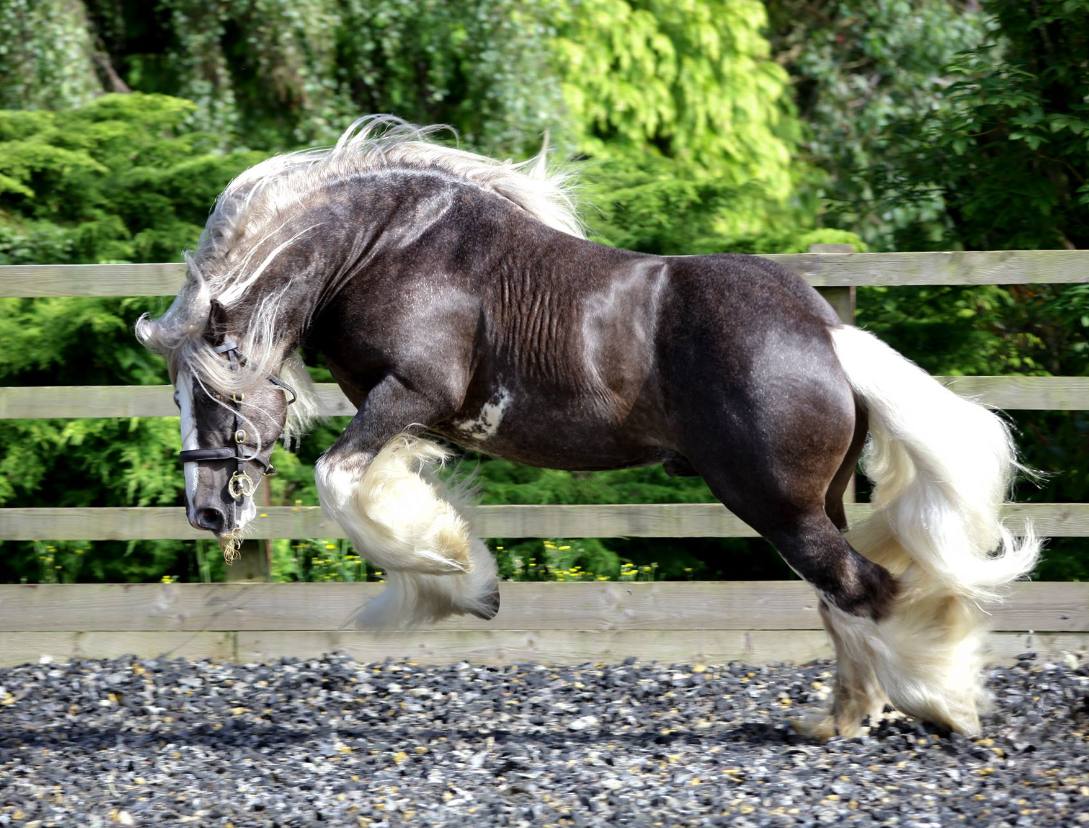 Martin Mythen might be a miner by day, but he’s a horse breeder at heart.

Marty works at Glencore’s Glendell operation as a water cart operator, having moved with his family from England in 2012 to give the warmer Aussie climate a go. Despite spending half his life in England, Marty still has a great Irish accent and it is music to the ears when he greets you with a ‘top of the morning,’ or any other Irish-ism.

Marty comes to the job with plenty of experience. In Cumbria, in England’s north, he drove tanker trucks, transporting milk and whey. But it seems he’s a country lad at heart, and it’s a different pastime that we’ve come to his Mirannie property to talk about.

The house is tucked into a small clearing at the end of a long driveway that winds its way through a small forest of gumtrees. On the left of the driveway near the house is a large enclosure full of plump chooks. On the right, guinea fowls. A huge Rottweiler with a large, boofy head comes out to greet us as well.

But in a paddock next to the house is the star of the show. His name is ‘Abs of Lindale,’ and he’s an Irish Gypsy Cob stallion.

This is Marty’s other job: He and wife Siri breed and sell Gypsy Cobs internationally. If you’ve never seen this breed of horse, you’re missing out.  They have extravagant, long manes, and the luxuriant hair on their legs, forelocks and tails is known as ‘feather’.

They’re a heavy horse, traditionally used as draught horses. They’re smaller in stature than the similarly feathered Friesian, standing just 14 to 14.5 hands on average. But their temperament is part of their charm.

They’re a heavy horse, traditionally used as draught horses. They’re smaller in stature than the similarly feathered Friesian, standing just 14 to 14.5 hands on average. But their temperament is part of their charm.

“They’re the type of horse that will go all day long,” says Marty. “They’re not built for speed; they’re built for comfort. And they’ll just plod away all day long. They’re willing little souls.”

Although the breed is less known in Australia, it’s been a part of UK life since the 1800s, when the travelling Romany people (gypsies) used them to pull their ‘vardoes,’ or gypsy caravans.

Gypsy Cobs have been bred to have very distinctive colours, with good reason. As Marty explains:

“During the First World War, when the military came along, they took all the bay and brown and black horses for the officers. The Gypsies still needed their horses to pull their living wagons. So they bred coloured horses, which the military wouldn’t touch. Because when they went into battle on coloured horses, they stood out. So from then on, they kept the tradition of breeding the Irish Gypsy Cob.”

These colours are usually piebald – black patches on a white animal – or ‘skewbald’ – white patches on a chestnut or bay animal. Having said that, they can also be solidly coloured.

‘Abs’ himself is a bit of a celebrity in the Cob world. He’s the first solid colour Gypsy Cob to be recognised as the ‘Supreme Champion of Champions’ by the UK’s Traditional Gypsy Cob Association (TGCA).

Marty is a realist, and he concedes that part of the draw of horse breeding is the potential to make money. “It’s essentially a farming practice,” he says. But animal welfare is very important to him, and he believes in using the least invasive techniques he can to keep his animals healthy and stress-free.

“I’m a very firm believer in letting nature teach nature’s ways. To me, there can be too much human input. That first six months is imprinted into them [horses]. They need to learn how to be horses, not humans! We can teach them whatever we like afterwards.”

He also acknowledges that the Australian climate can be hard on the breed, and like other farmers in the area, the drought over the past two years has affected them.

“The reality is that the only way you can earn money is by keeping the mares in foal,” he says. And although they are a “hardy” breed, nature helps them out in dry times. As Marty says, “nature itself actually shuts them down and tells them to stop producing,” which means the mares won’t come into season. “It comes down to self-preservation,” he says.

So where did his interest in horses come from?

Marty was born in England, and raised in a rural area of Cork, in Ireland. “Even before leaving school, I was into horses. When I left school, I went to work in the hunt yard, training and schooling huntsmen’s horses. That’s what I used to ride,” he says.

Marty says he enjoys helping animals with ‘behavioural problems’ that others have given up on. Though he is fond of his horses and his rural lifestyle, he has no plans to leave Glendell. “People often tell me I’ve got the best job in the Pit,” he laughs. “I’m very, very lucky.”