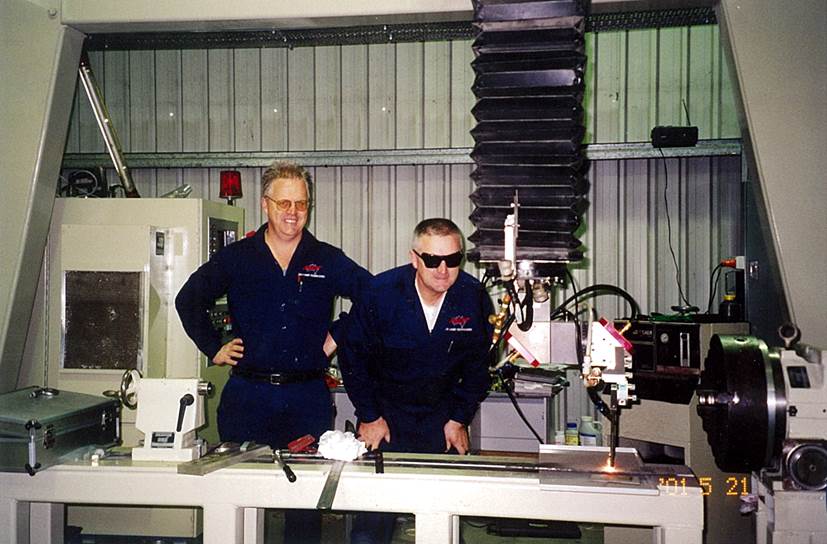 This month LaserBond celebrated thirty years in business. We sat down with CEO Wayne Hooper to find out how in three decades they went from a small family business to an ASX listed company.

LaserBond’s story is a tale of where innovation and determination can take you. It all began when Gregory Hooper foresaw the need for a services company that would embrace new metal spray deposition technology. With family support from his parents Rex and Lillian Hooper, Greg founded the company in 1992, operating out of a small workshop in Ingleburn, NSW. His brother Wayne came onboard a couple of years later and joined his family in building this small company into the success it is today.

Innovation was the name of the game from day one. In 1992 they developed and introduced brand new technology called the High Pressure High Velocity Oxy Fuel (HP HVOF) process. The HP HVOF process sprays semi-molten droplets of coating material at extremely high velocities, resulting in coated surfaces of the highest possible quality and performance to improve durability, and resistance to corrosion.

It was a game changer. LaserBond’s decision to introduce technology specifically targeting wearing component to make them last longer immediately set them up as players in the field and also began what would be a long term commitment to investment in research and the embracement of new technologies.

In the late 90’s they built their first laser cladding system, one of the first in the world. Commissioned in 2001, it was the first of several laser systems the company now has. It also brought recognition, winning a innovation award.

Wayne shared how pleased the company was to receive the accolade but was quick to point out that everything they’ve achieved would not have been possible without actively working with industry and heavily investing in research.

“We’ve always welcomed working closely with industry, government, research partners such as universities, and all the external suppliers whose products are manufactured with our technology and exported around the world.

“Research and development are at the core of what we do. We are continuously striving for improved results. We have bult our own metallographic laboratory and also invested in an in-house Scanning Electron Microscope to enable us to continue to innovate.”

In 2007, the company was ASX listed and became LaserBond. Wayne shared what an accomplishment it was coming on the back of the technology they had created and their continued growth. As the company has grown so too has their workforce with around 130 employees now part of the LaserBond family.

“One of our first apprentices is still working with us today, now he’s a manager,” said Wayne. “It is important to us to foster more skilled people, especially now when we are seeing such a skill shortage. Currently we have 16 apprentices and training development is big for us. Getting out at schools and Tafes and letting students know how rewarding and important careers in manufacturing and metal trades are.”

Wayne also shared that another point of pride for the company is the part they play in helping reduce the carbon footprint.

“By helping to keep equipment running longer and being able to make wearing components last 3 to 10 times longer means a lot less scrap being generated. We also reclaim worn parts and using superior materials make them better than new rather than ending up on the scrap heap. Environmental sustainability is factored into everything we do.”

It’s incredible what they have achieved in 30 years and we can’t wait to see what they accomplish in the next 30.