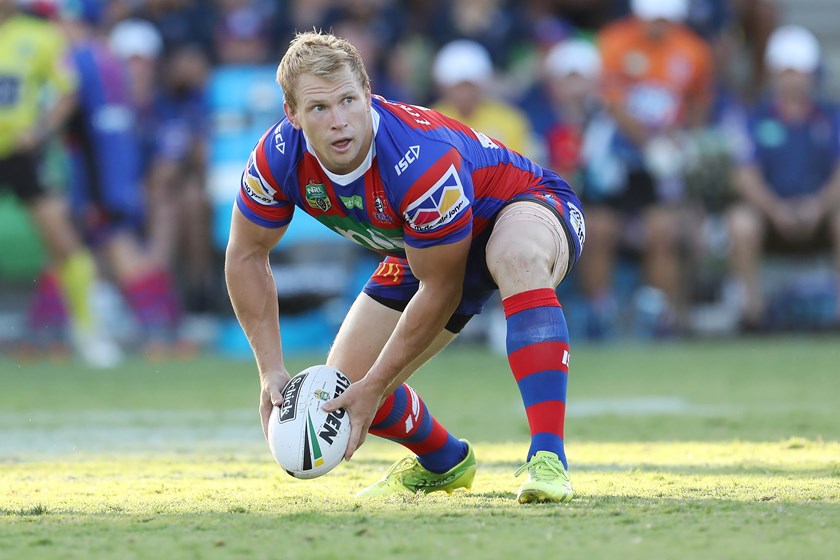 With the Newcastle Knight’s new NRL season well underway, ATCF recently
met up with new recruits, Slade Griffin and Hermen Ese’ese, to find out how
they are settling into life as a new knight of the realm for Newcastle and the
Hunter Valley.
G’day boys, thanks for taking time out to speak with us. We know that,
for some reason, not everyone in Hunter Valley mine country is a red
and blue blooded fan of the Knights, but, nonetheless, we do know
they’ll appreciate you both speaking to us. So, how are you blokes
travelling so far this season?
SG: No worries. Yeah, look, everything is going well; so far so good. All us
new players are settling in well. Newcastle is a great club to play for and the
city is just beautiful.
HE: I’m travelling well at the Knights. Like Slade said, it’s a great club to play
for, and after the first few games, I reckon the season is shaping up to be a
good one.
Good to hear. From the sidelines it’s been great to see a couple of wins
under the belt (at the time of writing). What’s the feeling like in the sheds
at the moment.
HE: It’s a good vibe in the sheds, especially after our Round 1 and 2 wins, all
the boys were on a high, and hopefully we can keep it up as the season
continues.
SG: Yeah, I’d have to agree. There’s a great feeling amongst the team at the
moment. We thought if we started the season with a high completion rate and
got stuck in the grind with other teams that we might be able to come out on
top. There’s a lot of excitement around here, especially with the likes of key
players coming in and helping build our combinations. We just need to keep
turning up to each game and putting in the maximum effort, I think that’s all
the town asks.”
Big time. That’s all anyone asks, we reckon. Show up, put in the effort
and get the rewards. So, what do you reckon, do you think the Knight’s
have a shot at making the top eight this season?
SG: Yeah, I do, ever since we signed Mitch Pearce, I was actually thinking
we’d be really disappointed if we didn’t make the top eight. I think all the boys
have taken on that expectation. We know there’s a lot of hard work to do
between now and then, but there’s definitely a feeling of excitement of being a
top eight team this year.

HE: I agree, I think we’ve got a big chance of cementing our spot in the top
eight, especially with the roster we have. But, we can’t get too far ahead of
ourselves. We’ll need to take it game by game.
To keep that motivation and momentum going, can we suggest digging
out a copy of the ’97 Grand Final and having a watch of that. The last 90
seconds are brilliant.
HE: I haven’t watched the 97’ grand final in full, yet, but I will one of these
days. Obviously, the Club has had a lot of success back in the day so
hopefully we can move forward and be successful again, soon.
SG: Ha! Yeah, the Old Boys are always in the sheds talking about the grand
final wins back then, showing us clips and so on. I’ve watched highlights of
that game a few times and heard a lot of stories. It’s a big part of the club’s
history and I think it speaks a lot for the good culture we have at the club.
Well, good on your boys. Slade, Herman, thanks heaps for sitting down
with ATCF. All the best for a top eight spot, and maybe even a shot at
the Grand Final. See you at the Voice for Mining Day, later in the season.
HE: No worries, cheers.
SG: Thanks. And thanks to all our supporters in the mining industry. We can’t
wait to play for you all at the Voice for Mining day. Cheers.