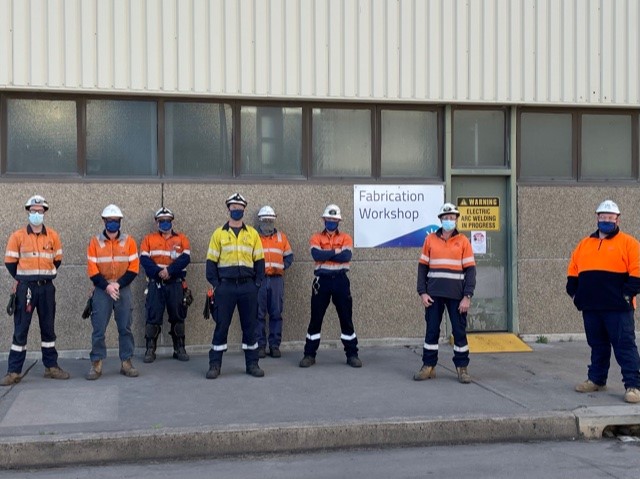 Fabrication Workshop raising money in August for Bears of Hope

AGL’s Maintenance teams at Liddell and Bayswater have set themselves a challenge to raise $20,000 for charities this financial year. With the first month already raising a whopping $5,000 they are set to blow that target out of the water.

Every year the workforce of AGL’s Bayswater and Liddell run fundraising drives to support a charitable organisation. This year they have set themselves an ambitious target to run an event every single month and in doing so attempt to raise more money and help more people than ever before.

As part of their social licence and values, AGL runs a great program where for every fundraising initiative held by their employees, they will match the money raised up to a total of $1000.

AGL’s Bayswater Maintenance Manager Jerry Murray said that this year they planned to take full advantage of this initiative by setting the impressive target of running a fundraising event every month.

“By running 12 charity drives throughout the year it gives us the opportunity to raise an additional $12,000 through matched donations by our company. Whilst it means a much bigger commitment from the workforce, being able to maximise the company’s financial commitment was too good an opportunity to waste,” said Jerry.

Jerry explained how this new goal would also enable them to raise money for 12 different charitable organisations rather than just a few.

“Each month a different area or workshop will take on the responsibility of that’s month’s fundraising and choosing a charity. Each charity is chosen because of a personal reason such as someone who has been impacted. It’s not only about raising funds, but also raising awareness.”

For the month of July, the Maintenance Mangers and Superintendents chose Dementia Australia and raised over $5000. For August, the selected charity is Bears of Hope and they have already raised over $3000. Both charities hold significant meaning for members of the workforce.

Jerry said that the idea behind these drives is to not only support and engage with the wider community, but to also strengthen the bonds within the workforce. He added that giving is needed now more than ever as charities are severely impacted by COVID-19.

“Charity drives are about raising awareness and uniting us in a common cause. Each month we schedule all different types of fundraising events such as BBQ’s and raffles, each proudly headed up by a different area of the workforce.

“Everyone is going above and beyond. We have people donating amazing prizes and people happily spending large amounts of their time organising. What we are seeing is that it is bringing people together.”

Another fantastic initiative of AGL’s that strengthens the ties in their workforce and in the wider community is their volunteer days. Every single member of their workforce is encouraged to donate one day of their time volunteering in the community with AGL covering it as a paid workday. Jerry said they are aiming to hit 100% of workforce involvement this year.

“Last year one of the events we volunteered at was the Walk Against Violence in Cessnock. In previous years we’ve volunteered at Aussie Ark, OZ Harvest and participated in Clean Up Australia Day. We are excited to see where we can lend a helping hand this year.”