In exciting news for our local footy fanatics, @ The Coalface has struck a sponsorship deal with the Bengalla Group 21 Competition for the 2019-2020 seasons.

@ The Coalface is proud to be a part of the local Rugby League scene, and this year will see a permanent fixture of the competition in our magazine, along with updates from the clubs via our website.

As part of the agreement, the clubs have the opportunity to have one game a weekend commentated via our online link, making it easier for shift workers and those out of the area to be able to listen to all the action live. It’s a first in best dressed, with the club that books the game also having that first-grade game videoed with commentary.

Along with the commentary, there will also be a weekly YouTube video featuring the commentary team and guests from each club. One thing is for sure, the dynamics of Group 21 is increasing in exposure, which is great for all involved. 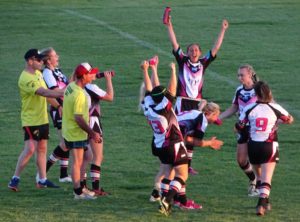 It isn’t that long until kick off to the season, with the Scanlon Shield just around the corner.

Off the field however, this off season has seen a lot of player movement. Singleton’s signing and early announcement of Frank Paul Nuusausala has added hype to the Greyhounds and their numbers at preseason training.

Denman’s strategic signing of Adam Grech as Captain Coach has seen a number of players transition with him to the Devils for 2019. The Devils have been out of the finals for the past few years, though the very smart signing of Grech and recruitment of players might be enough to see them finish in the top 4.

Scone were last year’s premiership winners and have done well with their retention from last year’s side and have had large numbers at training. 2019 sees the return of Topliss, Austin, Hawkshaw, Curry, Adams and club favourite John Johnson. The Thoroughbreds are in good shape looking at the year ahead.

Aberdeen’s Ben Baker set the competition alight last year and has stepped into the Captain Coach position for 2019. The departure of one the Tigers top blokes and quality player, Josh Schmiedl, will leave a void for Baker, though the return of Trent Walker to the gold and black will add strike power to the attack.

Muswellbrook have signed North Coast representative halfback Mick Henry, who played a few games in 2018 before injury saw him sidelined for the remainder of the year. Ramone Jackson who had a big 2018 will lead the forward pack, with a number of youngsters coming through the ranks stepping up this year.

Greta-Branxton Colts have signed former player Steve Nevin as Coach for the First-Grade side. Last season was not one of their best seasons from a results point of view, though it was a gutsy effort by all players. 2019 they will have to be out of the barriers early.

Merriwa Reserve Grade are under pressure to perform, with the Ladies side taking out the CRL 9’s and raising the bar. The Magpies always seem to pull together a competitive side and 2019 may see them finish back in the semis.

Murrurundi Mavericks, the team from the foot of the Rangers, we are hearing big things are happening behind the scenes with Captain Coach Corey “Squirt” Holman retaining last year’s players and recruiting well in the off season. The Mavericks are definitely going to be one too watch this season.

Stay posted to our Facebook and Website for more information. The Footy Fever boys will be keeping you up to date with the happenings through the week, and commentary will be streamed straight to you in 2019 thanks to the Coalface and Bengalla Group 21.