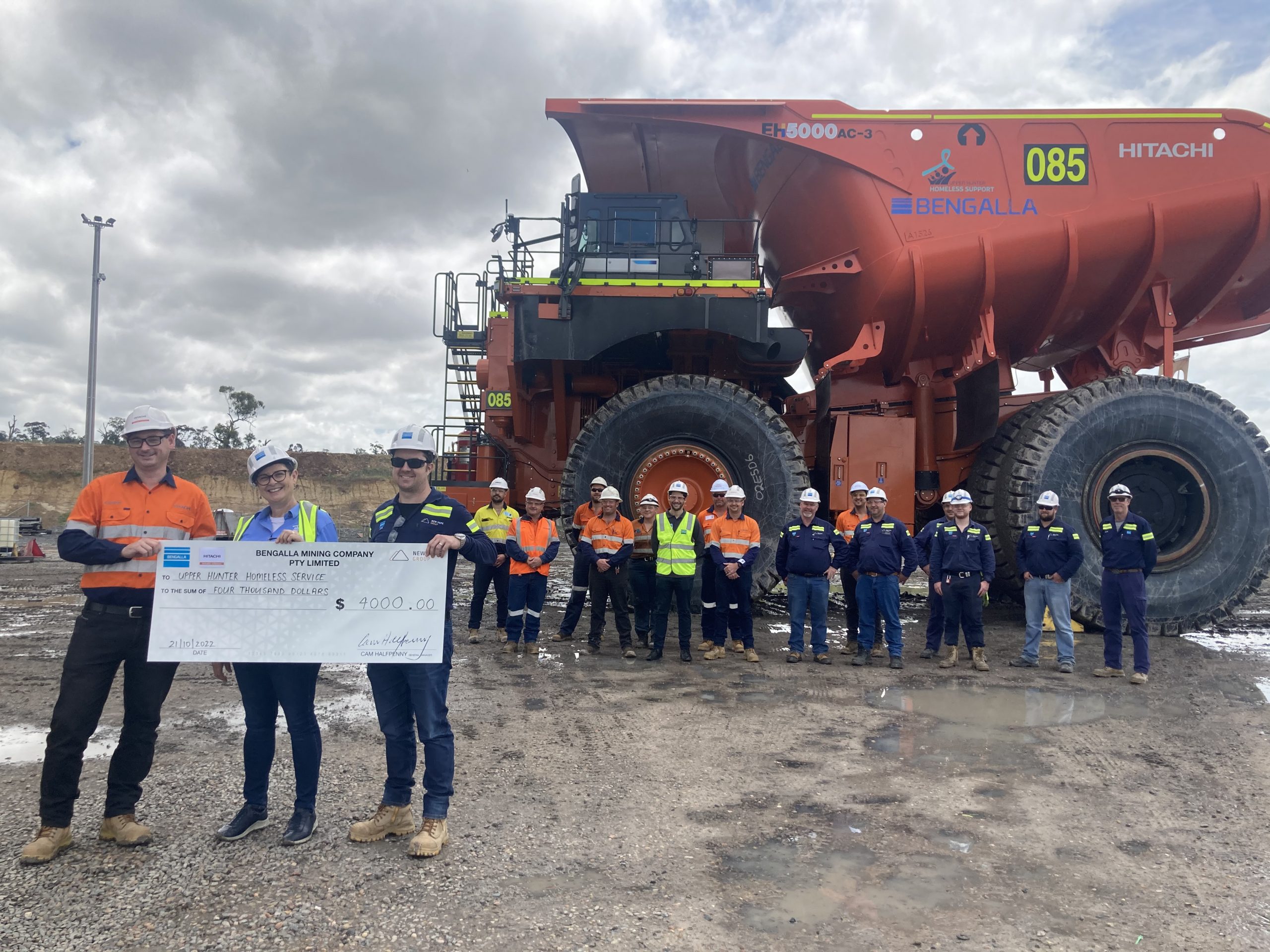 Bengalla and Hitachi have partnered with Upper Hunter Homeless Support (UHHS) to raise awareness of the important work UHHS do in the local community, proudly emblazoning their Hitachi EH5000 Truck 85 tray with the UHHS logo.

To celebrate the important partnership, Bengalla hosted a BBQ onsite where Truck 85 with the newly decaled UHHS tray was front and centre. In addition, a $4000 donation from Bengalla and Hitachi was presented to a very grateful Mary Spora, General Manager at UHHS.

During July and August, Bengalla put the call out to their workforce to collect essential items to help those in less fortunate circumstances

“We put a call out to our workforce to donate new or very good condition second hand items such as blankets, jackets, towels, boots and sleeping bags and were overwhelmed with the response,” Ben said.

“The thing that astonished me the most is we delivered three large carloads of donations and when we came back the second time with another two loads a month later, all the items from the first donation had been handed out,” he said.

“I think there might have only been one pair of boots left which goes to show how much these donations were needed and valued.”

Upper Hunter Homeless Support General Manager Mary Spora took the opportunity to personally thank Bengalla on site and to speak about the service. One of the main messages she hopes to get across is that their service is not only for the homeless, but a big part of the work they do is to provide tools and resources for people who may be at risk of becoming homeless.

“I want to thank Bengalla for everything you do for our organisation, something like this just keeps our name out in the community,” Mary said.

“Homeless happens everywhere, you would be surprised who gets themselves in trouble. While we work with people living on the streets and this is really important work for us, we also work with people who are in trouble with their tenancy or their housing.

“The best thing people can do if they are in this situation is to come to us early, people who have received an eviction notice or admit they are behind in their rent have a much better chance of staying in their home then when they come to us saying that a sheriff is coming in three days’ time.”

Bengalla donated $2000 to the organisation and Hitachi, the supplier of the mine’s EH5000 trucks, matched the donation with Aaron Chenery saying it was a local cause Hitachi was more than happy to support.