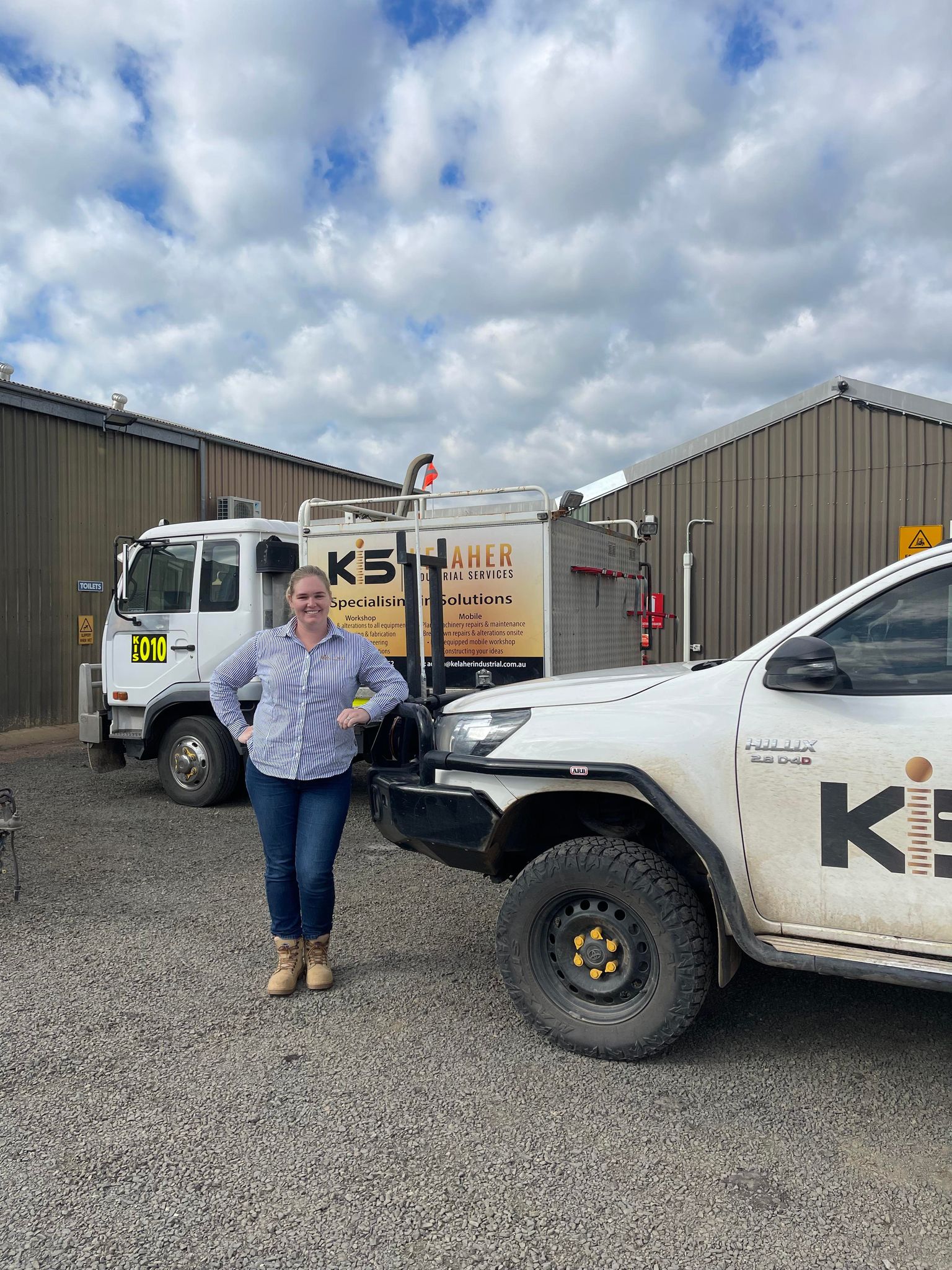 Kayla Kelaher is the founder and managing director of Kelaher Industrial Services. Not only has she created a successful business in a male dominated industry, but she also uses it to help promote other women into the industry.

At 32 years of age – yes 32 you heard me right! Kayla’s story is an amazing example of what you can achieve with determination and hard work. While it’s not so unusual for someone of her age to be running a successful business, being a woman running a successful business in a male dominated industry is rare, even in this day and age. While Kayla probably doesn’t consider herself as a role model for women, her representation is paving the way for more women to follow in her footsteps.

Born and raised in Wee Waa, Kayla’s early career saw her working in the mining industry alongside her husband, Mitch Kelaher. Fly in fly out (FIFO) work for mining companies saw them travelling across the country, Mitch working as an electrician and Kayla in administrative and finance roles. Although it was only a decade ago, Kayla shared how uncommon it was to come across other women on site.

“Mine sites could be a daunting environment for a woman, especially on the FIFO projects. You would walk onto a site and not see another female for miles. When you did come across one it was normally in an administrative role. Very rarely did you see them in operation roles.”

In 2015, the pair moved back to Gunnedah and Mitch launched his own business, Kelaher Instrumentation and Electrical (KIE), supplying contract electricians to mines across the region. Kayla worked alongside Mitch in the business, but once it began to thrive she decided it was time to seek out a new challenge of her own. Seeing a lack of mechanical services in the region Kayla was determined to fill the gap and so she made the bold decision to go out on her own and start Kelaher Industrial Services (KIS).

“Having been involved in the mining industry for so many years I was confident I had the experience,” said Kayla. “I don’t have a trade qualification, but I understand all aspects of running a business. Although the mechanical trade is one of the highest areas still dominated by males in the industry, I didn’t let that stop me. Besides, I thought it was high time to change that.”

Since starting the business, Kayla has been actively increasing the positions for women in mechanical trades and trying to help them get a foot in the door.

“It’s about having pathways that enable equal opportunity. What we are trying to do is provide positions that will allow more women to get into the industry. We now have 7 females working for the business across different roles including operators and we even have a boilermaker.

“We employ women wherever we can, however there’s still not enough women coming forward. We are always looking for new ways to actively involve women such as through our apprenticeships.

“Back when I started, especially in FIFO over a decade ago, you might see another female face in the administration building but not working as an operator or a tradie. Now we know that women can do these roles and do them well. It’s proven that women change the environment and culture of a workplace for the better.

“There’s been a real shift in the way of thinking over the last decade but there’s still a way to go. Though I do believe change is happening more quickly. It’s a wave that builds and builds, gathering up more women as it goes and I’m happy I can play a small part in that.”

For young women out there, Kayla shared some advice that helped her get to where she is now. “Have confidence in your ability and don’t second guess yourself. Give everything a go. Anything is possible if you are committed.”