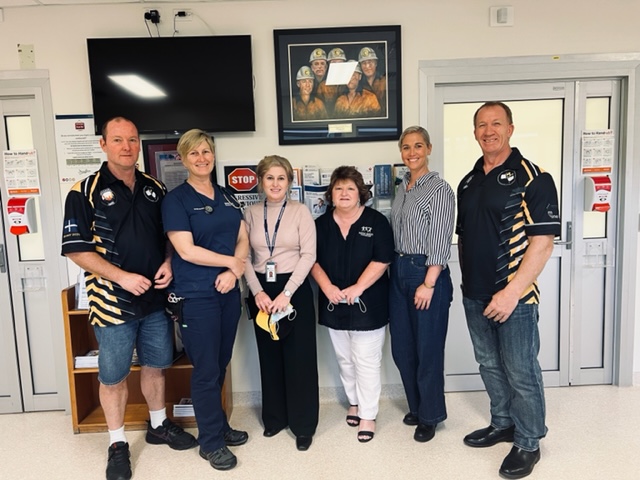 Five MEU Lodges have committed to providing long-term support to Moranbah Hospital by setting up a fund, which will help improve living conditions for nurses working in the central Queensland mining hub.

The fund will go towards the daily operations of the Hospital, as well as some funds to be dedicated to upgrading the nurses’ accommodation.

MEU members long campaigned for improved health services in mining regions like Moranbah. The Union advocated strongly for funds for a new hospital for Moranbah, which was finally announced in the last state budget.

The new fund continues this great legacy by MEU members. It has been created as an acknowledgement of the Moranbah Hospital’s role in the May 2022 explosion at Grosvenor.

After the five men were severely burnt in the explosion, they were rushed to Moranbah Hospital before they would be airlifted to Brisbane for further care. It was at Moranbah Hospital that the men received life saving care, and through the efforts of the staff were able to resume breathing after the explosion.

“If we didn’t have the care of the nurses and staff at Moranbah Hospital, we would have five fatalities on our hands. They simply would not be here today.” Grosvenor Lodge Secretary, Scott Jensen said.

Members at Grosvenor Lodge made a donation to Moranbah Hospital to acknowledge the critical work of staff there and have now joined other QLD Lodges to create a new joint fund.

“We are fly in and fly out workers which means that we spend 50% of our life in Moranbah. If something happens, the Moranbah Hospital is the first port of call.” Grosvenor President, Steven Hall commented.

“We’ve also had conversations with the nurses who work there. The nurses are also fly in and fly out workers like us, and the state of the accommodation is enough for some nurses to go running which is why we’ve created this fund.”

The five Lodges had their first joint meeting last month to discuss their plans to provide ongoing support for Moranbah Hospital.