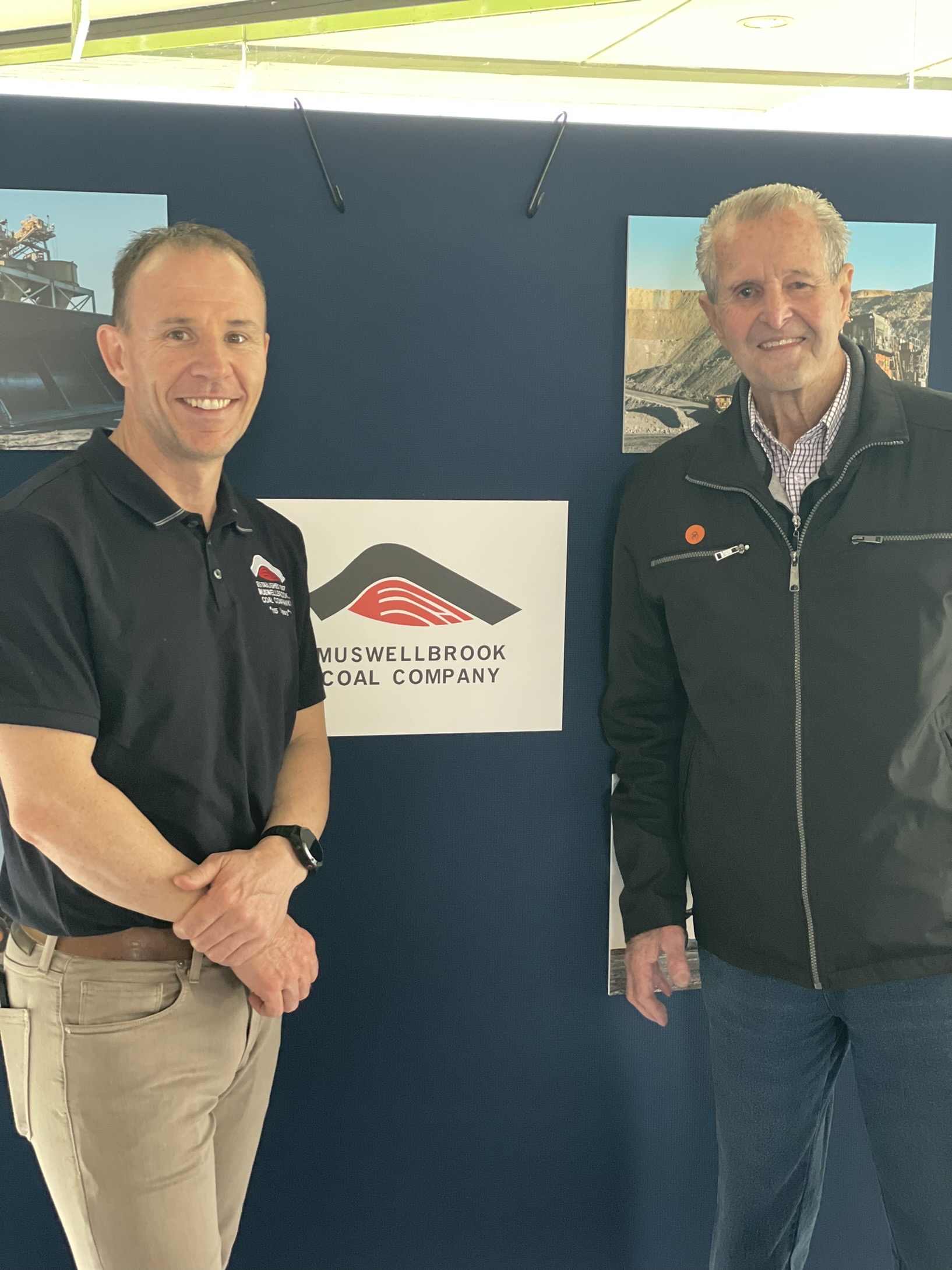 MCC General Manager Grant Clouten with Col Gardener – operator of the first truck that brought the first load of coal out of the newly opened open cut mine in 1944.

After 115 years of mine life which has involved both underground and open cut mining, the excavators and haul trucks are about to stop digging coal out of the ground at Muswellbrook Coal.

The first sod was turned on Muswellbrook Coal Company (MCC) on 1st November 1908 by Henry John Jeans. Now Henry was no coal miner and he was no businessman, but he had been watching water boring activities at the Muswellbrook Common and his keen eye noticed that two coal seams had been intersected during the drilling.

He consulted a friend to confirm what he saw and then rode his horse all the way to the Clerk of Petty Sessions office in Scone to apply for a mining lease. Little did Henry know, but two hours later another would-be coal miner rode into Scone with the same intention once word had spread about the coal at the Common.

Henry was there first and he was granted the Mining Lease on 11th July 1907. And so began 115 years of mining.

Grant Clouten has been the General Manager at MCC for the past 7 years. He’s incredibly passionate about the mine’s history and the huge impact it has had on the Upper Hunter from the very first day coal was hauled out of the underground.

In 1911 the population in Muswellbrook was 1,895 and that number doubled, then tripled in the first couple of years of mining as more people saw the opportunities for work in the town.

MCC wasn’t just any old coal mine, the very first power station was built at MCC in 1917-18.

“One of the really great stories about Muswellbrook Coal is that it was the first place to build a small power station, now I don’t know if I’d call it a power station, but it was certainly a big generator,” laughed Grant.

MCC originally built the power station to help with their own mining operations, but the local Council quickly saw how it could benefit the whole town.

“Council approached Muswellbrook Coal and said would you be willing to share that electricity with the township and there was an agreement struck between the two parties that allowed the excess electricity being produced by this power station to light up the town – this saw the beginning of commercial electricity generation by the Muswellbrook Electric Power Station Company.”

Muswellbrook was the first town outside of Newcastle to have street lights and by the end of the 1930s the towns nearby did as well. The power station at MCC continued to generate electricity until 1975.

Like many coal mining companies over the years, Muswellbrook Coal has seen its fair share of industrial activity. Another interesting story was how quickly the first miner’s strike occurred at MCC after the site union lodge was formed back in 1916.

The miners met with the national mining union on the 5th July 1916 and the very next day made the decision to sign up and become a unionised work force. By July 22 the Muswellbrook Colliery was on its first strike, and for most of that year, there was a general strike that persisted at the site as miners fought for better pay and conditions.

Another interesting point of history for the MCC workforce came in 1949 after WWII when the coal at MCC was in high demand. The workforce was refusing to work and with such demand for the coal, the government needed to intervene to keep the mine operations happening.

“It got to the point that the government actually sent in troops to mine the coal from Muswellbrook Coal for about two months,” said Grant.

“The striking miners wouldn’t go back to work and they couldn’t come to an agreement with the Company at that time so the government said ‘well okay we’ll send troops in and they’ll mine the coal.’ The troops were able to mine the coal just as productively as the striking coal miners setting small production records during their time – which ultimately convinced the striking miners to head back to work and get on with the job.”

It has been milestones such as this that have enriched the history at MCC and saw the business continue to grow and thrive as the years progressed.

The mine continued to be well ahead of its time when in 1944 MCC became the first open-cut coal mine in the Southern Hemisphere.

The work was initially carried out on a contract basis by Thiess Bros. of Brisbane until 1957. Thiess is still one of the biggest contractors in the Hunter Valley across the mining industry.

In 1954 MCC expanded their business once again creating the Muswellbrook Brick and Tile Company, which at its peak produced 20,000 bricks a day. Whilst not a core mining business, the Company saw a need to expand the business and fill a void within the Upper Hunter community as building products had to come from Maitland or Tamworth.

The No.1 Underground mine shut down in 1982 after 74 years of operation. The shutdown was forced in the end after the pit partly collapsed on itself because the underground pillars that sat directly below the ‘pit top’ area were not stable enough to hold the ground up and a large portion of the surface structures that sat above the No. 1 entrance collapsed into the access tunnels. Whilst for many companies this would surely mean an end to operations, for MCC the business was still determined to move ahead which saw the opening of the No.2 Underground and continuation of the open cut operations in the years ahead.

In 1989 Japanese energy company Idemitsu bought MCC and is still the proud owner to this day.

“Idemitsu has ridden the peaks and troughs, but they’ve always stayed here. Idemitsu is a proud community citizen and has always accepted that operating in the mining industry is a rollercoaster ride and has both good and bad times,” said Grant.

Up until recently MCC employed around 165 people, however this is starting to reduce as the mine edges closer to finishing in approximately two months’ time, having fully exhausted all of its coal reserves.

“The people here are awesome, the production and maintenance workforces are great people whether they be MCC employees or contractors – my staff are just great, I love them to bits,” said Grant.

Once mining finishes at MCC all of the employees will progress to whatever their next challenge or journey may be, and Idemitsu has ensured everyone has the skills they need to either move on to another job in the industry or go on and do something completely different.

MCC ran their employees through training courses including resume writing and resilience skills as well as making sure everyone who wanted to continue in the mining industry gained extra skills where possible. MCC also financially supported those workers who required specialist training that was not mining related, recognising that not everyone wanted to be part of the industry moving forward as they chose their future path outside of mining.

So what’s next for MCC?

The mine will enter a phase of planned rehabilitation at some point in the future and then just like MCC turned Muswellbrook into a coal mining town, the mine is currently assessing projects that could see the MCC post mining land use to be one of the first to transform into Muswellbrook Clean Industries Precinct with future potential.

In 2021 it was announced the preliminary feasibility studies were nearing completion and environmental approvals would be undertaken for the Muswellbrook Pumped Hydro Project. The project will provide 250 megawatts of power per hour over an 8 hour period and is hoped to be completed by 2029. There are also plans for a solar project at the site.

Whatever happens next, Muswellbrook Coal Company will forever hold a place in the history books.