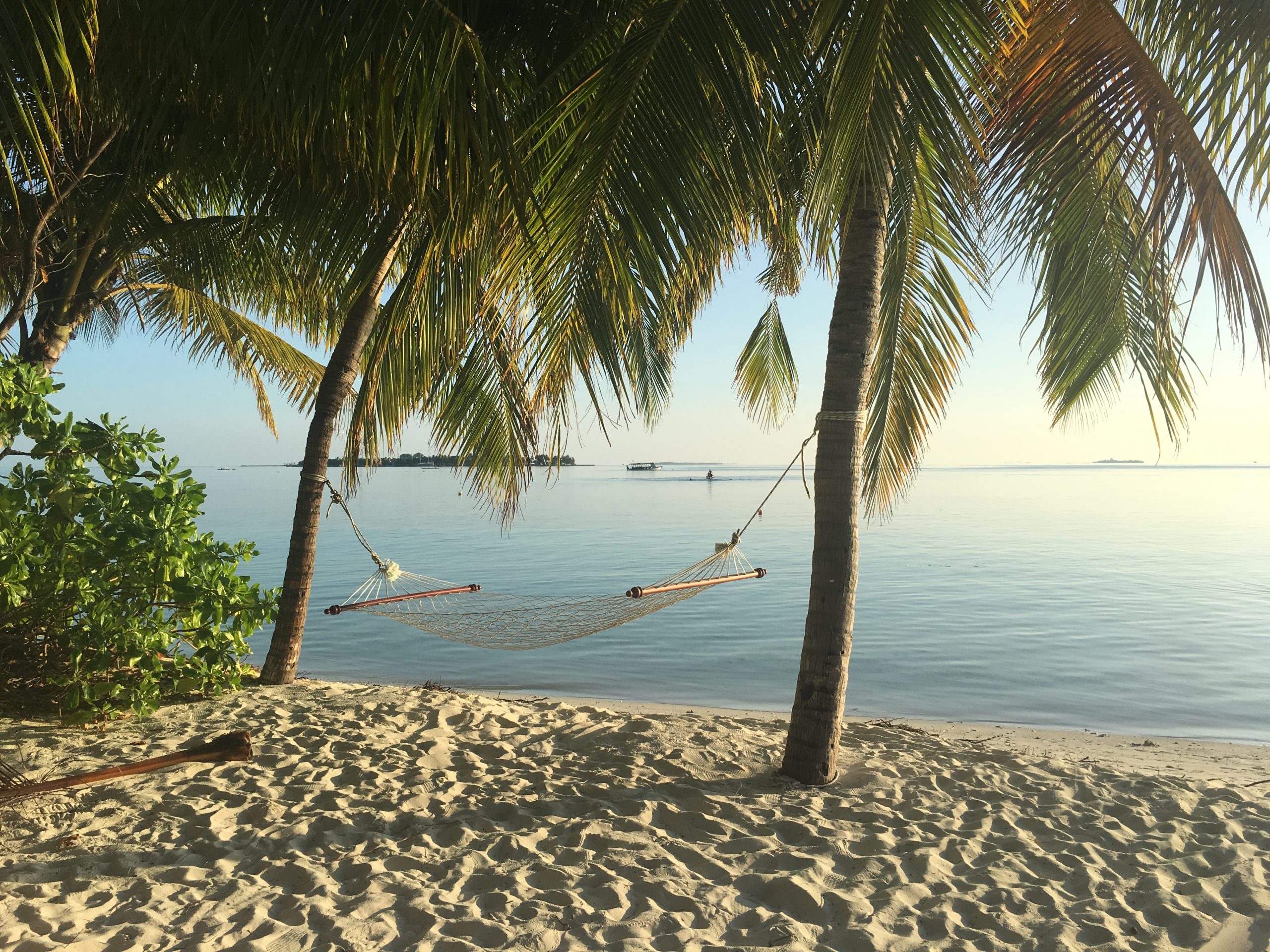 I’m standing shin deep in the clearest water I have ever seen, looking down to watch 50cm long reef sharks swimming past my feet whilst they hunt schools of small fish. Looking up, I’m almost blinded by impossibly white sand and azure skies, and I’m feeling pretty happy about life.

As it was a special anniversary, we’d decided to treat ourselves with an all-inclusive holiday to beautiful Vilamendhoo Island in the Maldives, and from the minute we took the connecting seaplane from Male Airport to Vilamendhoo we knew we’d made the right decision. Looking out the window we passed one beautiful island after another, a mixture of unbelievable colours, with more variations of blue, green, and white than I thought existed.

Landing at our island, we could barely contain our glee as we were ushered through a sandy forest path to our bungalow by the beach. After changing, we immediately walked out our front door to some of the best snorkelling we have ever experienced, with a dropoff teeming with fish just 20m from the edge of the beach, where we could drift along in the gentle current whilst gawking at the amazing range of sea life and colour.

A regular routine of snorkelling and sunbaking in paradise required us to test the limits of our all-inclusive package as much as possible.

In such a strict Islamic country where every suitcase is scanned to ensure that visitors aren’t bringing illicit alcohol into the country, the resorts offer a curious juxtaposition with their exemptions for alcohol when it is banned in the rest of the country, but I think I did my best to get the average for the whole nation up.

One of the days, we took a trip to the neighbouring island of Dhangethi, a small village of around 700 people. It was fascinating to see how the locals live in these amazing atolls in the middle of nowhere, and to learn about their history based on thousands of years of settlement and invasion from multiple seafaring nations. Although the vast majority of tourists stay in the larger resorts, islands such as Dhangethi also attract people looking for both a more authentic and (much) cheaper option for visiting the country.

For our last night at Vilamendhoo, we were given the option of switching to the Gomafulhu sailing boat, which was a 24-hour trip around part of the atoll, and it was such a great opportunity to see more of the country that we couldn’t say no.

Sunbaking on the deck, we sailed past island after island, some with luxury resorts, some with lively villages, and some with just jungle and perfect beaches, and were occasionally joined by pods of dolphins to add to the magic of the cruise.

That night we were treated to a delicious BBQ on a deserted beach, before sitting up late under the full moon, playing cards and drinking local rum with the crew, which necessitated a hangover-clearing jump off the deck into the clear ocean the next morning.

As we sailed back to Vilamendhoo for our scenic seaplane flight back to Male Airport and home, we were already dreaming of when we could return to this magical place.