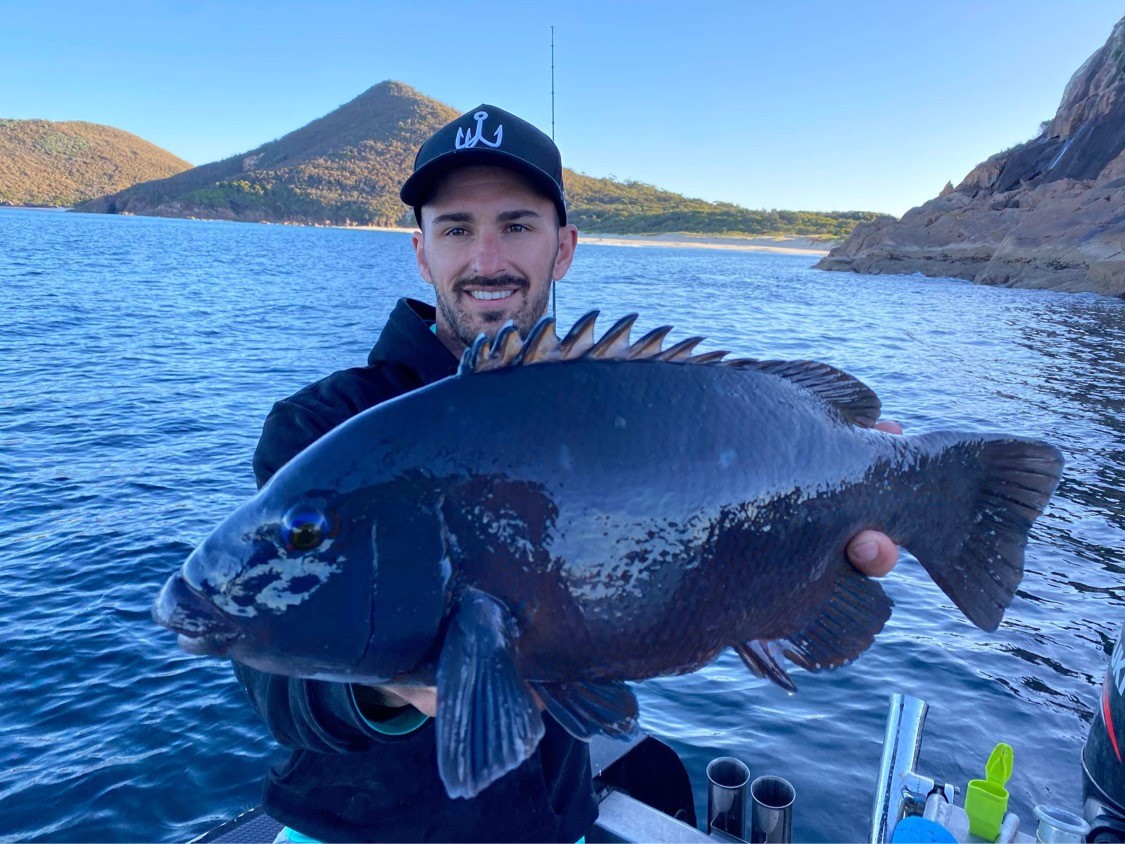 Drummer are the target but it doesn’t take long to rack up a mixed bag especially with Grouper always being keen to jump on and test out the skills. Chris got lucky with this one!

Well, we are definitely in the thick of Winter, and it’s the bread and butter fishing time of year.

Bream and Blackfish are on their annual run and can be found everywhere from estuary openings to the rocks and beaches. Plus, we have species such as Salmon and Tailor filling the gaps as well.

With the recent windy conditions, we have been putting a bit of time into chasing Drummer around the washes both from the rocks and boat. This type of fishing takes us back to where it all began, and to be honest chasing pigs would still have to be one of the best things to do with a fishing rod in hand. They play hard, eat extremely well, and live anywhere a bit of rock and whitewater presents.

For those wanting to head offshore for a fish, we are seeing good numbers of Snapper on the inshore reefs with a few Trag on the deeper reefs as well.

Out wide, unfortunately we haven’t really seen the water or weather conditions align to head out hunting Tuna off the Hunter/Port Stephen’s coast. However, a few Tuna have been caught off Sydney and further south so it can’t be long until numbers build locally.

Kingfish have been plentiful for those timing a weather window and there’s plenty of Bar Cod also in the mix while fishing live baits on the bottom along the shelf.

All the usual spots are producing quality fish – Allmark, Texas and the Perch grounds.

Honestly, exploring the local headlands and bays at this time of year provides a great excuse to exercise and target a few fish all in one hit! It can all be done from the boat, though that does take a bit of fun out of it.

What to expect? Well pretty much anything from Snapper to Bream with Drummer, Blackfish and Grouper from the wash at your feet. A little wider we will have Tailor and Salmon for those wanting to slow roll some pillies or have a spin with a few lures.

Although they have been a bit slow so far this Winter – probably due to the lack of westerlies over Easter and all the fresh due to the rain – but the Green Eye Squid should be on the menu this month.

Sadly, we have seen the results of the sudden cold change and windy weather causing the water to roll and triggering a fish kill around the two major Hunter impoundments. But don’t write a session off out at one of the impoundments as the fish still exist and will settle to into the change of conditions.

Now is the time to throw a few soft plastics, metal blades, suspending divers or even ice jigs around the schooling fish. They tend to be found along deeper edges and are a little lethargic, so it does pay to slow things right down to produce a reaction.