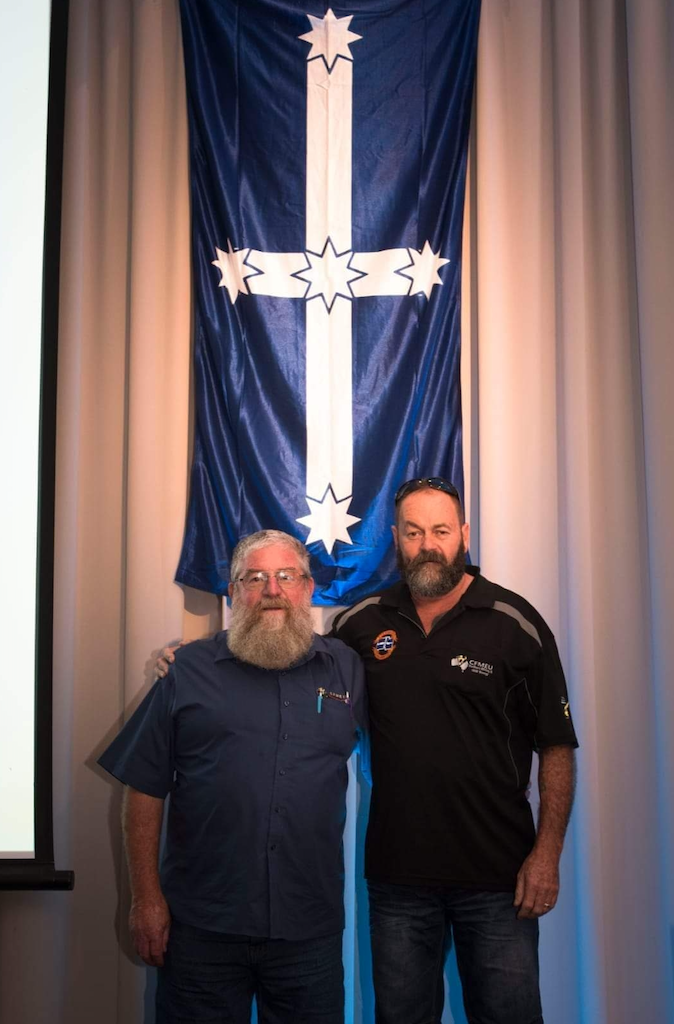 A true legend and one of @ The Coalface’s best mates, staunch CFMEU leader and Lodge President Scott Brittliffe has retired.

From the moment I met Scott he was, and remains, the most passionate miner I have ever met. While I have been around this industry for 10 years now, let’s be clear, I am not a miner, I am just a passionate advocate for the industry, and more importantly, the people that make up our industry. Everything I know is what I have been lucky to learn from the people who actually do it for a living. For me, there has been no one more important in increasing my knowledge of our industry than Scotty.

Scott is the real deal and sitting down with him to reflect recently was as moving as it was interesting. This is a man who literally has seen it all. The good, the bad, and the terrifying. His recollections made the hair on my arms stand up more than once. He may have retired from open cut mining, but this legend of the industry will always be an underground miner from the days the newer people venturing deep could never understand.

He has seen mates die, he has narrowly avoided the same fate many times, and has the kind of mining intuition only a true miner at the coalface can possess. The sounds, the signs, and the knowledge he has have not only saved his own life more than once, but those of his treasured work mates past and present. He has buried them, had beers with them and fought for them throughout the years. He’ll remember those mates until his own day comes, which he’ll no doubt meet with pride, passion and a lot of joy.

It’s no wonder he became Lodge President. The Common Cause said it well in their recent acknowledgement of the contribution Scott has made:

Scott is retiring from a long career in the Northern District coal industry and his role as President of the United Wambo Lodge.

Scott started out at Liddell Underground Mine in the 1980s aged 21 – he was doing some construction work at the mine and his Dad helped get him a start underground. Born and bred in Singleton, Scott’s father and brothers worked as coal miners too.

When the reserves ran out, he moved across to Liddell State Mine and later began his open cut mining career, which finally took him to Wambo with a rotation of employers along the way as mines changed hands.

Scott was always active in the union and was a long-term delegate before taking on the role of Lodge President about 10 years ago. He says the safety and conditions have improved significantly since he started – but only because of workers standing together through the Union and taking on the companies.

“We stuck together and fought for things and we got them. Nothing was ever just given to us, not at all,” he says.

Along with the hard but satisfying work of representing members day to day, Scott has enjoyed being involved in the union’s charity work – like the time in 2001 when 17 underground miners shaved their heads to fight children’s cancer; and supporting coal miners across the District in their industrial battles like supporting the 2019 picket line at Boggabri mine: “They thought they were on their own out the back of nowhere but we’re all in it together, it was important to show our support and help them keep morale up.”

Scott has been a committed mentor for a new generation of unionists at United Wambo and across the District and although we’ll miss him, we know he’ll keep fighting the good fight for mineworkers and his community.

We wholeheartedly agree, while he may be retiring, Scott is a man who will never stop fighting for what he believes in and he passionately believes in our industry and the people who work in it.

But I’m sorry to say mate, I’ll never let you retire from your job as one of our chief advisors. You are an invaluable part of who we are in many ways. Great luck for the future mate…The beers are definitely on us.