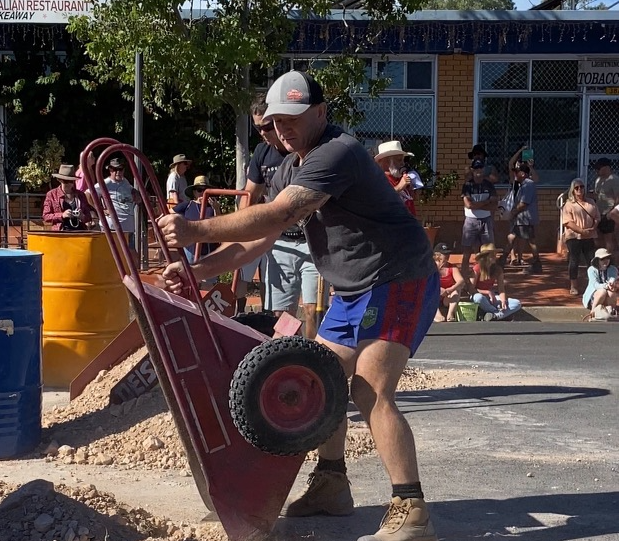 Over the Easter long weekend Mark King of Bellbird travelled to the annual Lightning Ridge Easter Festival to defend his 4 time winner’s title of Miner of the Year.

Hundreds travel to the small north-western NSW town for the Easter Festival and the famous Miner’s Challenge, and with prize money and bragging rights at stake the coveted challenge brings in a large crowd.

On Saturday April 16, the Miner’s Rickshaw Challenge commenced with tasks including holding a jackhammer in the air for 2 minutes and running with a rickshaw (wheelbarrow), filling it with opal dirt, and then loading the dirt into a 44 gallon drum.

Qualifying for the finals by winning his heat against several tough contenders Mark, 49, went on to take the win for his 5th consecutive year taking home $1,000 of the $1,700 cash prizes.

“I’ve been mining opals at Lighting Ridge for around 20 years now, and for the last 15 have been involved in many of the Lightning Ridge Easter Festival events,” said Mark.

“Winning my first Miner’s Rickshaw Challenge 5 years ago felt amazing, but to win 5 in a row this year against some great opal miners was phenomenal.”

Mark is currently an Operator at Mount Thorley Warkworth near Singleton, and trains for up to 3 months before travelling to Lightning Ridge each year to compete at festival events.

“It’s a great weekend and I encourage everyone to visit Lightning Ridge next year for the Easter Festival to see me hopefully take home my 6th win.”