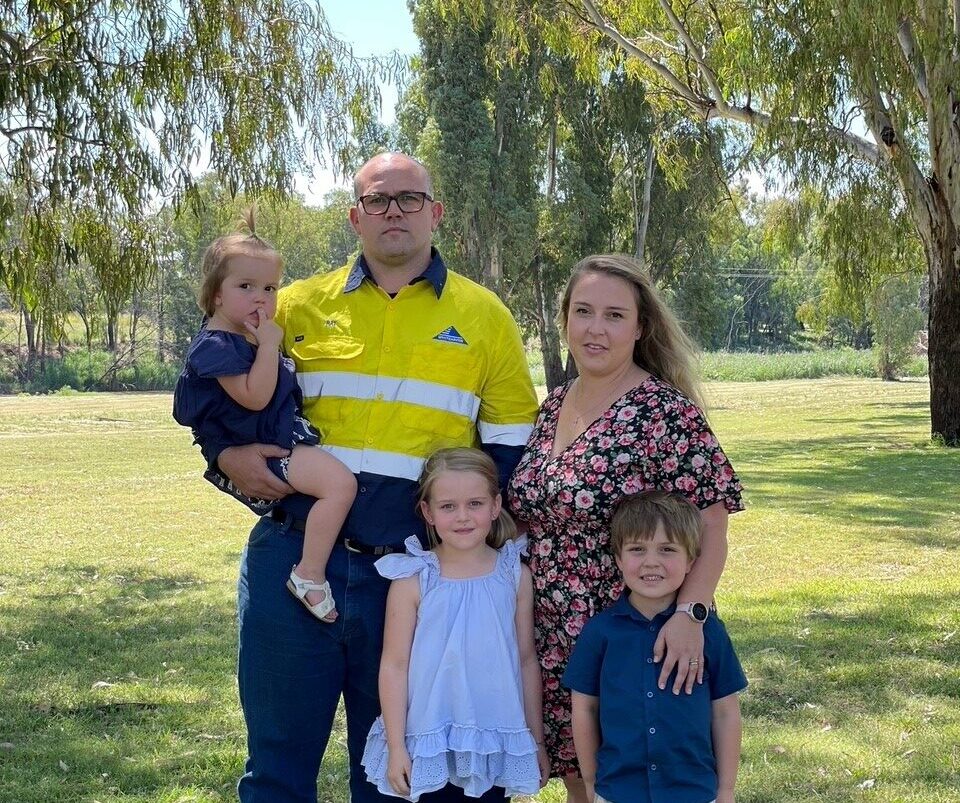 Narrabri Mine surveyor Ray Boyce with wife Jade and their children

North West NSW locals are standing up in support of the proposed extension of Whitehaven Coal’s Narrabri underground mine to ensure the benefits it brings can continue for decades to come.

The mine has been operating safely and successfully since 2012 and is currently approved to operate until 2031. The Stage 3 Extension Project is a proposal to extend the life of the mine until 2044.

In January 2022, the NSW Department of Planning, Industry and Environment (DPIE) released its independent comprehensive technical assessment of the Project, concluding it is in the public interest and recommending it can be approved with conditions. The Extension Project is now being considered by the NSW Independent Planning Commission (IPC).

The Extension will secure the future of the 500 people working at the mine, most of whom live in the region, and ensure the other socio-economic benefits, including spend with local businesses and royalty payments to the NSW Government, can continue for more than another decade.

One of those who wants to see the mine life extended is surveyor Ray Boyce. After spending the first decade of his career in the Hunter Valley, Ray moved to Narrabri with his family four years ago.

“We moved here for the lifestyle, to be able to buy a property where we can have animals and raise our three young kids – we just couldn’t have had that in the Valley,” he says.

“At Narrabri Mine I’ve had more training and exposure to new technology than at any previous workplace; we’re encouraged to try new, better ways of doing things at work and that’s why I see a lot of opportunity for career development here.”

“The community has been so welcoming. My wife helps run a playgroup and I’ve just started helping out with the youth group at our local church.”

“I get to go home to my family every night but if the extension doesn’t go ahead, we’d have to think about how to provide a stable life for our kids. That could mean FIFO or seriously considering our future in Narrabri.”

Ashley Howland was born and raised in Gunnedah, and after leaving town to study chemical engineering spent more than 15 years working at mines in the Northern Territory and northern Queensland. He moved back to Gunnedah in 2019 to join the Narrabri Mine as CHPP Superintendent.

“When I finished school most of my classmates left town as there were limited career opportunities,” he says.

“Now I’m home every night for the first time in my career, and while my two older kids have already left home, my youngest daughter is now at a local high school and settled into the community.

“These days it’s a thriving town, so much so that my wife has seen an opportunity to start a business here as well.

“Twenty odd years ago, I saw a real drain of youth from this town but that’s completely changed. I want the opportunities available now to continue for decades so my daughter and other kids have options to stay in the region.

“From experience, key to that is a range of secure employment opportunities – not just from mining directly, but supplier businesses and all of the other associated businesses and organisations that come from the people and activity here now.

“That’s why I support extending the life of the mine until 2044. If the Extension isn’t approved, it won’t just be my job at risk, but it will have a real flow-on effect.”

One of the business owners who supports the extension is Ross McClure, Specialised Civil Services, a Narrabri-based earthmoving and general contracting company.

“We’ve been working with Whitehaven since the inception of the Narrabri Mine itself, and over that time our business has grown from a handful of employees to around 35. On any given day we have about 20 contractors at the Narrabri Mine,” he says.

“All of our employees live in the Narrabri Shire so our wages stay in town, we procure all of our services locally, and we’re able to give back through community sponsorships and initiatives. That’s an example of the flow on effect of just one business working with the Narrabri Mine.

“Mining has been a saviour for the district for the last five or so years of the drought and it’s one of the few industries that hasn’t missed a beat through COVID up until quite recently. Small retail businesses have struggled because of drought and COVID, but mining has helped keep money in the region.

“If you want to buy a house, start a family, or start a business – these are long-term commitments that need to be supported by long-term, stable employment. Allowing the existing Narrabri Mine to operate until 2044 will provide certainty for the district.”

Glenn Many runs Gunnedah-based Many Fabrication and Engineering, a successful business that’s grown alongside mining in the region.

“I grew up in Boggabri and before mining, the town didn’t have a butcher or a day care centre. That’s all changed thanks to the people who have come to the area for the employment opportunities created by mining,” he says.

“I started my business in Gunnedah and working with the Narrabri Mine and other Whitehaven operations has helped me grow my business. I’ve worked with Whitehaven’s procurement team directly and have experienced their real dedication to working with local as well as Indigenous businesses first hand.

“The number of people and materials required for mining operations means the benefit is widespread, so the repercussions of the Narrabri Extension Project not being approved would hurt not just business but the broader community.”

The NSW DPIE sought public feedback on the proposal in November-December 2020. A total of 82 submissions were received from public authorities, organisations and members of the public. Of these, 63 submissions (76.8%) were in support of the Project, 16 (19.5%) were comments, and 3 (3.6%) objected.