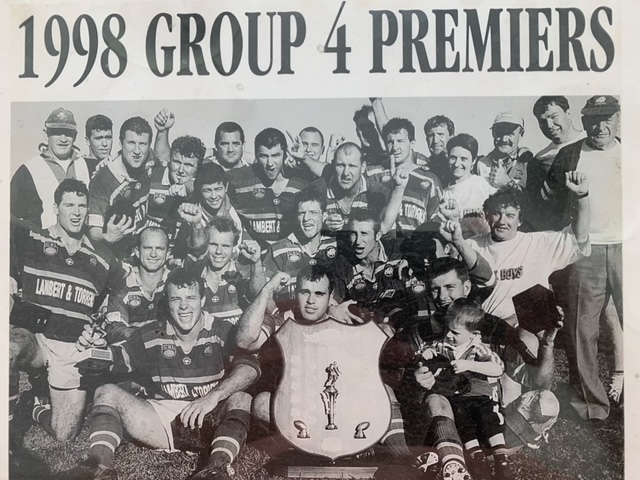 The mighty Gunnedah Bulldogs first grade team of 1998 won the club its first premiership in 13 years that year, forging friendships that have stood the test of time.

Winning a rugby league premiership is a great achievement to look back on, but even more so is the teamwork and friendships built that will last for years to come. Now 24 years later, the 1998 team are catching up for their second ever reunion on April 30 at Kitchener Park, to enjoy a home game for the Gunnedah Bulldogs who will be taking on North Tamworth.

We caught up with Captain and Coach of the 1998 Gunnedah Bulldogs first grade team, Peter Ryman, who shared with us his fond memories of the winning season.

“That year in the major semi-final, we were beaten by Wee Waa 22-4 out at Captain Cook Oval, Wee Waa, but this only fired us up for our next game,” said Peter.

“The next week we played Moree at home and won 70-8, which was a great effort and the boys really played well.”

The Gunnedah region was then hit by a flood of rain over the next week, with Wee Waa hit the worst, making it impossible for the Gunnedah Bulldogs to get to Wee Waa for the grand final. So the match was moved to Narrabri, with the team from Wee Waa coached by John Harvey making their way there by boat across the river to play for the coveted premiership trophy.

“That day we took home the premiership victory against Wee Waa 33 to 14 which was a great feeling, and 24 years later the team are all still mates to this day,” said Peter.

“I think it’s very important for us to get together and remember what we achieved that year because we haven’t won one since, so as you can see it’s bloody hard to win.”

The team had their first reunion 10 years ago, with this to be their second, so fingers crossed the Bulldogs take home the win on April 30 as the 1998 Gunnedah Bulldogs reminisce on a victorious year of footy.