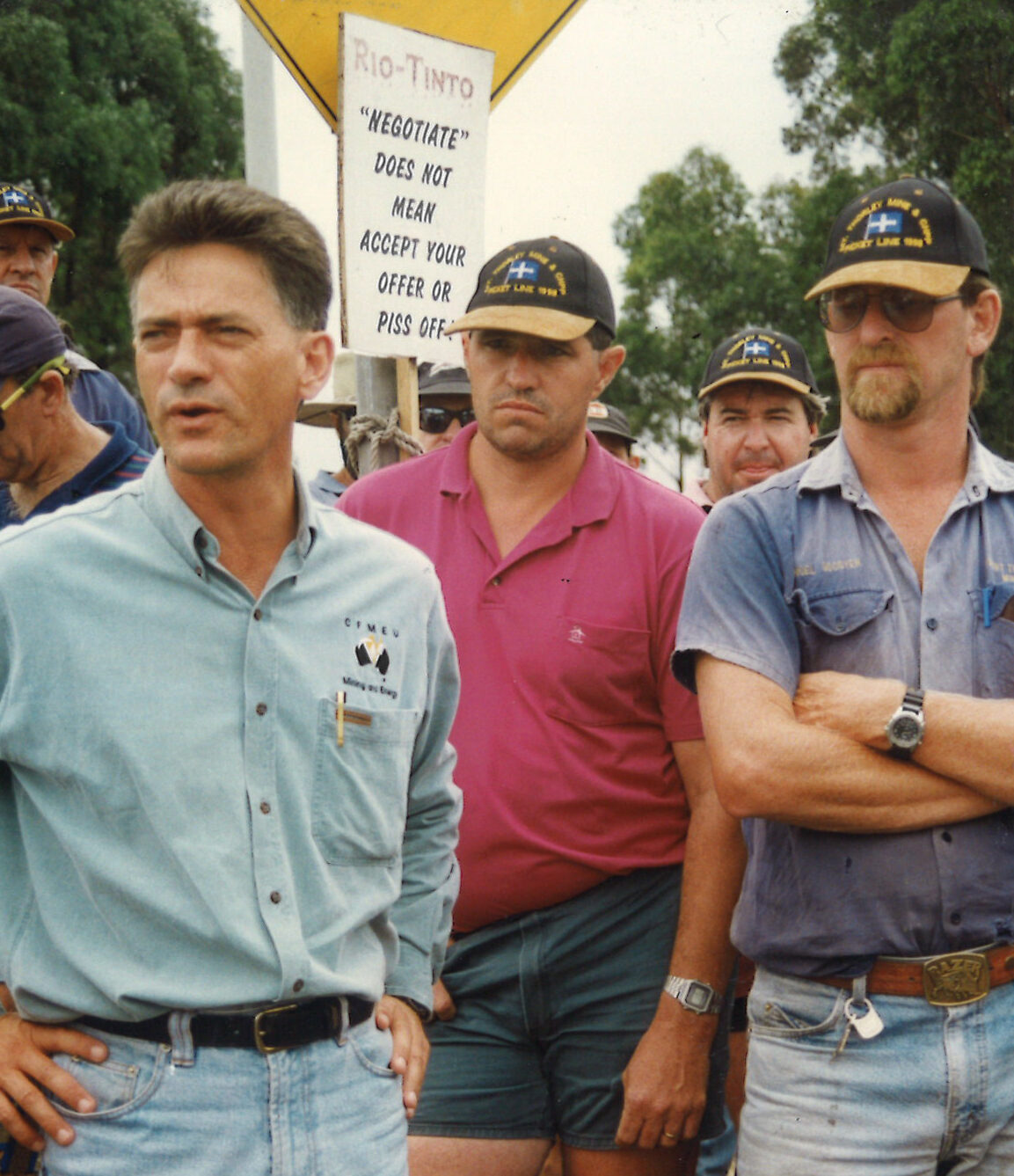 Peter with members at Mt Thorley in 1999

Before Christmas, at a meeting of Union Delegates from coal mines and power stations across the District, I was honoured to be part of a very special presentation – a send-off for Peter Jordan, the long-term President of the Northern Mining and NSW Energy District of the Mining and Energy Union.

After 35 years as a Union Official, Peter retired in January 2022. As per the democratic processes of our Union, an election will now be held to fill the position and nominations are open until 28 February. Long-term District Vice President Robin Williams has been endorsed by the Board of Management to act as President until the election is finalised.

Peter leaves behind a strong District organisation and an excellent team of dedicated Officials and staff, whom he has mentored and supported over many years. I’m confident of a smooth and successful transition to new leadership.

Peter is a true legend of our Union. In total, he has been a Member for more than 46 years.

He commenced work at Liddell Power Station in 1975.  In 1986 he became an Official with one of our predecessor Unions the FEDFA, before a series of amalgamations led to its current form. In 2009 Peter was elected to the role of District President.

Peter has been involved in some of the biggest disputes our Union has ever seen, including the ongoing industrial battle with Rio Tinto that lasted for more than 20 years. That dispute delivered the biggest payout in our Union’s history, with over $25 million dollars for Members who were unfairly dismissed at Hunter Valley and Mt Thorley mines in the late 1990s.

During my many years as a Union Member, Delegate, District Official and now National Official, I have always known Peter Jordan to be a highly effective leader with high expectations, excellent judgment and fierce dedication to Members. “What would Peter do in this situation?” is a question I often pose to myself, when faced with a dilemma and I expect it is something I’ll continue to do throughout my whole career.

Two of Peter’s acts in his final year demonstrate his dedication to the legacy of our Union and his commitment to its future. In November, I was proud to be at the unveiling of the restored Jim Comerford Memorial Wall at the District’s Cessnock Office, which lists the names of all identifiable coal miners killed at work in the history of mining in this region. The wall is a source of comfort for families and community members to remember lives lost and the price paid by working people for the prosperity delivered by the coal industry. And at our National Convention in March last year, Peter’s leadership was instrumental in planning and progressing a vision for an independent future as a Mining and Energy Union, a vision that is still a work in progress. Peter assessed the situation we were facing within the CFMMEU and advocated for bold action to form a new union that puts the interests of mining and energy workers first.

Peter will be missed by many across the mining industry for the constructive and knowledgeable role he played. He has represented our Union in many industry and government forums, understanding that workers benefit when they have a voice at the decision-making table.

On behalf of the National Union, I was pleased to present Peter with a Miners Lamp inscribed with this message: “Peter Jordan – For your unwavering and inspired leadership, your fierce advocacy of the Union and Mining & Energy Workers, and your lifelong commitment to the working class… All the best in your well deserved retirement.”

We wish Peter, along with his wife Ellen and their family, all the best for the future.