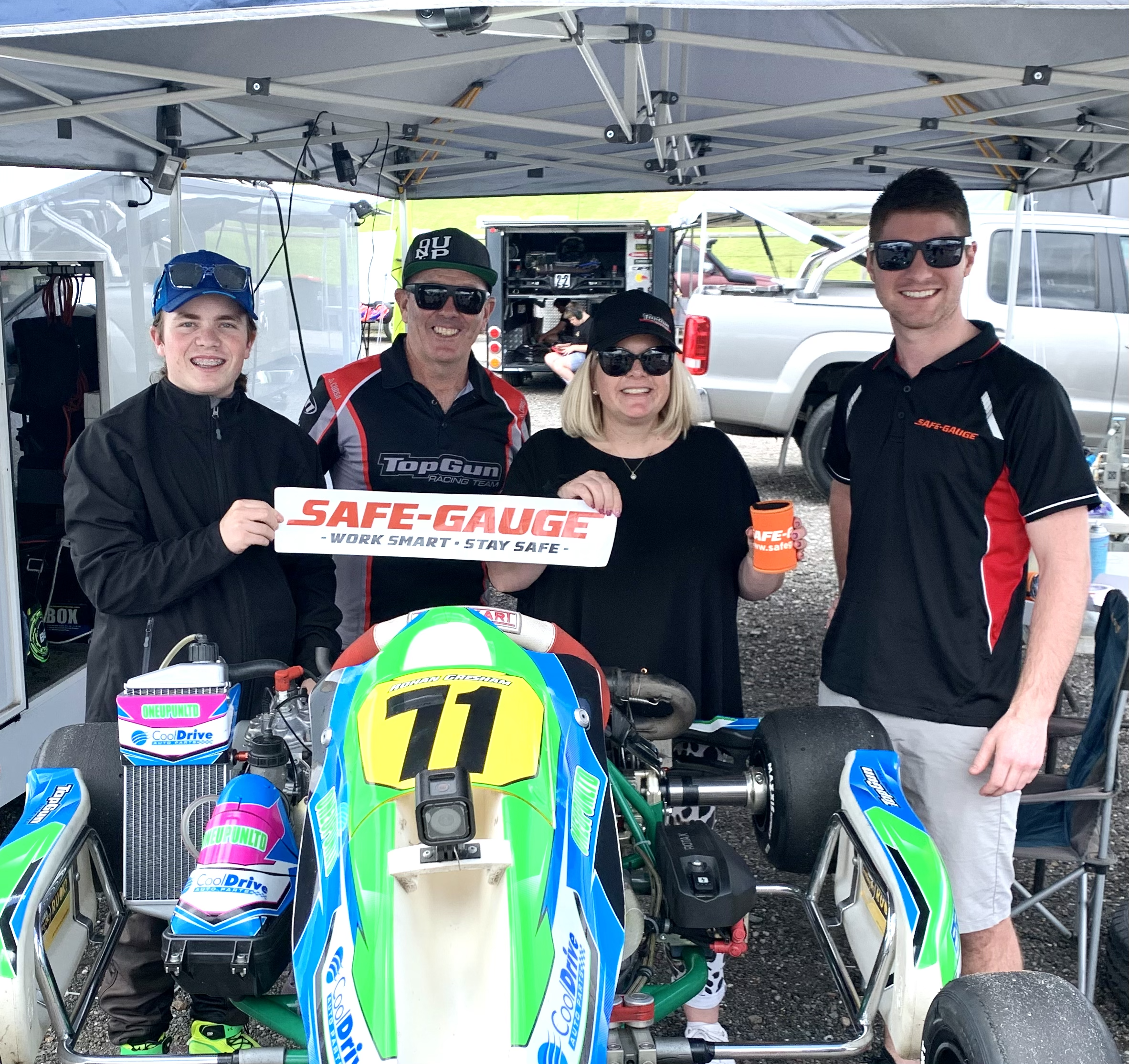 Rohan Gresham started karting 3 years ago at the age of 13, competing in his first AKC last year. Seeing the young racers potential and ambition, Safe Gauge have come on board as Rohan’s proud sponsors in the 2022 AKC.

By chance Rohan was working at Xtreme Karts Warner’s Bay when Safe Gauge Owner Luke Dawson and his team came in for their Christmas Party. Conversation quickly turned to Rohan’s racing career. “We all ended up having a conversation about sponsorship and I threw in that he could sponsor me,” said Rohan.

“He gave me a response that I wasn’t expecting, I don’t think he thought for 10 seconds before he said yes.”

“I’m really happy to be representing Safe Gauge because they are a local business, and because of what they do to keep people safe.”

Since he was little Rohan said he has always wanted to be a race car driver. “Lightning McQueen from Cars definitely played a huge role, I was so obsessed with Cars I burnt out two DVD’s,” Rohan chuckled.

Motorsport was something Rohan was born into, with his dad racing karts in the 90’s. “Dad probably influenced me to hop into karts, and I’m so happy that he did, I can’t think of anything that I have enjoyed more than racing over 110kmph, half a centimetre from the ground with nothing to protect you but a helmet; there is just nothing like it.”

That love for motorsports shone through in the 2021 AKC for Rohan. Round 1 in Ipswich saw him finishing around the mid pack all weekend, but when it got to the final, he’d managed to jump 5 places by turn 2 going from 20th to 15th. With only 2 laps to go Rohan made a move for 14th when his rear bumper struck the kerb, causing Rohan to drop back to 26th.

“I was more than nervous for my first round because I was challenging myself more than I have ever done before, but it was definitely a round of learning,” said Rohan.

In Round 2 at Todd Road, Melbourne Rohan had to qualify in the top 36 to race the final and qualified in 32nd. “The final race was definitely the hardest race I have ever driven going from 32nd to 15th in just 18 laps,” said Rohan.

Round 3 came along in Bolivar, South Australia, a round that Rohan says proves that in motorsport you can have the highest of highs and the lowest of lows.

“The grid for qualifying was set and I was heading out the gate on Saturday morning with my knees shaking, I’d never been so nervous in my life.

“But with all this pressure I put on myself I went from 6th to 27th in qualifying and I was gutted, but I’m sure if I was put in that situation again, I wouldn’t have the nerves get to me and I would have much more experience.”

In the 1st heat from 23rd in Group C Rohan fouled a plug coming onto the start line unfortunately taking him out of the running for the final.

After a huge year Rohan says he has a lot of people to thank for supporting him in his racing including Luke Dawson from Safe Gauge, Troy Hunt and Cody Brewczynski and Tim Slade from TopGun Driver Academy, Jace and Grant Lindstrom from Pro Karting Victoria, Nathan and Paul Taylor from The Kartworks, Tim Blanchard and Peter Bink from CoolDrive, Kev & Rebekah Gilks from OneUpUnltd, Social Media Manager Annalise Gresham and finally Rod Hughes, Clayton and Oscar Priest, Jason Boersma, Ken Mulholland, Coleen Kehoe and all the crew at Lifeline and RUOK?

“Of course, none of this would be possible without my parents Paula and Andrew Gresham,” said Rohan.

This year Rohan will be racing for TopGun Racing Team in the AKC in KA3 senior performance in number 11, the Rotax Pro Tour, as well as club rounds at Newcastle and Hunter Valley Kart Club and the NSW State Championships, so keep an eye out for the young gun. Rohan Gresham is the one to watch in 2022.