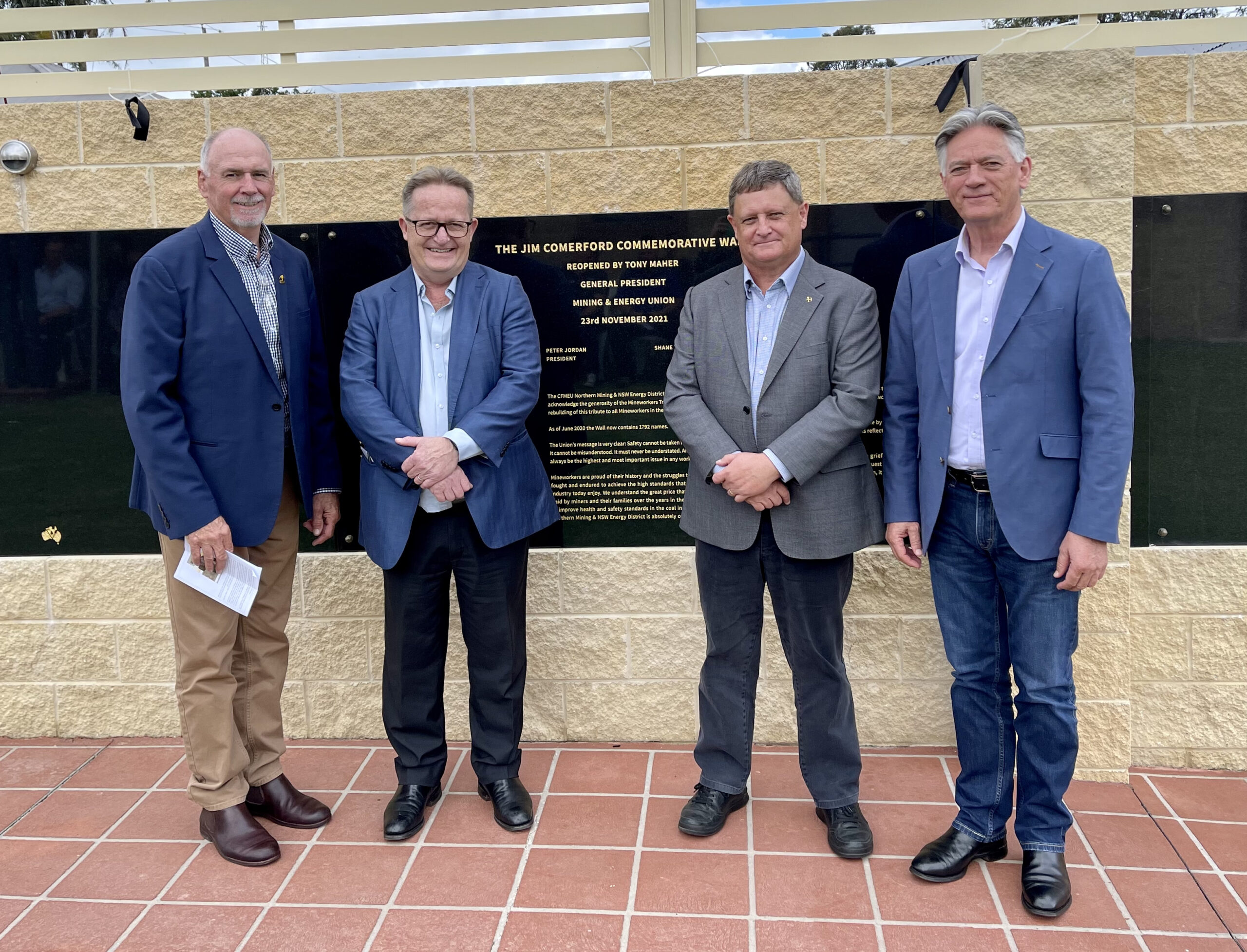 The 23rd of November was a special day for our union. After the disappointment of cancelling our annual Memorial Day in September for two years in a row due to Covid restrictions we gathered to officially unveil the newly restored Jim Comerford Memorial Wall at Cessnock.

The original wall was unveiled by Prime Minister Paul Keating in 1996. However, structural failings of the wall and deterioration of the brass plaques meant an overhaul was needed.

With support from the Mineworkers Trust – our union’s charitable foundation – our District has rebuilt the wall with striking black granite plaques to honour and remember coal miners killed in the Northern District Coalfields.

After painstaking research to identify and correct any errors or omissions of names on the previous wall, it now features 1793 names. The names tell a story about the history of coal mining in our District and the human toll it has taken. The youngest name on the wall is nine-year-old William France, killed at Pacific Colliery and the eldest is 80-year-old William Howes, killed at Abermain Colliery.

We were delighted to invite our Mining and Energy Union General President Tony Maher to officially unveil the wall before an audience of union delegates from across our District.

Tony spoke about the legacy of Miners’ Federation legend Jim Comerford, who passed away in 2006 aged 93.

Jim started working in the mines as a pit boy at Richmond Main Colliery in the 1920s aged just 13. His firsthand experience of the brutal Rothbury Riot in 1939 – where police fired on locked out coal miners – reinforced a lifelong commitment to the union and the working class.

Jim was District President of our Union for 20 years from the 1950s through to the 1970s, using his intelligence and commitment to build a strong and effective union that substantially improved working and living conditions for coal miners. We are pleased to honour him with the Memorial Wall and commemorative bust as we endeavour to continue serving coal miners and our mining communities with the same spirited determination.

Tony reflected on the importance of the District’s annual Memorial Day at the wall as an event for the community to come together, remember our history and support grieving families, but as he noted, the Memorial Wall also provides a place of solace and remembrance all year round.

“This wall depicts the true cost of the coal that we mine. The union and its charitable trust has spent a significant amount of money on the original Jim Comerford Memorial Wall and now this beautiful incarnation.

“The fact that it sits in the grounds of the union office in Cessnock but is available to the community all year round means that people can come to Memorial Days or visit in more private circumstances any time that suits. It shows what a gift it is from the Mining Union to the mining community of the Hunter. It is a gift that should live on forever.”

Tony’s words beautifully sum up the significance of the Memorial Wall to our union and our community.

We were again reminded of the dangerous nature of the coal mining industry with the tragic death of Queensland coal miner Clark Peadon, who was tragically killed at Curragh Mine just two days before we unveiled the restored Jim Comerford Memorial Wall. We held a minute’s silence in Clark’s honour and we know that his memory will be held dear by coal miners everywhere. May he rest in peace.