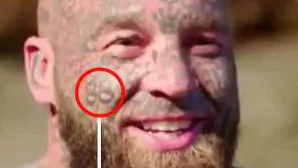 British reality show The Chop has been cancelled after a contestant appeared with Nazi tattoos on his face.UK TV channel Sky History pulled the reality competition series The Chop: Britain’s Top Woodworker off the air last week after an investigation was launched into contestant Darren Lumsden’s inkings.
The tattoos – which included a large ‘88’ – have since been deemed too offensive to be on air.
The investigation proved the symbols on Lumsden’s face “could be connected to far-right ideologies…