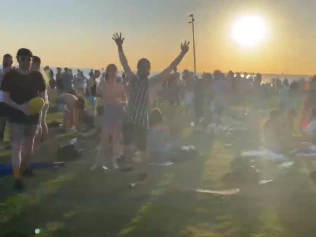 Hundreds of Melburnians have flocked to the city’s beaches as Victoria tentatively moves to “COVID normal” again.The rowdy crowd was filmed at Melbourne’s St Kilda beach late Friday afternoon as the city embraced its warmest weather in months.
7 News reporter Paul Dowsley was surrounded by hundreds of people, with one woman kissing the camera lens and leaving a lip-shaped smudge on the glass for the rest of his livecross.
A number of Melburnians also gave the rude finger to the camera as one m…