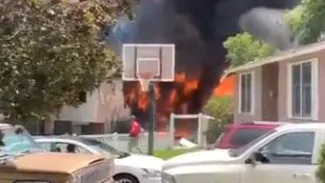 Multiple people are feared dead after a light plane crashed in the suburbs of a US city after it burst into flames among Utah homes.There were six people on board at the time of the tragic incident, police say, but some are believed to have survived.
The aircraft plummeted into a house in the state’s city West Jordan, which burst into flames leaving one person in the home with injuries.
Another three houses were damaged as rescue crews remain on the scene dismantling the horrific rubble.
It h…