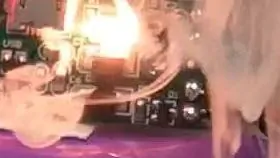 Chinese researchers have discovered timesaving fast chargers that have become increasingly popular in recent years can be hacked to overload and could start fires.Stories about phone fires are nothing new: Samsung famously had a problem with its Galaxy Note 7 phones being prone to fire.
Several years after Samsung fixed the problems causing the spate of exploding phones, the USA’s airline safety agency won’t let you take one on board a plane and have signs at the airport telling you as much.
R…