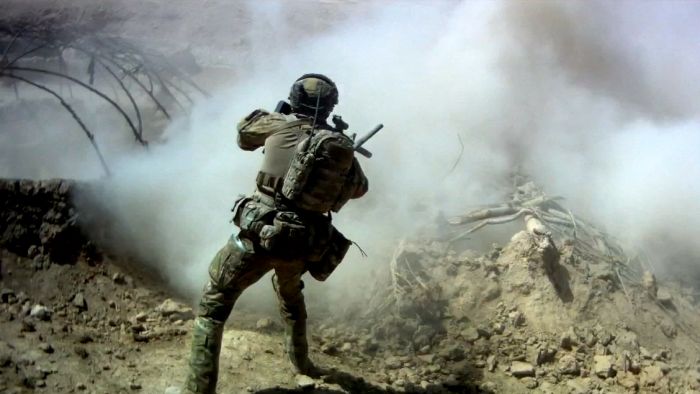 Australian special forces allegedly planted the same weapon on the bodies of two different Afghan civilians after a raid in which locals say unarmed civilians were executed, the ABC can reveal.
Key points:

An AK-47 assault rifle with teal-coloured tape wrapped around the stock was photographed next to two bodies in separate locations and logged in the special forces database after the raid at the village of Shina in May 2012.
The operation by members of 3 Squadron SAS left three Afghans dead, with the special forces claiming they were all insurgents and legitimately killed.
Australian sources have told the ABC that while one of the dead men was a Taliban fighter, the other two were civilians. This is backed by accounts from the families of two of the men.
ABC Investigations has spoken to several members who served on that 2012 special forces rotation of Afghanistan who say that so-called “throwdowns”, such as assault rifles and radios, were often used to cover up unlawful killings.
Sakhi Daad said he saw his brother-in-law shot in the head during an Australian special forces raid on his village of Shina.(ABC News)
“Often people who had been killed had weapons placed on them and