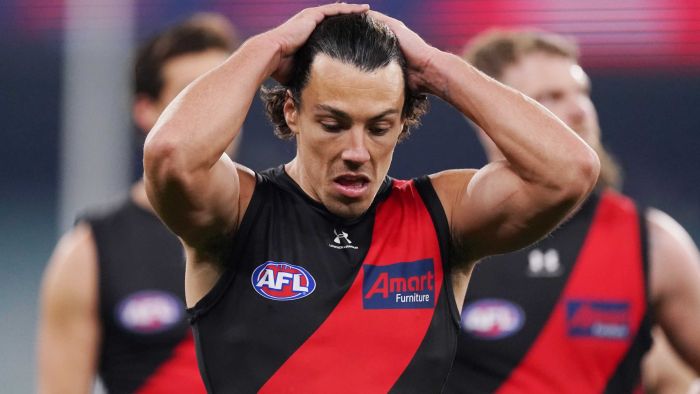 Dylan Shiel will miss two matches for rough conduct over the bump that floored North Melbourne’s Curtis Taylor after the Essendon star was unsuccessful in appealing the severity of his suspension at the AFL tribunal.
Key points:

The jury on Tuesday night agreed with the match review officer’s initial grading of the incident as careless conduct, high contact and high impact, and declared: “It was fortunate the consequences were not greater.”
Taylor played out the match on Saturday night after passing a concussion test and scans later cleared him of structural damage.
In an unusual hearing that lasted more than two-and-a-half hours, Essendon’s main argument centred around their belief that the impact grading should be reduced from high to medium or low.
Essendon’s legal counsel Adrian Anderson also raised an infamous incident from the 2017 preliminary final, where Shiel was hit high by Richmond’s Trent Cotchin.
Cotchin was cleared of wrongdoing, playing in the Tigers’ premiership the following week, and Shiel said that incident had changed the way he contests the ball to focus more on protecting himself.
In a last-ditch attempt to reduce the ban, Essendon called on Port Adelaide premiership coach Mark Williams to provide a character reference for Shiel.
Williams was one of Shiel’s coaches at Greater Western Sydney and his daughter is the player’s long-term partner.
Dylan Shiel will miss matches against the Bulldogs and Adelaide.(AAP: Michael Dodge)
But the jury made up of former AFL players Stephen Jurica, Shane Wakelin and David Neitz was ultimately comfortable with the bump’s high impact grading and the two-match ban.
The jury made note of the bump’s potential to cause injury, Taylor’s vulnerable position, Shiel arriving at the contest at speed, the significant force involved and the fact Taylor was tested for concussion.
Shiel will now miss Essendon’s meetings with the Western Bulldogs and Adelaide before he is available for selection again in round nine.
Ben Long accepts three-match ban
Ben Long did not contest his proposed ban during his short hearing.(AAP: Michael Dodge)
Earlier on Tuesday night, St Kilda’s Ben Long pleaded guilty to a rough conduct charge over the bump that concussed Fremantle ruckman Sean Darcy and was banned for three matches.
The 22-year-old did not contest the careless conduct, high impact and severe impact grading of the incident, but argued Darcy quickly dropping to his knees had contributed to the high contact.
St Kilda has started strong in the AFL this is how they’re winning
Could the Saints be on the march to the AFL finals? Cody Atkinson and Sean Lawson analyse how an overhaul to the playing list and coaching staff could really work out.
Read more
Both the AFL and St Kilda agreed three weeks was an appropriate penalty.
Darcy was concussed by Long’s bump and played no further part in the match on Saturday, which was won in dramatic fashion by the Dockers.
The Dockers’ medical report the day after the match also noted Darcy had mild ongoing neck pain and concussion symptoms.
The ruckman is in doubt for Fremantle’s clash with cross-town rivals West Coast on Sunday.
Long will miss the Saints’ meetings with Adelaide and Port Adelaide in South Australia next week, as well as a round nine fixture that has not yet been scheduled.
AAP