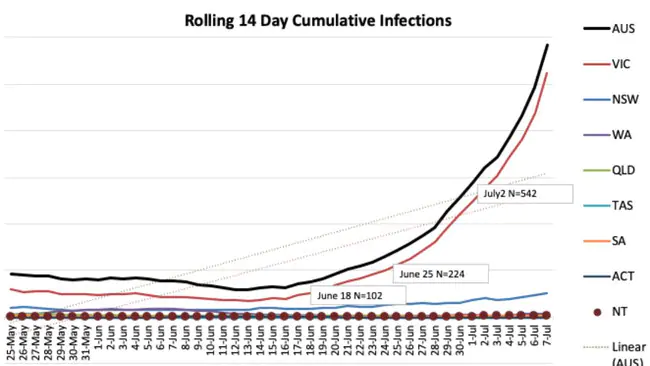 You hear it all the time. Is this our second wave?But it turns out the question posed by reporters at press conferences and pondered by colleagues over zoom chats has been poorly worded. Because Australia didn’t have a first wave … until now.
Professor Nick Talley is the editor-in-chief of the Medical Journal of Australia and has been watching the curve carefully since the pandemic reached Australia.
He told news.com.au Victoria and NSW are experiencing the real first wave of the virus and that it was a mistake to try for the suppression method when Australia should have been aiming to eliminate COVID-19 altogether.
“Obviously in March when we were all very worried, it was a little bit unclear how much of the virus was in the community,” Professor Talley said.
“Some of us worried it was widespread. But if it was, the first lockdown knocked that off. It looks as if most of it was international travellers.
“Now in Victoria and possibly NSW we have widespread community transmission. That is new. That’s why I say this is the first real wave. We had a trial wave. We eliminated it, but now we are not in that situation so it’s all changed. It’s a different enemy.”
He said Australia has a chance before the virus takes off on an exponential curve to eliminate the virus, but it won’t be easy and Australians won’t like it.
“New Zealand’s experience shows that if you’re an island nation like Australia then you can eliminate the virus.
“In my view it can still be done. There will some short-term pain to make that happen.”
Professor Talley said what happens next depends largely on what happens in NSW and Queensland.
RELATED: Stay updated on our latest updates here
“In Victoria they’ve shut down Melbourne. They may have to go wider than that. It may be in the regions. The real issue is the length of shutdown. The type of shutdown is appropriate, it’s the length that matters now.”
He said that elimination would require a very aggressive strategy. It could be considered a success when there are zero new cases nationally for two incubation periods.
“The theory that we can ringfence and eradicate the virus in Victoria has failed.”
Victoria recorded 270 new cases of the virus on Tuesday. Of those cases, 242 were spread through the community by an unknown source. In NSW, there were 21 new cases on Monday.
Naturally, as case numbers grow, the conversation about eliminating the virus in Australia is gathering momentum.
The ABC’s resident coronavirus expert, Norman Swan, told the 7.30 program: “The next four or five weeks will shape how Australians will live until a vaccine comes along.”
Victoria’s Chief Medical Officer Brett Sutton told reporters: “As a public health person, I’d be very happy if elimination were a feasible thing to achieve.”
He continued: “I would hope that as we move through this phase in Victoria … that we don’t close ourselves off to a re-evaluation … of what the pros and cons (of elimination strategy) are.”
Professor of Epidemiology at UNSW and WHO adviser, Mary-Louise McLaws, told news.com.au she still supports “attempts to achieve ‘close-to-eradication’ and so I still believe going for suppression is not in the long run the most effective approach”.
“It is not yet too late for Victoria,” she said. “NSW case numbers without the return travellers (who have not been a high risk for spread indirectly to the community through hotel staff) have been low over two incubation periods which is used to determine the level of eradication and control.”
But Professor McLaws believes NSW could be on the cusp of a significant uptick in cases if the current number is not controlled.
She told The New Daily: “If it gets to about 100 cases across two incubation periods – about 14 days each – in very quick succession it doubles and then after that, it can double and triple each period.”
NSW Premier Gladys Berejiklian is now facing some difficult decisions. But if the virus continues on its current trajectory, so too does Prime Minister Scott Morrison.
Queensland Premier Annastacia Palaszczuk already made a hard decision. On Tuesday morning, she announced that residents from NSW hotspots are banned from Queensland.
“Travellers who have been in a COVID-19 hotspot within the past 14 days can’t quarantine in Queensland and will be turned away at our borders,” she said.
[email protected] | @ro_smith