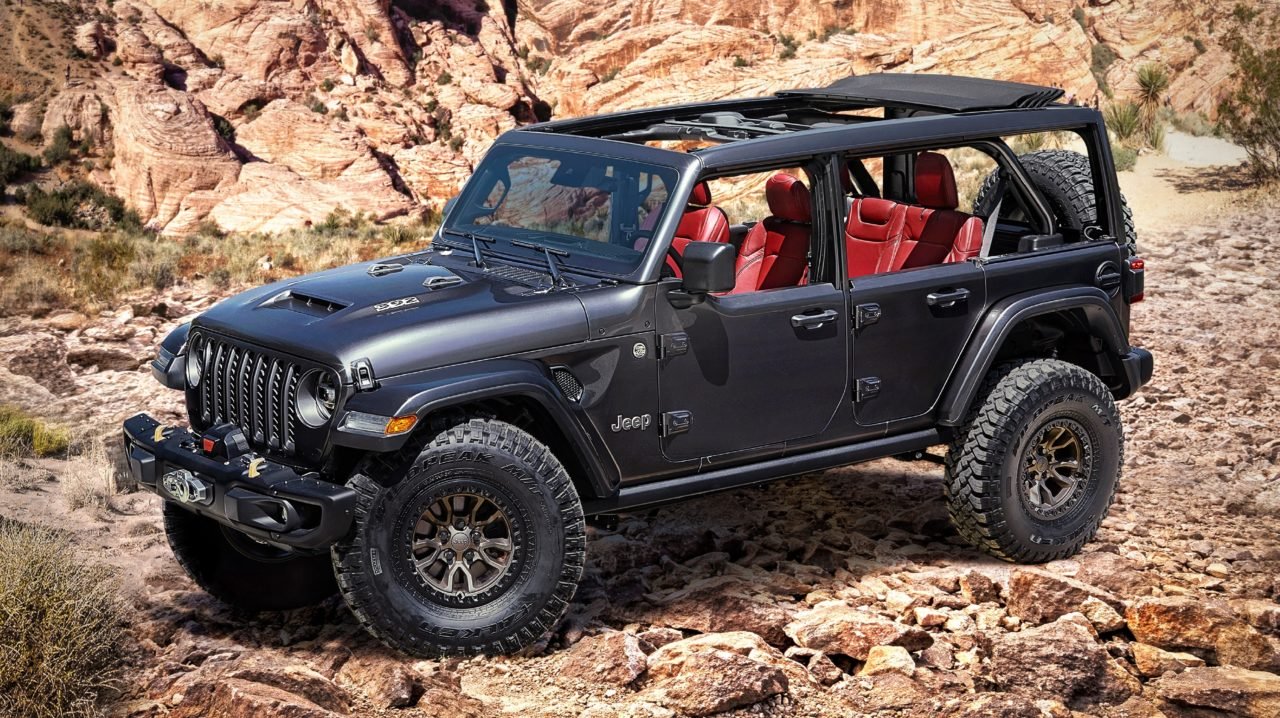 Its July 13, the day of the 2021 Ford Bronco reveal, and Jeep has just announced a 6.4-litre V-8 Wrangler Rubicon 392 Concept clearly as a way to take some spotlight off FoMoCos new Wrangler competitor. But it wont work, because weve seen this before.
I realise that writing, essentially hey, heres a car and its not all that interesting isnt exactly a way to get readers to click on my story, but I just have to be honest: The 6.4-litre V-8 Wrangler Rubicon 392 Concept is not intriguing, mostly because of the last word in its name.
Were Jeep showing a production-ready Wrangler with a Hemi (and this Jeep may very well become one keep reading), Id probably still be doing doughnuts in the Chrysler employee parking lot, celebrating the companys correction of what I think has been a great oversight since the JK Wrangler Unlimited came out in 2007.
You see, when the TJ Wrangler became the four-door JK Unlimited after the 2006 model year, it essentially entered a new class of SUV. It grew in pretty much every dimension, especially curb weight, and yet, under the hood, the strongest engine offering remained a six-cylinder. At that time, it was a 3.8-litre minivan motor, as many called it, thanks to its history under the hood of Chrysler minivans. And that V6 was weak. Truly weak.
Yes, in 2012, Jeep threw a 260 horsepower Pentastar under the hood, but frankly, I think most of the world knows that the Wrangler Unlimited always deserved a V8. Wrangler buyers have lots of money, and yet, theyve been stuck with a boring-sounding, high-revving V6 for the last eight years? That doesnt seem right. (OK, there is a 2.0-litre turbo, but its not any more powerful than the Pentastar, though the 3.0-litre turbodiesel is a nice new offering, but its still too slow for the 4,500+ pound brick).
All of this might lead you to think that this new Hemi concept Wrangler is cool, except for the fact that because, as I said, most of the world knows that the Wrangler Unlimited always deserved a V8 many folks have been installing Hemis into JKs and JLs for years. AEV has been showing off Hemi four-door Wranglers since 2007, Jeep itself has put V8s into many Wrangler concepts throughout the years (The Sandstorm below has a 6.4-litre in it, and the Trailcat below that has a 6.2-litre supercharged Hemi), and a number of folks in off-road world have been V8-ifying their rigs, especially since the JK came out (because why spend $US30,000 ($42,975) on axles, tires, bumpers, and other mods only to be held back by a ho-hum V6?).
The point is, a Hemi Wrangler concept aint new. And its really not that alluring, especially not in the context of an All New Ford-Freaking-Bronco!
What is more interesting than the new concept Jeep is the brands hint that a Hemi engine might actually make its way into a Wrangler. Heres the most important quote from Fiat Chryslers press release for Yet Another V8 Wrangler Concept:
The last time the most recognisable vehicle on the planet was offered with a V-8 engine was in the 1981 Jeep® CJ, with its 5.0-litre V-8 that delivered 125 horsepower and 100 kg.-ft. of torque.
Jeep enthusiasts have been clamouring for a V-8-powered production Wrangler in recent years and the new Jeep Wrangler Rubicon 392 Concept is an indication they may soon get their wish.
[]
Jeep Wrangler enthusiasts have been asking us for a Wrangler V-8 and our new Wrangler Rubicon 392 Concept proves that we have the ability to make that happen, said Jim Morrison, Head of Jeep Brand FCA North America. From the recently introduced 29-mpg Wrangler EcoDiesel to our award-winning Jeep Gladiator, and the upcoming Wrangler 4xe plug-in hybrid electric vehicle, Jeep is clearly listening to its customers. We are anxious to gauge their reaction to this new Wrangler Rubicon 392 Concept, a vehicle that delivers an incredible and unmatched level of fun-to-drive performance and capability, on- and off-road.
Road & Track claims to have confirmed via a source inside Jeep that V8 Wrangler will become a reality. From the car website:
The Jeep Wrangler Rubicon 392 is headed into production, according to a source inside Jeep. The company has apparently produced 30 V-8 Wrangler prototypes at the Toledo, Ohio Wrangler plant something our source says would not happen for a one-off concept.
I hope it happens, and that the companys engineers were able to figure out underhood packaging constraints as they relate to both powertrain cooling and frontal crash protection.
Anyway, I guess its about time I actually say something about this concept Jeep, dubbed 6.4-litre V-8 Wrangler Rubicon 392 Concept. It makes 450 horsepower and 204 kg-ft of torque, which it sends through an eight-speed automatic, a full-time transfer case, 3.73 gearing in lockable Dana 44 axles, and then to 37-inch mud-terrain tires. Apparently, the Jeep can do zero to 60 mph (97 km/h) in under five seconds.
There are some nice red seats, steel bumpers, a Warn winch, beadlock wheels, and a two-inch Jeep Performance Parts lift kit.
As another Jeep Wrangler concept with a V8 under its hood especially one aiming to take the spotlight from the Ford Bronco its just meh. But as a production vehicle, I admit that it would be epic (Jeep said no comment when I asked how production-ready this concept vehicle is).