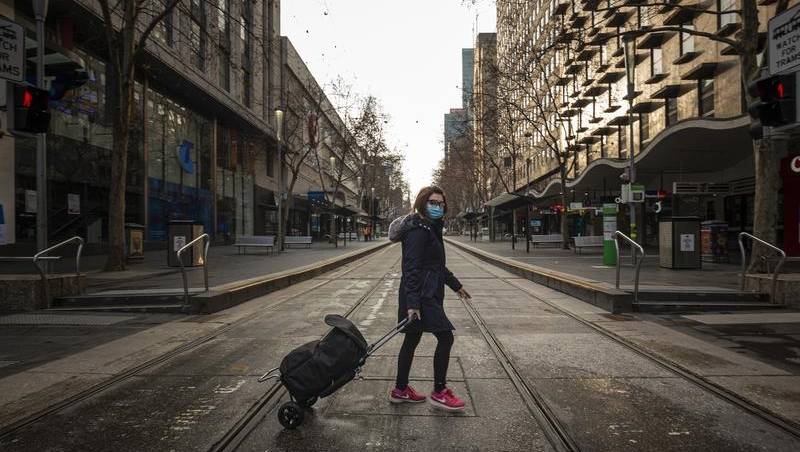 Two more Victorians have died from coronavirus as the state’s health officer warns hundreds are expected to be hospitalised within the next fortnight.
A man and a women in their 80s died in hospital on Tuesday, taking the Victorian toll to 26 and the number of Australian pandemic fatalities to 110.
Victoria recorded 270 new cases on Tuesday, dashing hopes the outbreak was easing in the nation’s worst-hit state.
“It’s not as high as our biggest single day, but we haven’t turned the corner yet,” Chief Health Officer Brett Sutton told reporters earlier on Tuesday, before news broke of the two latest deaths.
“I hope to see that this week, but there are no guarantees.”
The number of people in hospital with COVID-19 in Victoria had also shot up, from 72 on Monday to 85 on Tuesday.
Of the state’s 26 intensive care patients, 21 were on ventilators to help them breathe.
Professor Sutton said with 1803 active cases in Victoria, he expects more people to end up in hospital with the virus.
“There’s often 10 per cent to 20 per cent of all coronavirus infections who require hospitalisation, so that’s a couple of hundred individuals at least (who) will require hospitalisation in the next couple of weeks,” he said.
Up to 80 staff and residents at aged-care homes across Victoria have tested positive to the virus, including 28 people at Menarock Aged Care in Essendon.
Several residents of the facility have been taken to hospital for treatment, but Prof Sutton said that was not necessary for all aged-care residents who test positive.
A special ward has been set up at the Royal Melbourne Hospital for elderly patients.
Prof Sutton said further restrictions may be considered to curb the spread of community transmission.
“We would do the minimum required, because we know how much of an imposition it is on businesses and people’s lives, but if it’s required to reduce transmission, then it has to be in play,” he said.
Premier Daniel Andrews said it was too early to decide on further restrictions, noting metropolitan Melbourne and Mitchell Shire are just one week into a six-week lockdown.
He also confirmed Victoria’s last returned overseas travellers would finish hotel quarantine by Thursday.
International flights will continue to be diverted away from Melbourne indefinitely, meaning the state’s botched hotel quarantine program will stay suspended.
An inquiry into the scheme led by retired judge Jennifer Coate begins on Monday, after it was revealed protocol breaches by security guards at the Rydges on Swanston and Stamford Plaza hotels led to outbreaks.
After telling ABC radio on Monday all of the state’s active cases could possibly be linked back to the hotels, Prof Sutton on Tuesday deflected questions.
According to The Age, a senior bureaucrat raised concerns private guards were ill-equipped to run the program and urged for police to be called in, just hours after it launched on March 28.
“Those matters – who was in charge, how that worked, decisions that were made, all of those issues – are, rightly, the province of retired judge Coate,” Mr Andrews said on Tuesday.
The premier also hit back at the latest Essential poll, which showed public support for the performance of the Victorian government had taken a hit.
Those rating the government’s performance as very or quite poor doubled from 13 per cent in June to 26 per cent this week, with almost half the Victorians surveyed feeling very concerned about the threat of COVID-19.
“This is not a popularity contest, it’s a global pandemic,” Mr Andrews said.
Meanwhile, about 200 paramedics, stood-down staff from Jetstar, Medibank, Telstra and Qantas and about 1000 Australian Defence Force personnel are expected to join Victoria’s public health team.
Australian Associated Press