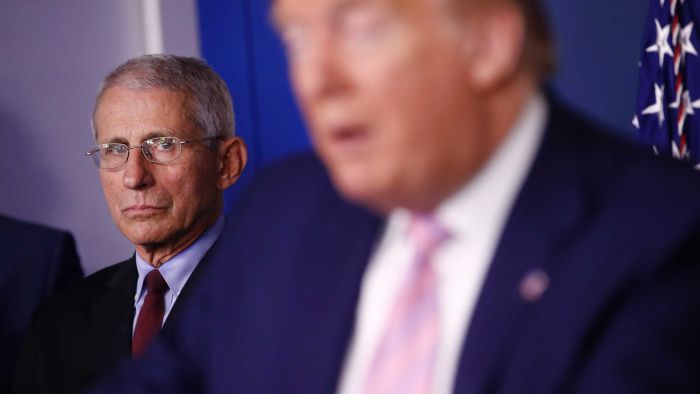 US President Donald Trump and the nation’s top disease expert, Anthony Fauci, have long offered competing narratives around the US coronavirus response.
Their differences reached a head this weekend after a controversial tweet and a White House memo prompted widespread speculation that Dr Fauci was at risk of being fired.
Here’s what you need to know.
Who is Anthony Fauci?
US health chief ‘cautiously optimistic’ of coronavirus vaccine
Dr Fauci’s official title is the director of the National Institute of Allergy and Infectious Diseases, but most Americans know him as the top disease expert or the guy leading the National Coronavirus Task Force.
Dr Fauci has been a celebrated medical expert since the mid-1980s, when he helped research and develop a treatment for HIV/AIDS. Former president George W Bush awarded him the Presidential Medal of Freedom.
The 79-year-old has re-entered the spotlight this year, becoming one of America’s most trusted public servants for his straight talk and reassuring manner when it comes to COVID-19.
Adding to the public’s respect is Dr Fauci’s apparent ability to both get through to the famously stubborn Mr Trump and tactfully disagree with him in public.
The doctor’s comments have grown increasingly pointed over the past few weeks as nationwide case numbers hit 3 million and the number of deaths in the US rose above 135,000.
“We have let the local public health infrastructure in our country really go into tatters,” he said in an interview today as he urged states to slow down or rollback economic re-opening processes.
“When we need good, local public health capability, it’s not optimal. It’s not as good as it should be.”
Contrast that to Mr Trump’s comments on Friday: “We are winning the war. Our testing is far superior to anybody’s that’s helping greatly, but it flared up in areas where they thought it was ending. They’re going to have it under control very quickly.”
Coronavirus latest: Follow all the latest information in our COVID-19 update story
How did Trump and Fauci fall out?
Anthony Fauci speaks as US President Donald Trump listens during a news conference in the Rose Garden.(Reuters: Al Drago)
Dr Fauci, who was once a star of the White House coronavirus briefings, has appeared less and less often in White House sightings and the President’s comments.
On Thursday local time, Mr Trump told a Fox News host that he hadn’t personally spoken with Dr Fauci since early June, and added that the doctor had “made a lot of mistakes”.
Over the weekend, a White House official leaked an internal memo containing a list of comments made by Dr Fauci with an aim of discrediting and damaging the doctor.
“Several White House officials are concerned about the number of times Dr Fauci has been wrong on things,” the memo said.
Stay up-to-date on the coronavirus outbreak
Has Fauci been consistently wrong?
Dr Fauci’s supporters say his advice about coronavirus has generally evolved with consensus among US scientists.
For example, he said in February that the public should not wear masks, but changed his stance by March.
The White House disdain for Dr Fauci reached a peak on Sunday local time when Mr Trump retweeted controversial comments from game show host Chuck Woolery claiming that “everyone is lying” about the pandemic to “keep the economy from coming back, which is about the election”.
That same day, Florida recorded the highest-ever daily caseload for a single US state.
Florida is one of several states, including Arizona, Texas and Georgia, seeing a spike in case numbers after an early end to lockdowns.
Other states, like California, have reimposed widespread restrictions.
US media has frequently connected Mr Trump’s controversial coronavirus response with his falling poll numbers. National aggregate numbers show him roughly nine points behind Democratic presidential nominee Joe Biden.
One poll suggests only 26 per cent of voters trust Mr Trump’s statements on coronavirus. That same poll put Dr Fauci’s trust levels at 67 per cent.
Read more about coronavirus:
Would Trump actually fire him?
For now, Mr Trump appears to be downplaying his tensions with Dr Fauci.(Reuters: Tom Brenner)
As US President, Mr Trump cannot directly fire Dr Fauci.
Technically he could order his political appointees to do so, but Dr Fauci could appeal through Congress, where the doctor enjoys solid bipartisan support.
On the one hand, there’s a long pattern of Trump bad-mouthing experts around him before giving them the axe. Just look at his former attorney-general, Jeff Sessions, the previous national security advisor John Bolton, or any one of his former chiefs of staff.
But on the other hand, Dr Fauci has spoken out against Mr Trump for as long as Mr Trump has contradicted the experts, which is more or less since the start of America’s infection.
In mid-March, Dr Fauci was conspicuously absent from a Trump briefing touting an unproven anti-malarial drug as a safe COVID-19 cure. #WhereIsFauci started trending on Twitter.
In late April, similar unexpected absences sent the US media into 24/7 Dr Fauci firing watch. The doctor remained in office.
For now, Mr Trump appears to be downplaying his tensions with Dr Fauci.
“I have a very good relationship with Dr Fauci. I’ve had for a long time, right from the beginning. I find him to be a very nice person,” Mr Trump said on Monday.
Meanwhile, US media report Dr Fauci has no plans to vacate his post, and all signs suggest the doctor is in it for the long haul. His post is critical to overseeing vaccine development.
In the absence of daily coronavirus task force briefings, Dr Fauci has done more to spread his message through media interviews and social media.
What you need to know about coronavirus: