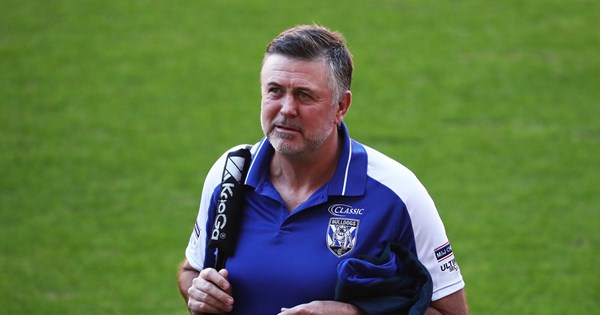 Dean Pay has coached his last game for the Bulldogs, with he and the club where he once won a premiership set to part ways on Tuesday morning.
Following the club’s 1-8 start to 2020, Pay is poised to call time on his tenure with an announcement set to be made in the next few hours.
Canterbury have made no official comment on Pay’s future, but it is understood he and the club are in the process of finalising the financial details of his exit from the final months of his contract.
It is understood he will effectively jump before being pushed with 10 games remaining this season, with the Bulldogs board expected to inform Pay that his contract would not be renewed at the end of the year.
Pay said after Saturday’s demoralising loss to Brisbane that it would “be good for everybody” if the board made a definitive on the 51-year-old former NSW and Australian forward’s future, with the impasse affecting efforts to land marquee signings.
The Bulldogs have won just one game from nine outings to sit outright last, with Pay’s winning record since taking charge of the battling club in 2018 from Des Hasler sitting at 32%.
Assistant coach Steve Georgallis is likely to fill in as Canterbury coach in an interim capacity until a deal is finalised with Pay’s full-time replacement.
Panthers assistant coach Trent Barrett.©NRL Photos
A host of potential successors have been linked to the club in recent days, with former Manly coach Trent Barrett leading the contenders.
Penrith officials have indicated they won’t stand in their assistant coach’s way should Barrett pursue a head coach role.
Pay’s time at Belmore comes to a close just as the club is recovering from the salary cap mess left from his Hasler’s tenure, which led to high-profile players David Klemmer, the Morris brothers Josh and Brett, Moses Mbye, Aaron Woods and Josh Reynolds all moving on during Pay’s first year at the club.
Former premiership-winning coach Phil Gould, who took the Bulldogs to the title in 1988, said Pay had not only stayed the course with the Bulldogs through their toughest days, but taken on a difficult role few else would have the stomach to handle.
“I know Dean really well,” Gould said on Channel Nine’s 100% Footy.
“He took the job out of a sense of loyalty to the club, because they were in a precarious situation and there wouldn’t have been too many other established coaches taking on what he did.
“And he’s stuck it out through loyalty to the club and for his love of the players.
“I think there will be a big announcement in the morning and Dean may well have coached his last game for the Bulldogs.”
Canterbury’s turbulent season hit another bump earlier on Monday when rookie centre Jake Averillo was stood down after he was inadvertently caught up in the recent COVID-19 spike.
Canterbury centre Jake Averillo.©Grant Trouville/NRL Photos
The parents of Averillo, who still lives at home, dined at the Crossroads hotel in Casula in south-western Sydney which has been identified as a cluster for cases of the virus.
In a busy day for the club, Corey Harawira-Naera and Jayden Okunbor had their deregistrations overturned by the NRL Appeals Committee and reduced to lengthy suspensions and fines.
They had been stood down since April after they were found to have breached the code of conduct due to their involvement in a pre-season incident in Port Macquarie involving local high schoolgirls.