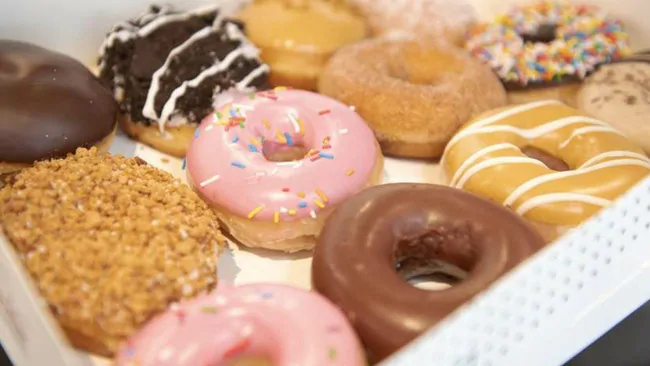 NSW Police has slammed Krispy Kreme for giving away hundreds of thousands of doughnuts during the pandemic, saying the crowd-attracting promotion was nonsensical and defies logic. Krispy Kreme Australia gave away 420,000 free doughnuts on Monday to anyone who missed out on their birthday due to coronavirus restrictions.
RELATED: Krispy Kreme gives away free doughnuts
RELATED: Follow our full coronavirus coverage
Australians whose birthday fell between March 13 and July 13 could go into participating Krispy Kreme stores to redeem the offer of a dozen free Original Glazed.
But the giveaway resulted in long traffic queues and massive lines of people standing outside multiple stores in close proximity.
The Public Order and Riot Squad was also called in to assist with public health compliance.
Operation Coronavirus Commander, Acting Assistant Commissioner Tony Cooke, condemned the promotion.
“This is nonsensical and defies logic,” he said in a statement to news.com.au.
“We have people in NSW who have lost jobs, people who have missed the opportunity to farewell their loved ones at funerals, and of course, people who have lost their lives due to COVID-19.
“Promotions like this do nothing to assist in maintaining social distancing which is vital to stopping the spread of the virus.”
In several stores, the chain stopped accepting customers due to reaching full capacity.
It was also reported there were delays on Mulgoa Road at the Penrith store.
Due to restrictions in Victoria, the doughnuts were only redeemable at the drive-through of Krispy Kreme stores in Fountain Gate, Fawkner and Bulleen.
Several customers took to Facebook to complain about the lengthy queues and the timing of the promotion.
Derek Marshall said: “You should be fined. Saw the crowds. No social distancing at all.”
“I think it’s a great idea what you did, but under the current circumstances in Victoria I think it was inappropriate,” wrote Tracey Johnston. “You have encouraged people to unnecessarily leave home for a free box of doughnuts. I think this promotion would have been better outside of lockdown rules.”
RELATED: Signs NSW has lost control of virus
RELATED: Warning of Stage 4 restrictions in Victoria
Nancy Yassi said: “I understand this is a kind gesture, but I cannot stress how insensitive it is to run this promotion in a hotspot in Victoria, and force police to close the area due to the influx of people.”
Krispy Kreme Australia chief executive Andrew McGuigan said the offer was being made to mark the doughnut chain’s 83rd birthday.
“From toilet paper presents to zoom parties to less-than-impressive cakes, there’s no doubt birthday celebrations have been lacking these last few months,” he said. “So, we’ve decided to share some joy with all those who missed out, with our biggest doughnut giveaway to date.”