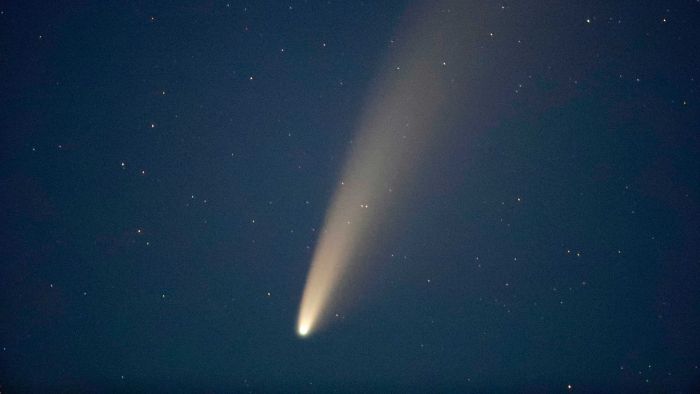 Stargazers and early risers in the northern hemisphere have been treated to spectacular and incredibly rare views of passing Comet Neowise, as it leaves a bright trail in the early morning sky.

The comet, officially called C/2020 F3, is making a once-in-many-lifetimes appearance, as it won’t pass Earth again for another 6,800 years, according to the International Dark-Sky Association (IDA).
Astronomers predict the comet will remain visible to the naked eye until July 16, assuming the comet holds together and doesn’t disintegrate.
Sadly, Australian stargazers will be out of luck trying to find the comet in the night sky, as will the rest of the southern hemisphere.
NASA released an image of Neowise photographed from the International Space Station on July 5, showing the comet trailing spectacularly above Earth’s atmosphere.
NASA released this image of Comet Neowise (left) seen in the eastern horizon above Earth from the International Space Station.(AP/NASA)
“This very close passage by the sun is cooking the comet’s outermost layers, causing gas and dust to erupt off the icy surface and creating a large tail of debris,” NASA said last week.
“And yet the comet has managed to survive this intense roasting.”
Comet Neowise soars in the horizon of the early morning sky above the state of Colorado.(AP/Conrad Earnest)
Neowise was named after an imaging project from the California Institute of Technology (CalTech) that uses an infrared satelite called WISE to detect heat signatures from objects that orbit the sun.
IDA says the last comet that was easily visible to the naked eye was Lovejoy, in 2011, and before that was Hale-Bopp considered the last of the “great comets” which appeared brightly to northern hemisphere observers in 1997.
St Mark’s Tower, a 17th century coastal fortification near the village of Bahar ic-Caghaq in Malta, bears witness to Neowise.(Reuters: Darrin Zammit Lupi)
Viewers in the northern hemisphere have been advised to look out for Neowise an hour before sunrise.
The comet will be at its closest to Earth on July 23, but will likely only be visible via telescope or binoculars.
Comet Neowise seen before sunrise over Balatonmariafurdo in Hungary.(AP/MTI: Gyorgy Varga)