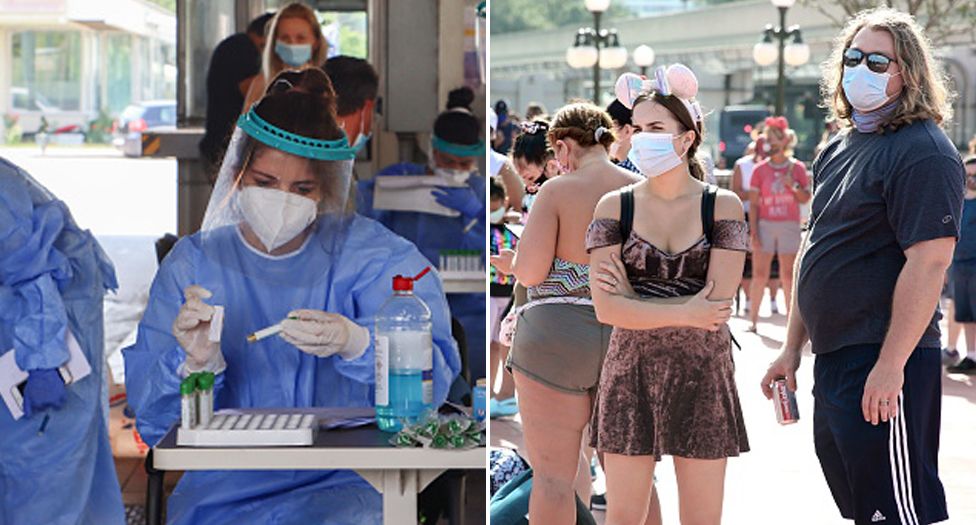 The World Health Organisation has reported a record single day increase in global coronavirus cases, with the total rising by 230,370 in just 24 hours.
The biggest increases were from the United States, Brazil, India and South Africa, according to a daily report on Sunday.
The previous WHO record for new cases was 228,102 on July 10.
Deaths remained steady at about 5000 a day.
Global coronavirus cases were approaching 13 million on Sunday, according to a Reuters tally, marking another milestone in the spread of the disease that has killed more than 565,000 people in seven months.
Disney World reopens despite Floridas record
In the US, Florida reported the largest single-day increase in coronavirus cases in any part of the country since the beginning of the pandemic, with 15,000 infections.
But that hasnt stopped Disney World in Orlando from reopening its doors on Saturday.
People queue to get into Disney World. Source: Getty Images
More
Walt Disney Co welcomed a limited number of guests to its two most popular parks at the sprawling Orlando complex, the world’s most-visited theme park resort, with a host of safety measures designed to reassure visitors and reduce the chances of catching the sometimes deadly virus.
Executives felt confident they had a responsible plan for reopening in phases during the pandemic, Josh D’Amaro, chairman of Disney’s parks, experiences and products division, said.
“This is the new world that we’re operating in, and I don’t see that changing anytime soon,” Mr D’Amaro said in an interview after he greeted guests and workers at the park.
Disney’s reopening of parks in Asia helped provide assurance about moving ahead in Florida, he added. Disneyland Shanghai opened in May, followed by the Disneyland parks in Hong Kong and Tokyo in June and July, respectively.
“I feel really good about our environment,” Mr D’Amaro said. “We’re taking this seriously.”
Florida didn’t just break the record for reported cases. It also shattered the mark for cases per million population. New York, at peak, hit 595. Today, Florida reported 712 cases per million. Arkansas also entered the 500+ tier, where we’ve only seen FL, AZ, and LA. pic.twitter.com/KeQmHMA9as
The COVID Tracking Project (@COVID19Tracking) July 12, 2020
The company did not say how many people entered Disney World on Saturday but Mr D’Amaro said he saw “really good demand” for reservations in the short term and into 2021.
At the Magic Kingdom and Animal Kingdom, the two parks that reopened Saturday, guests and employees wore face masks, underwent temperature screenings and were told to social distance everywhere from streets to rides. Plexiglass separated rows in lines, and ground markings indicated where people should stand.
Epcot and Disney’s Hollywood Studios, the two other Walt Disney World parks, are scheduled to reopen on Wednesday, local time.
The US as a whole has registered about 60,000 new cases a day for the last four days in a row.
Cases surge across the globe
India registered a record surge of 28,637 cases reported in the past 24 hours.
Local authorities announced a week-long lockdown beginning on Tuesday in the key southern technology hub of Bangalore, where the offices of top tech companies like Microsoft, Apple and Amazon are located.
Cases jumped from 600,000 to more than 800,000 in nine days. People are packing Indias public hospitals as many are unable to afford private ones that generally uphold higher standards of care.
Crews outside Greenacres Hospital in Port Elizabeth, South Africa. Source: Getty Images
More
Indian Prime Minister Narendra Modi urged top officials to improve infection testing and tracking, especially in states with high positivity rates.
South Africa has reported more than 10,000 new daily cases for several days in a row, including 13,497 new infections announced on Saturday night, local time.
Romania announced a record-high number of infections on Saturday, with 698, while 456 new cases were reported on Sunday.
Travellers are tested at Greek Bulgarian borders of Promahonas Kulata as they enter Greece for holidays. Source: Getty Images
More
Bulgarian authorities reintroduced restrictions lifted a few weeks ago because of a new surge in cases, with indoor facilities at nightclubs and discos ordered to close and weddings and baptisms limited to 30 people while sporting events can be held only without spectators.
Albania has recorded a significant increase in infections since mid-May, when it eased lockdown measures.
The Balkan country reported 93 new cases, more than twice as many as the highest daily figures in March and April, and the health ministry called the situation at the main infectious disease hospital “grave”.
with Reuters and The Associated Press
Do you have a story tip? Email: [email protected]
You can also follow us on Facebook, Instagram and Twitter and download the Yahoo News app from the App Store or Google Play.