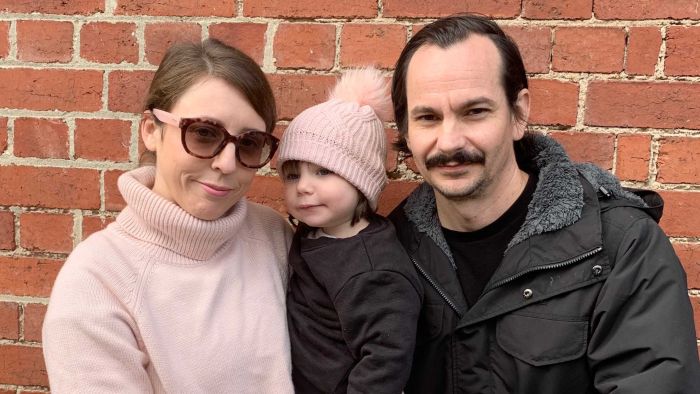 Travellers due to arrive in Western Australia from Victoria say they have been left stranded after their permission to enter the state was cancelled at the last minute due to tightened restrictions.
Key points:

Last week the WA Government announced it would stop anyone who had been in Victoria for the past 14 days from entering the state, unless they were on a very short list of exempt persons.
Hundreds of people flew into Perth from Melbourne last week, but many remain in Victoria as its coronavirus crisis continues to grow.
Chris Pierucci moved to Melbourne with his wife and two-year-old daughter in March to start a new job but lost it shortly afterwards due to coronavirus, and the young family decided to move home to WA several weeks ago, before the latest outbreak.
He said they had their exemption to travel cancelled last Friday and were told to reapply but were yet to hear anything.
“We actually moved out of our house last Wednesday. A truck rolled up, took all our stuff and is heading to Perth now,” he told ABC Radio Perth.
“The very next day the new restrictions came out, we had already moved out and are in an Airbnb now, and just not sure what the next steps will be.”
Coronavirus live: Follow all the latest information in our live blog.
Mr Pierucci said the process was made difficult because a whole host of arrangements had to be made in order to apply for an exemption.
“You need to provide flight info, a travel date, where you’re going to do your quarantine in Perth you can’t really organise all these things without moving your stuff out and getting ready to leave Melbourne,” he said.
“It’s almost like a chicken and egg situation we’ve found ourselves in.”
Mr Pierucci said he would like some more clarity provided by the WA Government and police.
“I’ve got a job ready to go, I’ve got a house that all our stuff is heading to as we speak I’m not trying to portray a sob story like we’re out on the streets, because we’ll be okay regardless of what happens,” he said.
Mother and daughter in tearful Perth reunion after flight from Melbourne
“But we’ve got our two-and-a-half-year-old daughter with us and we would love to get her home and just have the support of our family and friends, get back to some employment and get back to a bit of normality I suppose.”
Nurse stranded after second bid rejected
Victorian nurse Jennifer Jennings sold her house and shipped her car to WA so she could move to the state to train future nurses.
Nurse Jennifer Jennings says she doesn’t understand why she can’t enter WA under the new rules.(Supplied: Jennifer Jennings)
She had been due to fly into Perth today, but that flight departed without her onboard as her original exemption was cancelled and her new application was denied with little explanation as to why.
Ms Jennings said by the time the new orders were handed down, she had already sold her family home.
“You have to be so very concise I had originally done that on the June 26, and I only got notified on Friday night at 9:30pm that I had to delete my pass and reapply with the new restrictions,” she told ABC Radio Perth.
“My car was picked up on Friday and it’s on its way to Perth, I’ve paid for my accommodation, I’ve paid for my apartment and I’m supposed to start my job on the 27th of July and now can’t do anything.
“I’m kind of stuck, and I know there’s a lot of other people in this situation.”
Ms Jennings said she understood the need for tightened restrictions but did not understand why she could not be allowed in under those revised rules.
“I had everything in place ready to go I’m not asking to come for a holiday, I’m coming to do a job,” she said.
Select list of people allowed in
The WA Government has provided some clarity on who will and will not be considered for an exemption to enter the state under the tightened restrictions, following its announcement last week.
Hundreds of people flew into Perth from Melbourne last week as Victoria’s COVID-19 crisis grew.(ABC News: James Carmody)
According to the new regime in WA, there are only a select few categories of people who should be allowed into the state from Victoria, including:

Being originally from WA not an excuse
People who are originally from WA but have been living in Victoria are not likely to make the cut.
Police said someone did not qualify for an exemption if they had lost their job in Melbourne and wanted to return to Perth to be with the rest of their family.
Anyone who flies into WA without an exemption has been warned they are likely to be sent back.(ABC News: Emily Piesse)
That is unless they can prove they will suffer undue hardship if they are denied entry or there are compassionate grounds on which police should grant an exemption.
Police might also grant an exemption for someone on compassionate grounds under certain circumstances, such as someone who is in Victoria caring for a sick relative but wanted to return.
If that care needs to be provided on an ongoing basis, an exemption to travel back and forward may also be considered.
Almost no FIFO exemptions
While fly-in, fly-out workers previously made up many of the exempt Victorians being allowed into WA, that is no longer the case, with only a select few specialist workers likely to be exempt now.
Exemptions previously granted to FIFO workers from Victoria are unlikely to be forthcoming now.(ABC News: James Carmody)
Affected WA companies, mainly in the mining industry, have been advised to source their interstate workforces from outside of Victoria.
The new rules apply for anyone who has been in Victoria in the past 14 days, so travelling via another state will not make it easier to be granted an exemption.
Police have said that anyone unsure if they could travel to WA should apply for an exemption via the WA Government’s ‘G2G’ app or website, which it uses to process applications.
Anyone who flies into WA without a pre-approved exemption is warned they are likely to be turned around at Perth Airport and put on a flight back to where they originated.
Police issue direction on safe sneezing
For those who are allowed to enter WA from Victoria, most will be directed to undergo 14 days of self-isolation, at home or at their chosen accommodation.
All arrivals from Victoria must go to a COVID clinic on their 11th day in WA to be tested for the virus.(ABC News: James Carmody)
During their first two weeks in the state, people are also required follow a set of specific directions issued by Police Commissioner Chris Dawson. These include:

All arrivals from Victoria are also required to present to a COVID clinic on their 11th day in WA to be tested for the virus, and failure to do so can be met by a $5,000 fine.
Police Minister Michelle Roberts said WA was taking a no-nonsense approach to testing and it had proved effective with four people who initially refused to be tested in the past week.
Police Minister Michelle Roberts says she has “every confidence” in the system WA has in place.(ABC News: James Carmody)
“If we say you’re having a test, you’re having a test,” she said.
“If you don’t, the Commissioner of Police issues a direction, specifically to you, requiring you by law to have that test done, and the next people present would be someone to serve that direction and someone to do that test”
“Now, in light of the advice that’s the direction they would get, those people have then complied.”
Victorian arrivals can hail taxis at airport
In order to get from the airport to their home or accommodation to begin self-isolating, arrivals from Victoria are permitted to use a taxi or rideshare service.
They are also allowed to use those modes of transport in order to attend a COVID clinic to be tested for the virus.
Drivers at Perth Airport have said they were concerned they might catch the virus from an infected passenger and then spread it to their families and the wider WA community.
Taxi drivers have been told to avoid handling the luggage of passengers arriving from Victoria.(ABC News: James Carmody)
But Ms Roberts denied Victorian arrivals sharing a confined car space with taxi and rideshare drivers represented a weakness in the quarantine chain.
“I have every confidence in the system we’ve put in place,” she said.
“I’ve got great confidence in Chris Dawson, our Police Commissioner, as the State Emergency Coordinator, I do have faith in the types of decisions that both he and