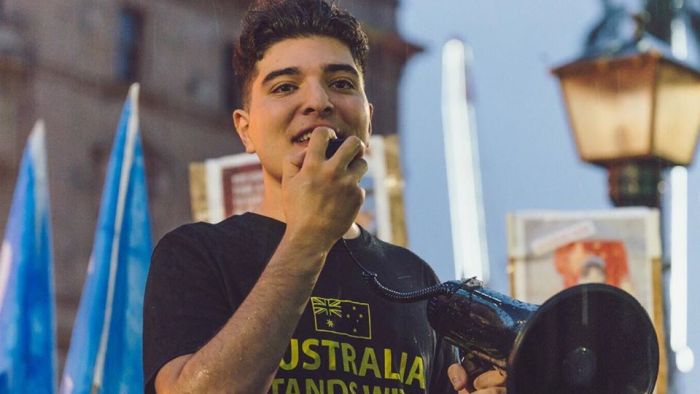 Suspended University of Queensland (UQ) student Drew Pavlou is vowing to maintain his fight against suspension, despite a UQ committee’s latest decision to uphold disciplinary measures against him.

Drew Pavlou, 21, received a letter from the university’s senate discipline appeals committee on Monday afternoon advising him of its decision to uphold his suspension for the duration of semester two this year.
He was initially suspended for two years by the university’s disciplinary board when it alleged he had breached UQ’s code of conduct.
The appeals committee found Mr Pavlou guilty on five misconduct allegations, but not guilty on 13 other allegations.
A letter from the UQ appeals committee sent to Mr Pavlou said he had the right to appeal against the decision to the Queensland Ombudsman.
Mr Pavlou joined a rally in support of Hong Kong outside the Chinese consulate in Brisbane in May.(AAP: Dan Peled)
“It is a witch-hunt and a fake public-relations move by the university,” Mr Pavlou told the ABC.
“90 per cent of the charges against me have been thrown out.”
Mr Pavlou drew widespread attention after he organised anti-Chinese Government protests on campus, one of which ended violently.
The philosophy student is appealing against his suspension, which also includes a requirement he complete 25 hours of campus service.
“The decision removes me from UQ’s senate where I was democratically elected to represent students,” Mr Pavlou said.
“I will seek an injunction in the Supreme Court against this.”
Last month, Mr Pavlou started Supreme Court proceedings to sue the university, its chancellor and vice-chancellor, seeking $3.5 million in damages for breach of contract and defamation.