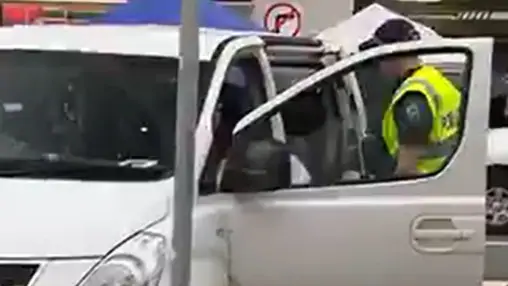 A busload of Victorians have been blasted as selfish after they copped a $24,000 fine over an audacious attempt to cross the Queensland border illegally.The group of six is accused of lying on their border declaration forms to get into the Sunshine State in a mini-van. They have stunningly admitted they knew “100 per cent” they were breaking the rules.
Police say the passengers hopped out and tried crossing the border on foot but officers spotted them.
When the officers checked their phones, location settings and photos revealed they’d been in Victoria within the past 14 days. They were fined $4000 each bringing the total cost of the road trip to $24,000.
This morning Queensland Premier Annastacia Palaszczuk slammed the Victorians, saying their attempt to cross the border was “not on”.
“Unfortunately, Victorians cannot come to Queensland,” she said. “We saw some people trying to get in, in a van, it’s not on. And you’ll be caught. And you’ll be fined. So those young people now have hefty fines they now have to pay.”
Seven News spoke to some of the Victorians, who seem to have taken the experience on the chin.
“100 per cent we definitely knew we were breaking the rules,” one of the fined travellers said. “Money doesn’t run the world it’s all good,” another added.
However, Queensland Police Deputy Commissioner Steve Gollschewski said they were “selfish”.
“They think they can gain the system and get around it by sneaking across or filling a false declaration,” he told Today.
“That will cost them a lot of money. The worst thing is that they’re putting others at risk. How do they know whether they have caught (coronavirus) or not? The issue for us is, of course, keeping COVID out of Queensland. This is what this is about.”
Queensland opened its borders to other states on Friday. However, Victoria is still excluded.
Meanwhile police in Victoria, police have handed out 119 fines to people breaching coronavirus directions in the last 24 hours.
They have given some examples.
Nine people gathered for a 30th birthday party at a private residence in Caulfield were fined.
They said there were “numerous incidents where people have been stopped on their way to visit friends or have been hosting gatherings at private properties”.
There have also been 51 infringement notes issued at vehicle checkpoints.
In the last 24 hours, there were 17,133 vehicles stopped at checkpoints on main arterial roads and there were 1086 spot checks on people at homes, business and public places across the state.