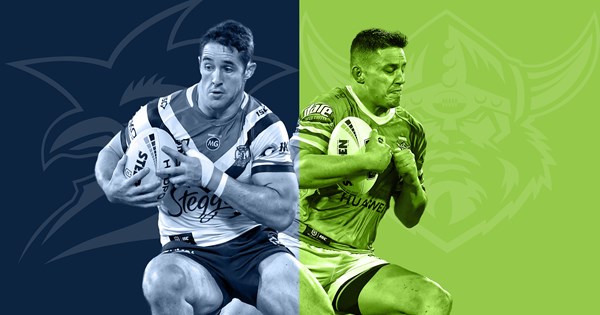 The Roosters looked like they were in for a tough night against the Cowboys last week before taking control with a devastating 30-minute scoring blitz en route to a 42-16 win.
That they did it without Brett Morris – one of the competition’s form players – only made their performance all the more impressive.
His replacement Matt Ikuvalu filled the void in no uncertain terms, becoming the first Roosters player in 65 years to score five tries. Ryan Hall struggled to make an impact again and it’ll be interesting to see who will make way for Morris if he’s fit to return.
The injury-hit Raiders went down fighting last week against Melbourne and will have to lift again in Thursday’s grand final re-match.
Team news
Roosters: The club has pencilled in winger Brett Morris to return from groin tightness. Matt Ikuvalu entered the record books with five tries last week but hes reportedly set to make way for Morris with Ryan Hall to remain on the other flank. Hooker Jake Friend is undergoing standard HIA protocols after being concussed. If he is unable to play, coach Trent Robinson has indicated that youngster Freddy Lussick will get a chance while Lachlan Lam did a solid job at dummy-half against the Cowboys. Captain Boyd Cordner is expected to return after being rested following a head knock. Lock Isaac Liu could also return from a broken rib.
Raiders: Josh Hodgson (knee) and Bailey Simonsson (shoulder) suffered season-ending injuries against Melbourne. Siliva Havili is set to replace Hodgson at hooker while Tom Starling could come on to the bench to give him a spell. Jordan Rapana is likely to start on the wing for Simonsson, which could open the door for outside back Curtis Scott to return on the interchange.
Key match-up
Luke Keary v Jack Wighton. Roosters five-eighth Keary continues to cement his standing as one of the game’s premier playmakers, racking up 10 try assists, seven line-break assists and four tries over the first nine rounds. When Wighton plays well the Raiders usually play well, and he would know that better than anyone. If he can out-point Keary and make the Roosters work overtime in defence with a strong kicking and passing game, the Raiders could spring an upset.
Stat Attack
Roosters halfback Kyle Flanagan is playing catch-me-if-you-can with the rest of the field in the NRL point-scoring race. Flanagan has piled up 102 points – 30 more than his closest rival. On the downside, the 21-year-old has a league-high 21 ineffective tackles to his name. The Roosters beat the Raiders in three meetings last year – 30-24 in round nine, 22-18 in round 21 and 14-8 in the grand final.