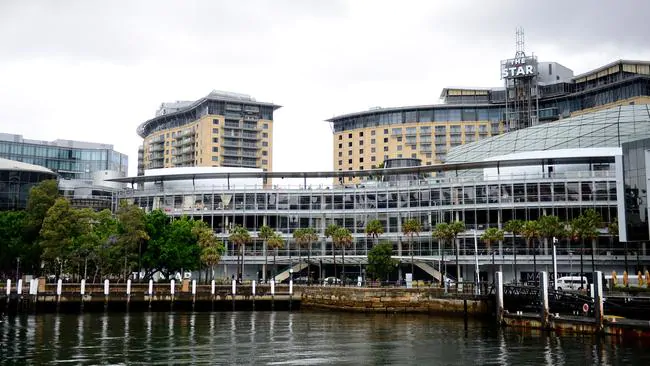 Sydneys Star Casino has confirmed a patron who visited the complex on Saturday, July 4, has tested positive for COVID-19. In a statement lodged to the Australian Stock Exchange, the group said it had been informed by New South Wales health authorities a patron who visited the casino that night had returned a positive reading for the infectious disease.
The Star noted the patron had been on the premise from between about 7.30pm and 10.30pm.
“The Star is working closely with NSW Health to respond to this information, including the conduct of contact tracing which includes staff members,” the company said.
The casino reopened on June 1 and was operating on a restricted timetable.
Star Entertainment shares listed on the ASX took a nosedive after the announcement, amid fears a lockdown of the surrounding suburb of Pyrmont could be on the horizon.
As of 1.45pm on Monday, Star Entertainment shares were flat at $2.70 per share, losing its 7.4 per cent rally earlier in the day.
On July 1, the Star Sydney was able to host up to 5000 patrons at any one time within the casino complex.
As of 2pm on Monday, the Star remained open.
An NCA NewsWire employee observed there was no active cleaning occurring on the gaming floor, however sections were closed off to the public.
The news comes as NSW recorded 14 new cases of coronavirus on Monday.
Four were returned travellers; two were NSW residents who acquired the infection in Victoria. Both have been in self-isolation since returning and have no close contacts.
The other eight cases include five who attended the Crossroads Hotel in Casula, and three are contacts of cases who were at the hotel.
Meanwhile, a second hotel in Sydney’s southwest has been forced to close after a patron tested positive for COVID-19.
NSW Health confirmed The Picton Hotel had now closed for deep cleaning after a person attended the pub on three separate occasions to play the pokies while infectious.
It is understood the infectious person sat in the gaming room on July 4, 9 and 10, according to the health department.
A fitness centre nearby has also closed for a deep clean after a confirmed case, linked to The Crossroads Hotel, attended the gym.
Planet Fitness in Casula, just a kilometre away from The Crossroads Hotel, took to Facebook to confirm the news and urged anyone who may have attended the gym — particularly between 9am and 11am on Thursday and 4pm and 6pm on Friday — to get tested.
“The member has not been at the club since Friday 10 July, and is in quarantine,” the gym’s letter to members said.
“We are taking the precautionary measures of closing this location … and to ensure the uncompromised safety of our members.”