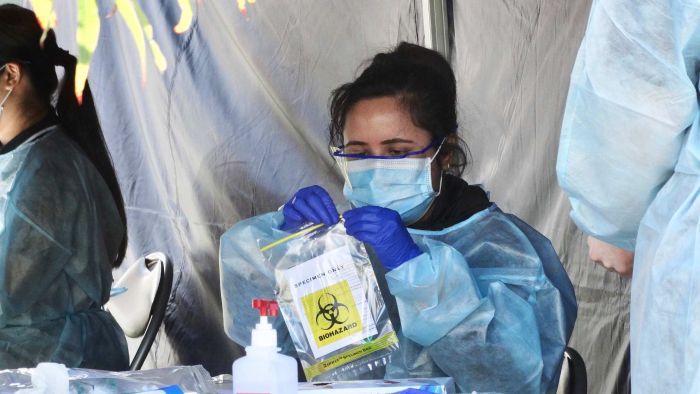 Health officials and epidemiologists are hoping Melbourne’s coronavirus lockdown could start to have an impact on case numbers within days, but have warned the measures will only be successful if people follow restrictions.
Key points:

Victoria has now had six days of triple-digit case increases every day, including a record 288 infections announced on Friday and 216 on Saturday.
Stage three restrictions came into force on Thursday, covering about 5 million people in metropolitan Melbourne and the Mitchell Shire for six weeks.
On Saturday, Chief Health Officer Brett Sutton said he was hoping the new restrictions would have an effect “from now”.
He said data showed movement across Melbourne was slowing even before the restrictions officially came into effect, which could have an impact as well.
“So it would be great if that plateauing was occurring now, but really with respect to the stage three restrictions that we’ve got across metro Melbourne and Mitchell Shire, it’s in the next three to five days that it should be really having an effect.”
Coronavirus live news: Follow all the latest information in our blog.
But Professor Sutton had earlier warned the peak could be yet to come.
The state currently has about 100 active outbreaks and thousands more close contacts that health officials were trying to contact and trace.
Under the new restrictions, people in the lockdown zones can only leave their house for four reasons: shopping for essential supplies, medical care or caregiving, work or education and exercise.
“We know lockdowns work, so I have no reason to believe it’s not going to drive numbers down,” University of Melbourne epidemiologist Tony Blakely said.
However, Professor Blakely said if people “behave badly” and ignore the restrictions, “that would be a problem”.
Playgrounds and public gym equipment are off-limits again under the new restrictions.(ABC News: Patrick Rocca)
Possibility for ‘two epidemic curves’ in hotspot zones and rest of Melbourne
The incubation period for the virus is usually about five to seven days, and there is often a wait time of two to three days for people to have their results back.
This means the numbers announced on one day are likely more representative of how the virus was presenting more than a week ago.
Melbourne’s lockdown explained
Under the new restrictions, police will set up roadblocks outside the city, gyms will be closed again and people will be banned from staying in their holiday homes in regional Victoria.
Read more
Pre-symptomatic and asymptomatic people could have much more variation in the time between acquiring the virus and returning a positive test, Professor Blakely said.
The first lockdowns of 10 problem suburbs came into effect just under a fortnight ago.
Professor Blakely said for those areas, the stay-at-home measures should already be starting to have an impact.
“For the rest of us we’d expect the cases to keep going up for another five days, and then start to turn,” he said.
“So there’s actually two epidemic curves happening under the surface here.”
The Government does not provide daily postcode breakdowns of where cases were detected, instead providing local government area data.
Read more about coronavirus:
‘Mopping up’ of contact tracing work could see numbers stay high longer
The director of Deakin Epidemiology, Catherine Bennett, said she was looking at a timeframe of about two weeks before the full effects of the suppression strategy became apparent.
She said the 100 outbreaks currently being investigated by Victoria’s contact tracing team might generate more recorded positive cases.
“It’s worth bearing in mind that there’s still more mopping up, if you like, work to be done through the contact tracing to identify people who won’t yet have been tested,” Professor Bennett said.
“So that might bump the numbers up, or keep them up for a bit longer than we’d otherwise like to see and cloud or cover over the true impacts of the suppression that we’re hoping to see.”
Victoria COVID-19 snapshot

Updated Saturday, July 11
Latest information from the Victorian Government
But she said the infections linked to known outbreaks were less of a concern than those which had to be investigated.
“If you look at someone who is positive and who is a known contact, then you go to their circle,” she said.
“But if you have to look 360 degrees around a new case that you can’t immediately link, then that is a concern.
“Because there might be quite a few people and each of those people might have their own contacts.”
But she said the public health team did often eventually link people back to known larger clusters the difficulty of the job depends on how many links there are between the cluster and the new case.
She said it would be normal to see some more “bumps” during the six-week lockdown as contact tracers found more people who needed testing.
‘We can’t be guaranteed’ of turnaround, Sutton warns
Suspected cases of community transmission are at a much higher rate than the last peak of the virus in Victoria, when many of the new infections were in overseas travellers.
It is this community transmission that has health officials most worried.
Unlike when the first round of restrictions came into effect in March, testing is targeted across the community and is happening at much higher rates, which Professor Bennett said was helping.
All people in Melbourne and the Mitchell Shire are now encouraged to wear masks when distancing is not possible.(ABC News: Chris Le Page, file photo)
She said the new guidance on masks asking people to wear a reusable mask if they are not able to physically distance could be “another layer” in protecting against community transmission.
During Saturday’s press conference, Professor Sutton warned although the restrictions “substantially” limit the number of interactions people have, there was still the “significant pressure” of infection in the community and challenges were posed by the fact people still had to move around for work.
“We know there will be transmission because of the work people have to do and so we can’t be guaranteed that will turn around in three to five days,” he said.
“We need to work with the masks, the workplaces, make sure people are doing the right things in terms of excluding themselves when unwell and getting tested as part of that as well.
“It won’t be just staying at home except for essential reasons.”
What you need to know about coronavirus: