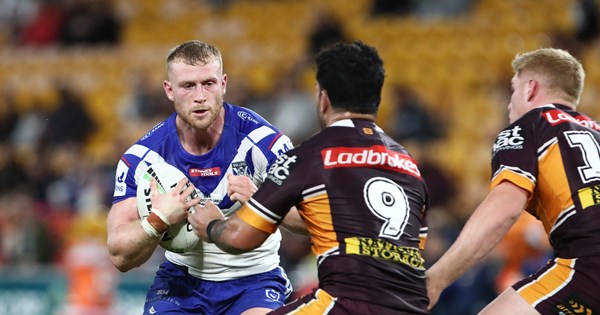 English import Luke Thompson wants to taste premiership success at the Bulldogs and his fiery debut against the Broncos suggests he will fit right in with the “Dogs of War” traditions at the proud club.
The 25-year-old Test forward took on Tevita Pangai jnr in an old-fashioned nose-to-nose confrontation in Canterburys 26-8 loss at Suncorp Stadium on Saturday night.
The duel started when the visiting lock ran straight over Pangai early and escalated when he was put on report for a shoulder charge on the Tongan international but was subsequently cleared by the match review committee.
A war of words erupted between the duo as half-time approached.
“I have watched him before. He is a good player and that is the way he likes to play the game, Thompson said.
“He likes to get under your skin and carry on. He wound me up so I gave him a little clip but there was nothing in it. I like them battles in the middle.”
Thompson won two Super League titles in 2014 and 2019 with St Helens and had  a win rate of 70% in his 158 games for the Saints.
Thompson on report for shoulder charge
While Thompson wants to emulate English forwards who have been a success in the NRL such as Adrian Morley and Sam Burgess, he also wants to be part of a Bulldogs team that wins titles like great forwards of the past such as Peter Kelly, Sonny Bill Williams and coach Dean Pay himself.
“I heard a lot about the history at the club and how they had a lot of success in the past,” he said.
“They are a real big club in Sydney and a club that demands success. I want to be part of that.
Luke Thompson and Tevita Pangai jnr lock horns.©Jason O’Brien/NRL Photos
“To be honest, I always followed the Bulldogs as a kid.
“When I spoke to people at the club like