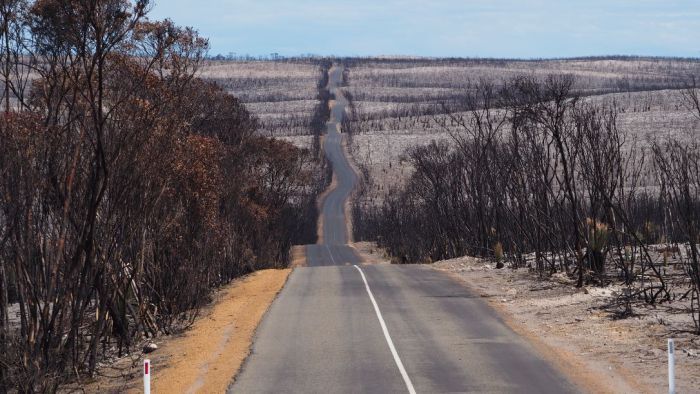 South Australian firefighters will be equipped with 25 new trucks and improved communications technology ahead of the upcoming fire season, with the State Government vowing to act on the recommendations of an independent review.
Key points:

Premier Steven Marshall has promised more than $20 million to boost firefighting capacity in the wake of last year’s devastating bushfires.
In addition to the fast-tracked new trucks, existing vehicles will be fitted with protection systems including tracking devices.
Mr Marshall said the action plan would ensure the state was as prepared as possible for future fires.
“These were devastating bushfires for our state,” he said.
“We had the loss of life, property, livestock and wildlife in South Australia and it is absolutely incumbent upon every person in the state to understand what we can do ahead of the next bushfire season.”
The announcement came after former Australian Federal Police Commissioner Mick Keelty completed an independent review into last year’s bushfire season.
Mr Keelty’s report, which makes 15 recommendations and is the basis for the plan, was handed to the Government two weeks ago.
Former AFP commissioner Mick Keelty carried out the review into last year’s devastating fire season in SA.(ABC News)
It was commissioned after bushfires tore through properties and scrubland in parts of the Adelaide Hills, Kangaroo Island and Yorke Peninsula over the summer months.
Emergency Services Minister Corey Wingard said the funding would go towards equipment and technology that would help save lives in future fires.
“These are really important tools that were identified in this review that our emergency services need to keep them safe and keep South Australians safe,” he said.
‘It’s important we get it right’
Country Fire Service chief officer Mark Jones said the funding would go towards practical measures to assist emergency services and communities.
He said it was unrealistic to install GPS devices in the service’s fleet of 1000 vehicles before next summer, and it was important to identify an effective system first.
“It’s more important that we get it right, that we identify a good system,” he said.
“One of the challenges we have with South Australia’s geography is that it needs a number of systems to act effectively.
“What we need is a system which will cover the whole of the state.”
CFS chief officer Mark Jones says previous bushfire reviews have not been acted upon.(ABC News)
Mr Jones the service would also invest in better social-media-monitoring capabilities.
He said the report found emergency services performed “remarkably” during the season and there was an unprecedented level of cooperation between services.
Government ‘slow to act’ on other reports
Mr Jones said it should also be investigated why previous bushfire reviews have not been acted upon.
“The report also identifies the fact that a number of previous actions and recommendations were not enacted, possibly due to funding or for other reasons,” he said.
“I think the first thing to do is have a look and identify why, and what needs to be done, urgently.”
It is expected this year’s bushfire season will begin in early-to-mid November.(ABC News: Lincoln Rothall)
Opposition emergency services spokesman Lee Odenwalder agreed action should have been taken faster.
“What we have to remember is Corey Wingard has had these reports sitting on his shelf for two and a half years and he hasn’t acted until today,” he said.
Mr Odenwalder added the Government had been slow to share the report with relevant authorities.
“The first responder representatives on the SAFECOM (South Australian Fire and Emergency Services Commission) board have been telling me that they want to see this report so that they can prepare their members for what it contains,” he said.
It is expected this year’s bushfire season will begin in early-to-mid November.