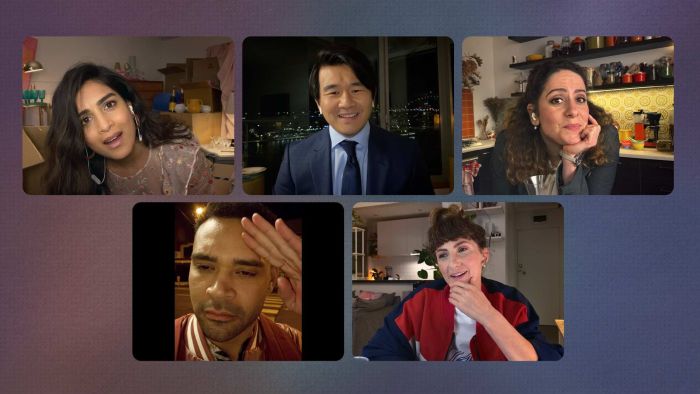 “Could you go on mute, please?”
I’m on the set of Retrograde, a new six-part dramedy from the ABC. Actually, scratch that, I’m not on the set. Like seemingly everyone else on the planet, I’m in a kind of purgatory between real life and simulation: the Zoom call.
While actors test lines and crew members in masks and gloves adjust camera set-ups, I’m hovering in the virtual background in an attempt to figure out just how a TV show about life under lockdown gets made while life is under lockdown.
And because this is a work-related video call in 2020, the rules are that at least somebody has to tell somebody else to please mute their mic.
As one actor finishes breakfast and another deals momentarily with “dog duty” they are working from home, after all it’s time to begin shooting one of the few television shows the coronavirus pandemic has not knocked out of production.
Retrograde has come together quickly
As the lockdown began in Brisbane in March, Meg O’Connell helped organise a virtual bar with a bunch of friends. About 30 came and went over the course of the first night.
A TV producer who worked on last year’s innovative mobile-first comedy Content, O’Connell knew this was the solid foundation for a story about young people navigating a strange new socially distanced world.
“I got a call from Meg after I had spent a couple of nights in the bar doing trivia or whatever,” says producer Jackson Lapsley Scott, who also worked on Content.
“She’s like, ‘Hey, we want to make a show out of the bar, can you figure out how it works?'”
Read more about coronavirus:
Within a week it was pitched to Que Minh Luu, at the time an executive producer at ABC TV, who had also worked on Content.
She loved the idea. From that point, it was a race to get it to screens while the experience of lockdown felt current.
“It’s something between a Zoom call, which we are all familiar with, and a live sports event in the way that it is shot,” says O’Connell, the show’s co-creator and writer.
“It’s a multi-cam studio sitcom but all the cameras are remote and director and the actors are all in different suburbs but relaying to each other as though they are on the same set.”
Film and TV producers around the world are trying to figure out how to produce content demand for which is high right now while keeping everyone safe.
While shows like Parks and Recreation have done one-off iso-specials, and Neighbours has led the way in filming safely on set, Retrograde becomes possibly the first scripted TV series to air that has the reality of lockdown baked into its premise.
Becoming grounded during a pandemic
In the first episode, Maddie (Pallavi Sharda) is on a video chat with her close friends while packing up her room. At 32, she is preparing to move to Seoul to take up a new job.
Of course, that plan very quickly blows up. She is now not just homeless and unemployed but like many of us beginning to ask larger questions about her life.
Netflix, ‘show-verload’, and the paradox of choice
With so much content on offer, and more streaming services preparing to enter the market, we are reaching the point of TV burn-out.
Read more
Her friends are, too, among them Ramsay (Ilai Swindells), who has lost his job at a bar, and Isabel (Maria Angelico), who is going through a divorce and having some discipline issues with her toddler.
“We have 100 per cent tried to deal with some of those existential thoughts that have circled in all of our minds over this period,” O’Connell says.
“I don’t think we’ve got any answers I don’t think anyone does but it has been nice to percolate on them.”
Lockdown has been a complicated experience for Sharda herself.
Pallavi Sharda plays Maddie, whose future is suddenly thrown into doubt.(Supplied: ABC)
After a decade filming overseas, for roles in Bollywood productions as well as 2016’s Lion, she returned to her hometown of Melbourne as the pandemic began.
“The last three years, I have spent only three weeks in my bedroom in Bombay,” she says.
“And that’s kind of ridiculous.”
The experience of staying on home soil for an extended period not to mention going through her first Melbourne winter since she was at uni has been both confronting and re-energising, she says.
“There are a lot of tight parallels between Maddie and myself in terms of this sudden change of plans and grappling with being quite grounded,” Sharda says.
You are part of the Zoom chat
Everything you see in the first episode of Retrograde you see through the prism of the video call.
“What we have now is essentially a laptop in front of each actor, with Zoom call on it,” says Scott of the production process.
“So, they see what you see which is all of them up in a grid.”
Each of the actors were filmed in their own homes, creating a series of COVID-safe sets.(Supplied: ABC)
Attached to the back of each laptop is an iPhone. Everything is shot by those phones, with the director and cinematographer viewing footage remotely. The phones are switched out twice a day so the footage can be downloaded.
Each actor, who is filmed inside their own homes, had a technical operator on hand to help with sound, lighting and set dressing, Jackson says.
Why we watch the same TV shows and movies over and over
Watching a film or TV series you’ve seen loads of times is just like eating pasta or having a cuddle it’s comforting. Experts explain why.
Read more
“We are just experts at Zoom now,” Sharda says of her fellow actors.
“We had a guest actor on for one of the episodes