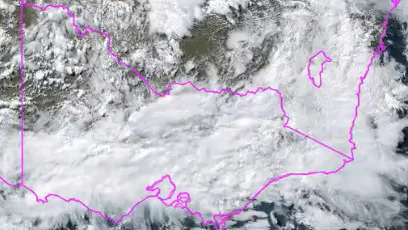 Residents on Australias east coast have been warned a low pressure system is making its way across the country which will trigger wild weather including heavy rainfall, strong winds and even flash flooding. The east coast low is slowly developing and will bring dangerous conditions to the south coast of NSW and Victoria as early as today.
RELATED: Heaviest rain for months
RELATED: Video – girl, 8, rescued from flood
According to the Bureau of Meteorology (BOM), about 200mm could fall across East Gippsland in Victoria and across the southern half of NSW with forecaster Adam Morgan predicting a “wet and windy” start to the week.
“In the most likely scenario, severe weather may begin to impact eastern NSW as early as Sunday as a low develops near the coast,” he said.
The worst of the weather is expected to hit on Monday and Tuesday with winds “strong enough to bring down trees and powerlines”.
There’s also the potential for heavy rain, road and river flooding and large seas with Mr Morgan warning dangerous beach conditions will plague the east coast.
The bureau is predicting at least 25mm of rain in Sydney on both Monday and Tuesday, with similar rainfall expected in Wollongong and Newcastle.
East Gippsland will cop with brunt of it while Melbourne and Brisbane are tipped to escape the downpour.
Rain has already reached parts of Victoria with Briagolong (48mm) and Glenaladale (30mm) seeing the worst of it. Showers are expected to continue today.
The BOM said the low pressure system would rapidly develop off the NSW coast on Monday as a high moved south of Tasmania and extended a ridge over South Australia.
Mr Morgan said it was difficult to pinpoint exactly which communities would see the worst of the weather because it depended on where, and how close to the coast, the system formed.
NSW’s leading disaster management agency Resilience NSW tweeted a warning for residents to “get ready” and follow the NSW State Emergency Service (SES) for updates.
On Sunday the NSW SES sent out a warning, encouraging residents to prepare their properties before the severe weather arrives.
“So far the NSW SES have received 24 calls for assistance overnight. Now is the time to clean your roofs, gutters and downpipes in preparation,” the organisation said on Twitter.
While Victoria’s SES has issued a flash flooding warning for Whiteheads Creek in the Seymour area.
They’re recommending Victoria residents park their vehicles under cover and away from trees, and to make sure their gutters, downpipes and drains are cleared.
The rain is expected to continue for days.