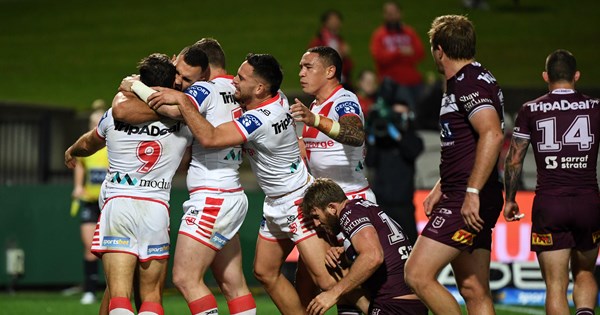 Ben Hunt’s return to the starting side and attacking sparks from Matt Dufty and Zac Lomax propelled the Dragons to a 34-4 win over Manly on Sunday.
Hunt was influential at hooker, setting up a try and booting Manly into submission by finding the open spaces of Netsrata Jubilee Stadium with kicks before the last tackle.
The Sea Eagles struck first through Joel Thompson but St George Illawarra ran in six unanswered tries – four in the second half – to secure their third victory of the year.
Without injured stars Tom Trbojevic and Dylan Walker and the suspended Addin Fonua-Blake, Manly appeared lost at times.
Dufty’s hot form continued as the fullback recorded 192 metres, 70 of which came from a scintillating first-half try against the grain, while Lomax set up two tries and scored one.
And Dragons winger Mikaele Ravalawa rattled off several monstrous hits – a couple on Brad Parker – that brought the 1571-strong crowd to their feet. He also scored a try.
Manly rung some late changes with Cade Cust replacing Lachlan Croker as starting five-eighth, Brendan Elliot coming in at fullback with Tevita Funa out and prop Morgan Boyle starting.
Second-rower Thompson, once a Dragons fan favourite, overpowered Corey Norman to score from a Daly Cherry-Evans short ball in the eighth minute.
Des Hasler’s side lacked fluency in their following forays to Dragons territory as some sloppy passing stifled their movements.
Dufty finishes off a Lomax intercept
A swirling midfield bomb that found open space looked like it could produce more Sea Eagles points but a dogged St George Illawarra again survived.
Ravalawa revved up the fans into a chant as he maintained the rage in defence.
And the noise soon increased as prop Josh Kerr burst onto a Hunt pass on the last tackle to claim his second NRL try. Lomax’s goal edged the hosts ahead after 29 minutes.
Just when it seemed the Sea Eagles would hit right back,  Dufty’s blinding speed kept St George Illawarra’s party going.
Cherry-Evans made a break but he found Lomax instead of a supporting Manly teammate. The Dragons centre linked with Dufty who scorched up the touchline to extend the lead.
St George Illawarra were lively to begin the second half with halfback Adam Clune nearly engineering a third unanswered try.
Jordan Pereira, in his first game back from a two-game suspension, earned the ire of the officials in being placed on report for a late tackle.
The fans weren’t impressed when Manly successfully challenged a knock-on call and kept possession in attacking range but they stood and applauded after the Dragons’ defence held firm.
A charging Tyson Frizell ended up in the in-goal at the other end, only for the Sea Eagles to prevent him from grounding the Steeden.
Dragons save their best till last
Dufty shot through to collect a ricocheted Norman kick before nudging ahead for himself. Jorge Taufua’s decision to tackle the pocket rocket without the ball saw him sin-binned in the 53rd minute. Lomax added a penalty goal to stretch his side’s advantage to eight.
The Sea Eagles compounded matters by making an error coming out of trouble, saved from paying the price by a Lomax handling error.
But Manly playmaker Lachlan Croker allowed the Dragons to apply more pressure when he kicked out on the full. Dufty forced a repeat set with a grubber and a lovely Lomax flick pass after the restart put Ravalawa over in the corner.
Lomax made sure of the win by taking an intercept from Cade Cust and outsprinting Elliot to the right-hand corner in the 72nd minute.
Norman sent the crowd into raptures when he collected an in-field Clune kick to dive under the posts before Euan Aitken capped off a second-half blitz.