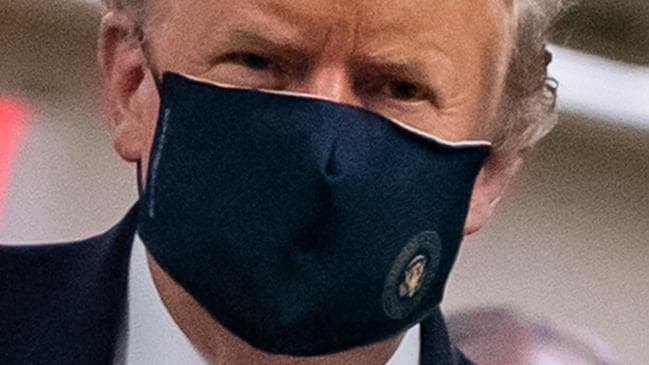 US President Donald Trump was pictured wearing a face mask for the first time during a visit to a military hospital today.Mr Trump had refused to wear one in front of the cameras for months, despite the advice of his own government.
The Centres for Disease Control and Prevention recommends Americans “wear face cloth coverings in public settings and when around people who don’t live in your household”.
Mr Trump’s decision to relent and wear a mask comes after the World Health Organisation said they should be compulsory.
In Australia, Victorians in virus hot spots are also being encouraged to wear them when they venture outside.
RELATED: Trump’s latest coronavirus excuse crumbles
Mr Trump visited wounded US service members at the Walter Reed National Medical Center, and was pictured wearing a black face mask with a presidential seal.
“I’m going to Walter Reed to see some of our great soldiers who have been injured. Badly injured. And also see some of our Covid workers, people who have such a great job,” the President told media on Thursday, a few days before his planned visit.
“And I expect to be wearing a mask when I go into Walter Reed. You’re in a hospital so I think it’s a very appropriate thing.”
RELATED: Follow our live coronavirus updates here
One presidential adviser revealed to CNN that Mr Trump’s decision to wear a mask was a result of “lots of negotiation” and continual “pleading” by aides.
The President’s rhetoric on the issue is still mixed. Today he stopped short of telling Americans they should wear masks, merely saying that they could, if they were comfortable with the idea.
“It‘s fine to wear a mask if it makes you feel comfortable,” he said.
It’s not the first time the President’s black mask has appeared over the course of the pandemic.
In May, he claimed he was wearing his black mask behind the scenes during a May visit to a Ford plant in Michigan — but it was nowhere to be seen when he emerged to speak to the media.
RELATED: Trump labelled ‘petulant child’ for not wearing mask
“I had one on before. I wore one in this back area. But I didn’t want to give the press the pleasure of seeing it,” Mr Trump said when he was asked why.
“But I had it in the back area, I did put a mask on.
“(It’s) not necessary here. Everybody’s been tested and I’ve been tested. In fact I was tested this morning. So it’s not necessary.”
Ford got in trouble for allowing Trump to walk around maskless. It later released a statement clarifying what happened.
“(Executive Chairman) Bill Ford encouraged President Trump to wear a mask when he arrived. He wore a mask during a private viewing of three Ford GTs from over the years. The President later removed the mask for the remainder of the visit,” it said.
Michigan’s Attorney-General Dana Nessel, a Democrat, was not so relaxed about the situation.
Ms Nessel had written to Mr Trump before his visit, reminding him of Governor Gretchen Whitmer’s executive order mandating the use of masks.
“Anyone who has potentially been recently exposed, including the President of the United States, has not only a legal responsibility, but also a social and moral responsibility to take reasonable precautions to prevent further spread of the virus,” she’d told him.
Shortly after the President appeared without a mask, Ms Nessel went on CNN and condemned his decision to ignore the order. She said Mr Trump was “no longer welcome” in the state.
“Today’s events were extremely disappointing, and yet totally predictable,” she said.
“His own doctor, Dr (Anthony) Fauci, his own medical expert, recommends the wearing of masks in public enclosed spaces. The CDC (Centres for Disease Control and Prevention) makes that recommendation.
“The President is like a petulant child who refuses to follow the rules.”
Mr Trump’s stance on the issue has gradually softened since. In an interview with Fox Business Channel last week, Mr Trump said he thought he was quite handsome in a mask.
“I mean I’d have no problem. Actually I had a mask on. I sort of liked the way I looked,” he said.
“It was okay. It was a dark, black mask and I thought it looked OK. It looked like the Lone Ranger.”