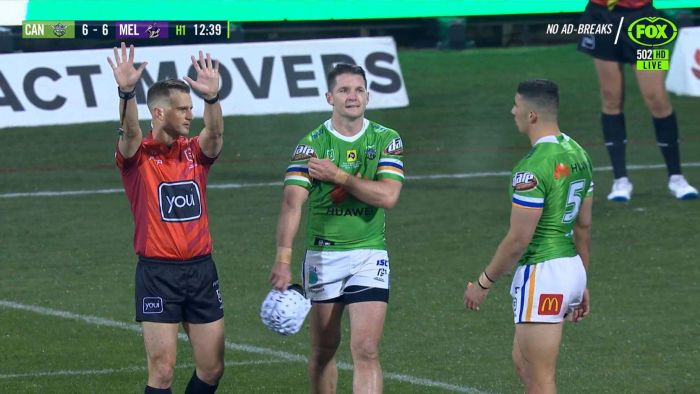 The NRL bunker will have questions to answer after attracting almost consensus disapproval over a crucial decision to send a Raiders player to the sin bin on Saturday night against the Storm.

In the 28th minute of Melbourne’s 20-14 win at Canberra Stadium, Storm half Ryley Jacks kicked through the line for winger Josh Addo-Carr.
Canberra winger Bailey Simonsson turned to chase the ball and he and Addo-Carr collided just before the tryline, with the incident sent to the bunker for further review.
While in real time it appeared to be worth a penalty and the possibility of a penalty try was even floated, the replays showed Simonsson only had eyes for the ball despite coming into contact with Addo-Carr.
“He’s going for the ball and he gets tangled up with the arms and the legs and brings Josh Addo-Carr down,” former Storm star Cooper Cronk, who was a victim of a dubious sin-binning in last year’s grand final against the Raiders, said in commentary for Fox Sports.
“There’s no doubt that Simonsson’s playing for the ball.”
After the bunker ruled no try but decided that Simonsson had committed an intentional foul off the ball, forcing a sin-binning, fellow Fox commentator Greg Alexander said it was Addo-Carr, running slightly in-field from the sideline, who had actually instigated the contact.
On replay, Bailey Simonsson clearly only had eyes for the ball.(Supplied: Fox Sports)
“He doesn’t know Addo-Carr is there. He turns late and he takes three or four steps, the ball’s there, he’s lunging for the ball Addo-Carr runs into him,” the former Penrith and NSW half-back said.
“He’s not even looking at Addo-Carr. That’s a bad call.”
On the field, Raiders captain Jarrod Croker’s response to referee Grant Atkins announcing the 10-minute break for Simonsson was measured, simply saying it was a “harsh” call, while Simonsson asked “what for?” when told he had to leave the field.
To make matters worse, hooker Josh Hodgson went down with what appeared to be a season-ending knee injury in the lead-up to the incident.
The Storm took advantage of Simonsson’s absence to touch down where he would have been defending less than a minute later.
“The try when we had a man down, we should have never been a man down, there was no way in the world he should have been sent to the sin bin,” Canberra coach Ricky Stuart said.
The bunker’s “no try” ruling was the right one, but the other decision made was tough to swallow for Ricky Stuart (top right).(Supplied: Fox Sports)
“I don’t want to make a big issue of it but I just don’t understand how we use all this technology and money and still get it wrong.
“There was no way Bailey Simonsson should have been sent from the field when he was going for the ball.
“They got it wrong, simple as that but they’ll be back in the box again next week.”
Premiership player Michael Ennis said on the television coverage there was “no way in the world that was a professional foul” and Mal Meninga said video referees Ben Galea and Steve Chiddy simply “got it wrong”.