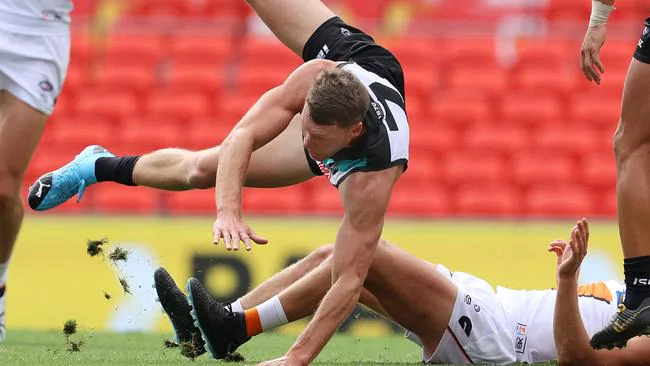 Port Adelaide veteran Brad Ebert was put on report after attempting a vicious high tackle during Sundays round six clash against the Greater Western Sydney Giants.Two minutes into the match at Metricon Stadium on the Gold Coast, Giants rookie Tom Green floated a hospital pass towards midfielder Harry Perryman in the centre square.
But before Perryman could even wrap his fingers around the Sherrin, Ebert steamed in with his left shoulder, which connected with the 21-year-old’s head.
Kayo is your ticket to the 2020 Toyota AFL Premiership Season. Watch every match of every round Live & On-Demand. New to Kayo? Get your 14-day free trial & start streaming instantly >
When Perryman hit the deck, a couple of Giants teammates quickly grabbed the Power midfielder in retaliation, but the scuffle was short-lived.
Without hesitation, the umpire immediately told Ebert we was on report for high contact, and Perryman thankfully returned to his feet.
WATCH THE INCIDENT IN THE VIDEO PLAYER ABOVE
“Fortunately, I think it was a glancing blow, as opposed to a full-on solid blow,” Hawthorn legend Jason Dunstall told Fox Footy.
“It was a silly thing to do, because his eyes were on the man, not the footy. He’ll be in trouble for that.”
“I think he has to be extremely nervous because the problem here is the ball’s not in his focus. If you look at his eyes, they appear to be on the man.
“He had the arms out initially for the ball then he takes the arm into his side and tucks it in for the hip and shoulder. So he makes a conscious decision to bump.
“We need to stamp out that action.”
Ebert awaits a decision from the Match Review Officer on whether he will be suspended for the incident.
Port Adelaide went on to win the low-scoring encounter 9.9 (63) to 6.10 (46).
Metricon Stadium had already hosted two AFL matches that weekend, and players struggled to score early on the worn surface.
Just one goal was scored in the opening quarter, with the Giants only capable of mustering one behind in the first 16 minutes.
However, last year’s grand finalists started to gain momentum in the third quarter, narrowing the deficit to three points in the final break.
“They look faster, the Giants,” triple All-Australian Nick Dal Santo told Fox Footy.
“That looked a lot more like the Giants that we’ve seen over the past fortnight … they were getting on the outside and able to move the ball freely.”
The lead was exchanged three times in a topsy-turvy fourth quarter, but Port Adelaide emerged as the eventual victors after a flurry of goals before the final siren.
Full forward Jeremy Cameron managed a match-high two goals for the Giants, while midfielder Lachlan Whitfield also impressed with 25 disposals and a goal.
With their fifth win of the season, Port Adelaide retain top spot on the AFL ladder, and are shaping up as genuine premiership contenders.
For their next fixture, the Giants will take on the Brisbane Lions at home on Saturday, while Port Adelaide will travel to the Gabba to face Carlton.