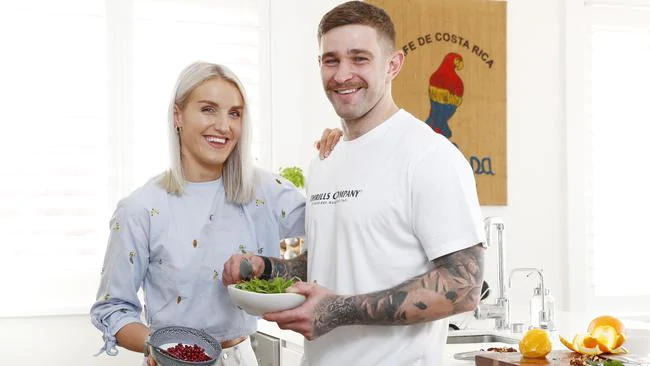 Ordering takeout has never been easier but an increasing number of Australians still prefer to cook at home.Freshly cooked recipes rule the menu at dinner time with takeout and meal kits a last resort.
But Australians are pushed for time, on a typical weeknight, the home cook takes only 18 minutes to plan and 36 minutes to prepare and cook.
New data from Australia’s top food website Taste.com.au delved into the state of Aussie dinners.
Taste’s Dinner Decoder survey of more than 6000 people found overall Australians enjoy cooking dinner with the majority of home cooks feeling satisfied (34 per cent), confident (32 per cent), motivated (27 per cent) and happy (27 per cent) planning what to cook for dinner.
In a typical week, most dinners are home-cooked, followed by takeout, eating out, leftovers or home delivery. Few Australians use meal kits.
And we’re also making healthier dinners.
Half of all Australian households cater for special dietary needs, with low calorie the most common (23 per cent), followed by vegetarian (18 per cent), gluten free (9 per cent) and diabetes friendly (10 per cent).
Other findings include more than half (52 per cent) of Australians want to cook more dinners from scratch.
But feeling tired (63 per cent) and lack of time (35 per cent) get in the way.
Australians also feel dinner requires more effort because expectations are higher with social media raising the bar, a greater sense of health awareness thrown in the mix and the “premiumisation of our lifestyle” which has extended to the ingredients we buy.
Taste.com.au has recently launched its Dinner Revolution section to help find recipes by typing in just three ingredients they have at home.
The section, which has clocked more than six million hits online, also offers recipe ideas they can prep in 10 minutes and cook in 20 minutes.
They can also choose one of the 10 most popular dinners of the day.
“I don’t know of another recipe site in the world that has made the dinner journey from planning to cooking so simple and streamlined,” Editor-in-Chief of Taste.com.au Brodee Myers-Cooke said.
“All of us at Taste genuinely believe in the power of dinner. It’s not just a proven cornerstone for so many good things – like physical and mental health, and kids’ school results – it can actually be the best part of your day.”
Sydneysiders Cara Staniforth and her boyfriend William Potter love a home-cooked dinner.
Ms Staniforth said life in lockdown had pushed them to do a lot more home cooking which was “really nice to get into”.
She said they did not use meal kits and only ordered takeaway once every couple of weeks because they were often high in calories.
“I track my calories because we’re quite fitness-focused, and while a lot of the meals are delicious, they are high in calories”.
She said she was a gluten-free pescetarian, and while her boyfriend followed a regular diet, he was “very accommodating” and often cooked meals that met her dietary requirements.
Despite their love of cooking, she conceded that sometimes it was difficult to find motivation to whip up a meal at the end of the day.
“But the more you do, the more efficient you are at it because you know what goes together and you can get dinner together a bit quicker,” she said.
“And it helps to learn a few recipes that you can follow if you know you’re short on time.”
She said she used the Taste Dinner Revolutions site on her phone regularly and loved that there was now an easy way to find quick, easy and nutritious recipes based on what was already in the pantry or fridge.
“There’s a few things that I love to eat, and my boyfriend is the same. It’s great there’s a way to generate quick and healthy meals based on a few key ingredients.”
Clinical nutritionist Michaela Sparrow said home-cooked meals were “part of our culture and part of coming together as a family”.
She said that her clients often said the least enjoyable and stressful part of home cooking was trying to figure out what to prepare and eat. But the process didn’t have to be difficult.
“My number one tip for all my clients and for busy people is to meal prep some of your meals for the week when you have some time,” she said.
“Soups, stews, casseroles are all great for meal prep as they freeze well and most taste even more delicious the next day. You can make big batches of these and get many serves out of them.”
She said families were likely to be shying away from takeaway because of the expense.
“People are also becoming more aware of the detrimental effects of highly processed foods and want to support their family’s health with healthy whole foods.”